The Torsional Rigidity of a Rectangular Prism
Previous Article in Journal

The literature suggests that effective defence against tumour cells requires contributions from both Natural Killer (NK) cells and CD T cells. NK cells are spontaneously active against infected target cells, whereas CD T cells take some times to activate cell called as cell-specific targeting, to kill the virus. The interaction between NK cells and tumour cells has produced the other CD T cell, called tumour-specific CD T cells. We illustrate the tumour–immune interaction through mathematical modelling by considering the cell cycle. The interaction of the cells is described by a system of delay differential equations, and the delay, represent time taken for tumour cell reside interphase. The stability analysis and the bifurcation behaviour of the system are analysed. We established the stability of the model by analysing the characteristic equation to produce a stability region. The stability region is split into two regions, tumour decay and tumour growth. By applying the Routh–Hurwitz Criteria, the analysis of the trivial and interior equilibrium point of the model provides conditions for stability and is illustrated in the stability map. Numerical simulation is carried out to show oscillations through Hopf Bifurcation, and stability switching is found for the delay system. The result also showed that the interaction of NK cells with tumour cells could suppress tumour cells since it can increase the population of CD T cells. This concluded that the inclusion of delay and immune responses (NK-CD T cells) into consideration gives us a deep insight into the tumour growth and helps us understand how their interactions contribute to kill tumour cells. View Full-Text
Keywords: tumour cell; immune system; delay differential equations (DDEs); stability analysis tumour cell; immune system; delay differential equations (DDEs); stability analysis
►▼ Show Figures 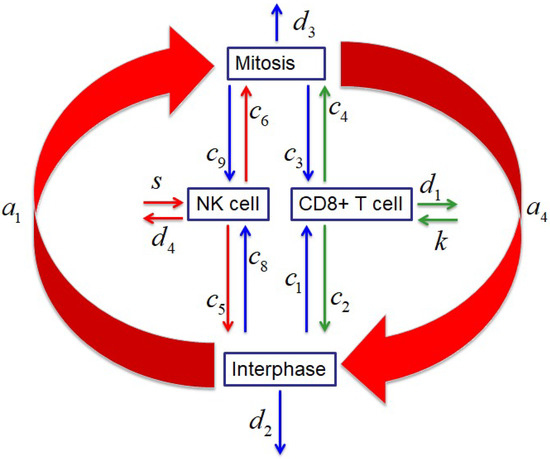