Acknowledgement to Reviewers of Proteomes in 2017
Previous Article in Journal

Background: Zinc accumulates in the embryo, aleurone, and subaleurone layers at different amounts in cereal grains. Our hypothesis is that zinc could be stored bound, not only to low MW metabolites/proteins, but also to high MW proteins as well. Methods: In order to identify the most abundant zinc binding proteins in different grain tissues, we microdissected barley grains into (1) seed coats; (2) aleurone/subaleurone; (3) embryo; and (4) endosperm. Initial screening for putative zinc binding proteins from the different tissue types was performed by fractionating proteins according to solubility (Osborne fractionation), and resolving those via Sodium Dodecyl Sulfate Polyacrylamide Gel Electrophoresis (SDS-PAGE) followed by polyvinylidene fluoride (PVDF) membrane blotting and dithizone staining. Selected protein fractions were subjected to Zn2+-immobilized metal ion affinity chromatography, and the captured proteins were identified using nanoscale liquid chromatography coupled to tandem mass spectrometry (nanoLC-MS/MS). Results: In the endosperm, the most abundant zinc binding proteins were the storage protein B-hordeins, gamma-, and D-hordeins, while in the embryo, 7S globulins storage proteins exhibited zinc binding. In the aleurone/subaleurone, zinc affinity captured proteins were late abundant embryogenesis proteins, dehydrins, many isoforms of non-specific lipid transfer proteins, and alpha amylase trypsin inhibitor. Conclusions: We have shown evidence that abundant barley grain proteins have been captured by Zn-IMAC, and their zinc binding properties in relationship to the possibility of zinc storage is discussed. View Full-Text
Keywords: metal-binding proteins; Zn-IMAC; mass spectrometry metal-binding proteins; Zn-IMAC; mass spectrometry
►▼ Show Figures 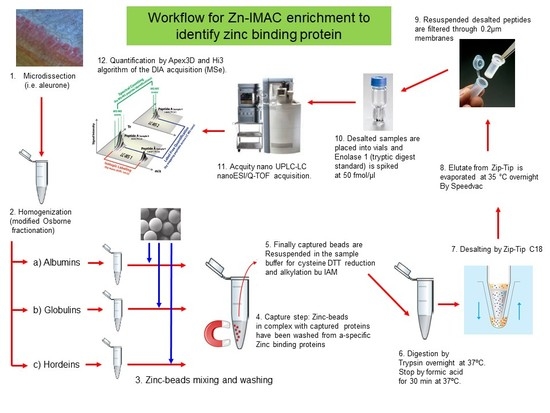