The Role of Translational Regulation in Survival after Radiation Damage; an Opportunity for Proteomics Analysis
Next Article in Special Issue

Plant Cell Wall Proteins: A Large Body of Data, but What about Runaways?

James B. Holland
4 and

In angiosperms, pollen-pistil interactions are important for the subsequent successful reproduction and formation of seed [1]. In flowering plants, interaction between pollen and pistil ascertains reproductive compatibility [2]. Gametophytic factors are important, especially those known as pollen killer genes, gametocidal genes, gamete eliminators and gamete aborters. They have been introduced in several economically important plant species such as maize [3,4], tobacco [5], wheat [6], tomato [7], lima beans [8] and barley [9]. The first gametophytic factor (gametophytic factor 1) related to segregation distortion was reported in maize. However, the pollination with Ga1 pollen only or with ga1 pollen only, led to normal genotype ratios. Due to the fastening of pollen-tube growth in pollen with Ga1 than with ga1, a mixture of Ga1 and ga1 pollen resulted in an excess of the genotypes with the linked Su allele [3].
Maize (Zea mays L.) is a model species for investigating pollen-pistil interactions, and is one of the most essential cereal crops in the world [10]. However, several maize genotypes carry genes referred to as gametophytic factors that mediate pollen-pistil interactions and subsequently impair the success of fertilization [11]. Pollen-pistil interactions are essential for the seed and fruit formation, revealing that their mechanisms are of great importance, especially for understanding the completion of the plant life cycle and for accelerating agricultural production. Recent transcriptomic and proteomic studies have improved our knowledge regarding pollen/pistil gene and protein expression and eventually, the desirable genes are possibly involved in the pollen-pistil interactions [12].
The high-throughput proteomics approach is thought to be a powerful tool for the analysis of proteins related to gametophytic factors. The proteomes of pollen have been described previously [13,14,15,16,17,18], whereas the proteome analysis of pollen and pistil is relatively not well studied. The pollen and pistil protein of maize (Zea mays L.) were analyzed using SDS-PAGE combined with MS identification. However, two-dimensional gel electrophoresis (2-DE) combined with MS analysis have provided the most potential and reliable method for proteomic investigations. Previously, 2-DE techniques combined with MALDI-TOF (matrix assisted laser desorption ionization/time of flight) MS or ESI Q-TOF (electrospray ionization quadrupole-TOF) MS/MS have been executed to investigate the proteomes during pollen development within the anther as well as proteomes of mature and germinated pollen in various plant species [13,14,15,16,17,18]. These proteomic studies have significantly promoted our knowledge of the regulation of pollen and pollen tube development at the molecular level.
In addition, in F1 hybrid production, the use of gametophytic factors has played a crucial role because it prevents pollen from contamination. However, the mechanism of gametophytic factors is still unknown. For understanding the mechanism of gametophytic factors, proteomics has been employed to analyze proteins from pollen and pistil of maize. This study was carried out to identify proteins related to gametophytic factors using protein analysis.

W22 (ga1, ga1) is a common inbred line developed by university of Wisconsin. It has a normal dent genotype; therefore, it does not carry a gametophytic factor. W22 (Ga1-s) line was created by Dr. Kermicle from university of Wisconsin by crossing with a popcorn (white cloud variety) which carries Ga1-s to W22, followed by five successive backcrossing to W22, while selecting for Ga1-s.
Seeds of W22 (ga1) and W22 (Ga1) were sown in a greenhouse in the seedling tray. After 3~4 days, it was transplanted to 6 pots and the paper bag was covered to prohibit fertilization between the pollen and pistil of same maize line during anthesis period. Within a week, one gram of maize pollen and pistil were incubated in 50 mL of 0.1 M NH4HCO3 buffer (pH 8.0) for 30 min. Then, the soluble fraction was isolated by centrifugation at 17,000× g for 30 min and dialyzed against double-distilled water overnight. The extract was lyophilized and stored at 4 °C for further use. All experiments are replicated 3 times.

CBB-stained gel slices were washed several times with 30% methanol until the colors were completely removed. Then the gel slices were destained with 10 mM NH4HCO3 in 50% ACN (Acetonitrile), squeezed for 10 min with 100% ACN (Acetonitrile) and dried by vacuum centrifugation. After destaining steps, the gel slices were reduced with 10 mM DTT in 100 mM NH4HCO3 at 56 °C for 1 h and then alkylated with 55 mM Iodoacetamide (IAA) in 100 mM NH4HCO3 in the dark for 40 min. Then the gel slices were digested with 50 μL trypsin (10 ng/µL) (Promega Corporation, Madison, WI, USA) and incubated at 37 °C for 16 h. After digestion steps, the peptides were extracted with 50 mM ammonium bi-carbonate and repeated these steps several times with a solution containing 0.1% formic acid in 50% ACN (acetonitrile) until 200~250 μL. The solution containing eluted peptides was concentrated up to drying by vacuum centrifugation and the resultant extracts were confirmed by LTQ-FTICR mass spectrometry. The dried samples were stored at 4 °C prior to mass spectrometry analysis.

All MS experiments for peptide identification were performed on a Nano-LC/MS system consisting of a Surveyor HPLC system and a 7-tesla Finningan LTQ-FTICR mass spectrometer (Therm Electron, Bremen, Germany) equipped with a nano-ESI source. Ten microliters of each sample were loaded by a Surveyor auto sampler (Surveyor) onto a C18 trap column for desalting and concentration at a flow rate of 20 μL/min. The mass spectrometer was operated in the data-dependent mode to automatically switch between MS and MS acquisition. General mass spectrometric conditions included spray voltage, 2.2 kV; no sheath and auxiliary gas flow; ion transfer tube temperature, 220 °C; collision gas pressure, 1.3 millitorrs; normalized collision energy using wide band activation mode; and 35% of MS. Ion selection threshold was 500 counts for MS/MS. An activation q = 0.25 and an activation time of 30 ms were applied in MS/MS acquisitions. Acquired MS spectra were searched using an in-house licensed MASCOT search engine (Mascot version 2.2.04; Matrix Science, London, UK). To identify the peptides, MASCOT (version 2.3.01, Matrix Science, London, UK), operated on a local server, was used to search the maize (Zea mays) database. MASCOT was used to the monoisotopic mass selected, a peptide mass tolerance of 10 ppm, and a fragment ion mass tolerance of 0.8 Da. Trypsin was selected as enzyme, with one potential missed cleavage. ESI-FTICR was selected as instrument type, and carbamidomethyl cysteine and oxidized methionine were chosen as variable modifications. All proteins identified by high-scoring peptides were considered true matches, and at least two peptide matches. The high-scoring peptides corresponded with the peptides that were above the threshold in our MASCOT search (expected p < 0.05).

SDS-PAGE was performed in order to profile proteins from the pollen and pistil. Pollen and pistil were collected from wild type W22 (ga1) and near-isogenic lines W22 (Ga1), respectively. Pollen lanes were well separated whereas pistil lanes were not clearly visual (Figure 1, Supplementary Figure 1). However, high performance LTQ-FTICR MS was used to excise the gel into 10 pieces. 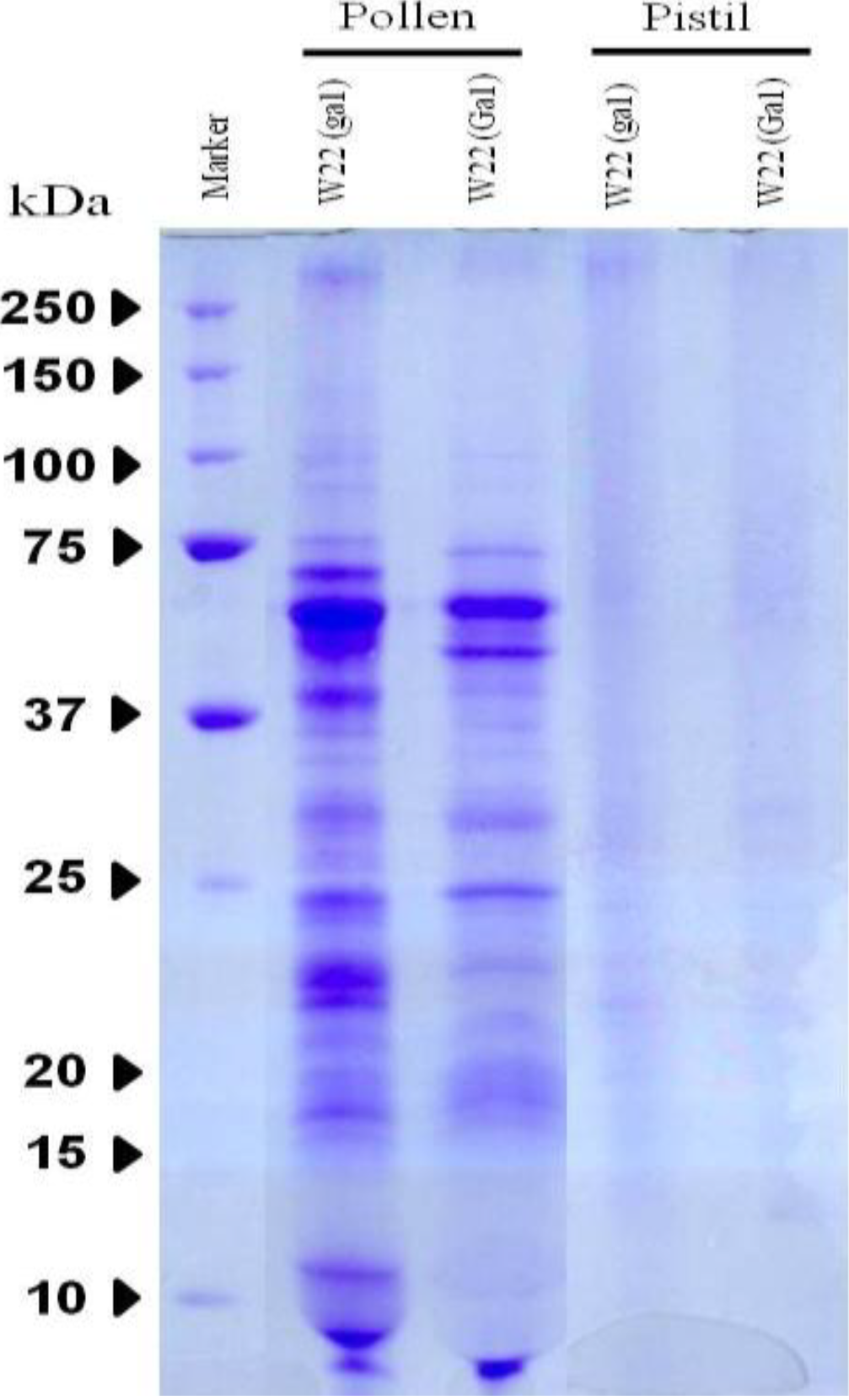 3.4. Cross-Correlation and Functional Distribution of Identified Proteins from Pollen and Pistil 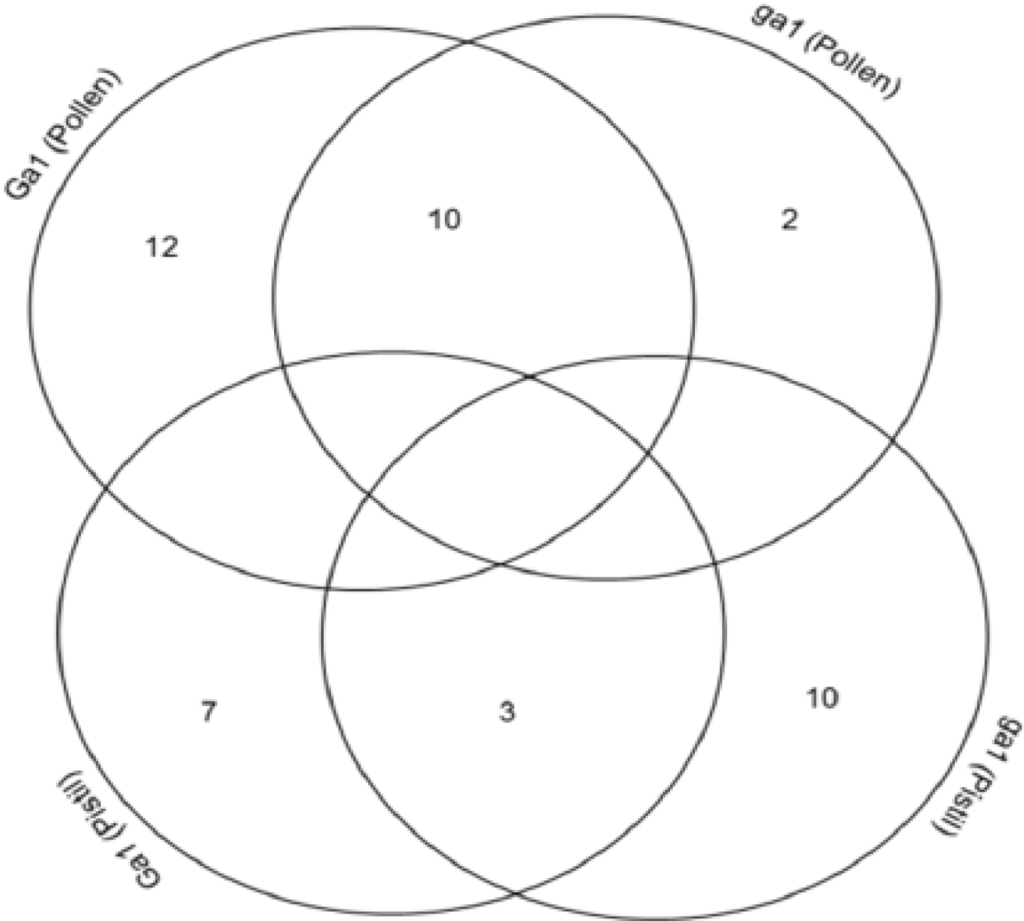 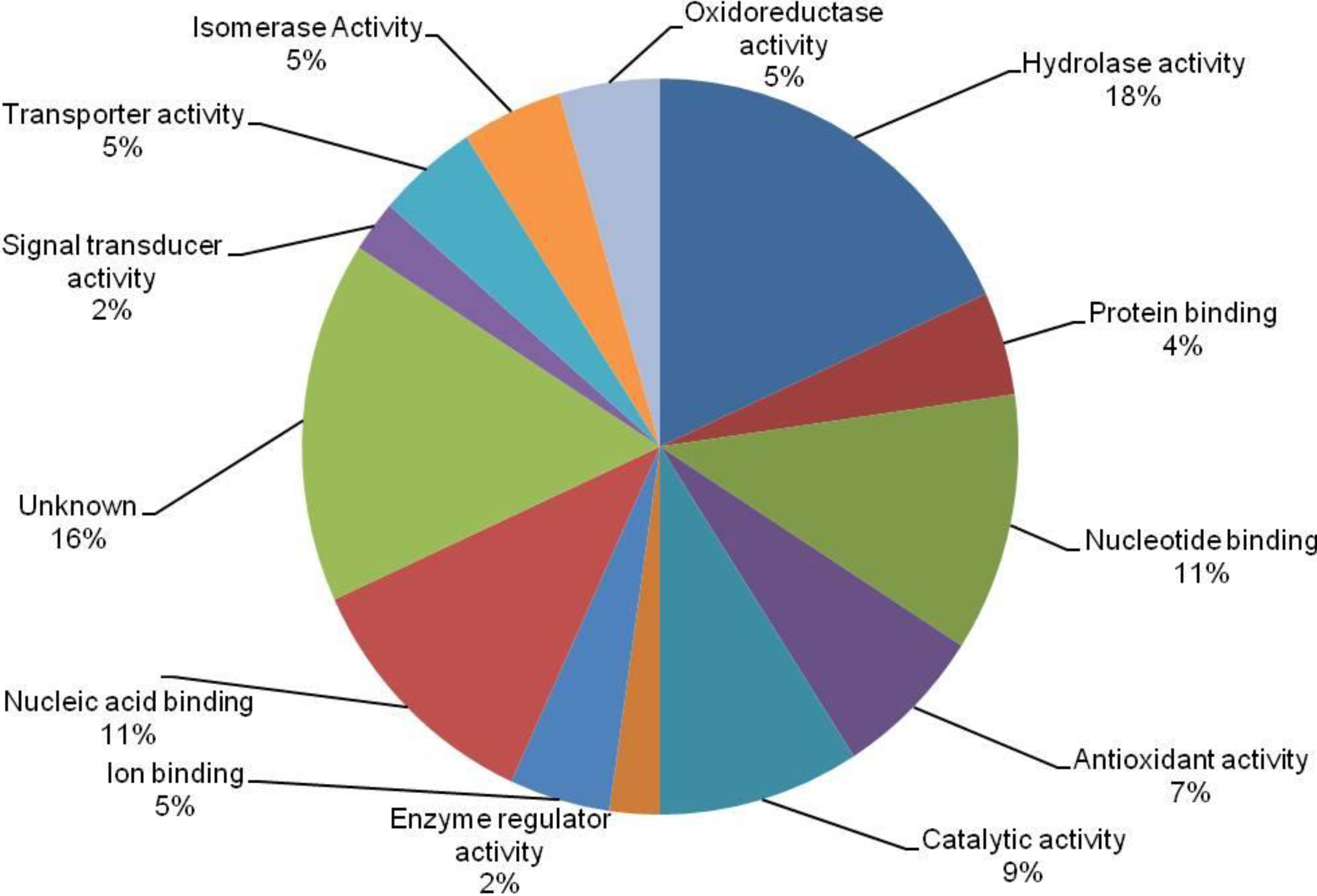 3.5. The Implication of Differentially Expressed Proteins from Pollen and Pistil of Maize

This work was supported by the research grant of the Chungbuk National University in 2011.