2. Discussion on the Theoretical Impact of Multilateral Trade Liberalization on Resource Revenue

To start with, we estimate by means of the within fixed effects estimator a static version of model (1), i.e., model (1) without the one-period lag of the dependent variable as a regressor. In particular, we correct the estimates’ standard errors using the Driscoll and Kraay (1998) technique, which helps take into account the presence of cross-sectional dependence and heteroscedasticity in the error term. We denote “FE-DK” the within fixed effects estimator. The estimates arising from the use of the FE-DK estimator could be biased due to several endogeneity issues, including the reverse causality problem associated with many regressors, as well as the absence of the one-period lag of the dependent variable as a regressor (omitted variable problem). Therefore, following the above-mentioned existing studies on the macroeconomic determinants of public revenue, we also estimate different variants of the dynamic model (1) by means of the two-step system GMM estimator proposed by Arellano and Bond (1991) and Blundell and Bond (1998). The estimation based on the GMM system approach involves a system of equations, i.e., an equation in differences with an equation in levels where lagged first differences are used as instruments for the levels equation, and lagged levels are used as instruments for the first-difference equation. Compared to the first-difference GMM estimator suggested by Arellano and Bond (1991), the two-step system GMM estimator performs better when cross-sectional variability dominates time variability and when there is a strong persistence in the time series under investigation (Blundell and Bond 1998). In addition, when the panel dataset is unbalanced, the difference GMM estimator has a weakness of magnifying gaps (see Roodman 2009). This estimator has the advantage of addressing the endogeneity problem that could stem from the presence of the one-period lag of the dependent variable as a regressor (this problem is referred to as the Nickell bias, see Nickell 1981), as well as other endogeneity issues that could arise from the estimation of model (1). Specifically, the variables “NONRESREV”, “GDPC”, and “DTP” could be considered as potentially endogenous, due to the eventual reverse causality from the dependent variable to each of these variables. Therefore, in the regressions, we consider all these three variables as endogenous. Standard errors of the estimates obtained by means of the two-step system GMM estimator are corrected using the Windmeijer (2005) finite-sample correction.
We check the validity of the two-step system GMM estimator by relying on three diagnostic tests: the Sargan test of over-identifying restrictions, which helps check the validity of the internal instruments used in the regressions; the Arellano–Bond (AB) tests of first-and second-order serial correlation, respectively denoted AR(1) and AR(2) (the null hypothesis of absence of second-order serial correlation in the disturbances should not be rejected, while the null hypothesis of absence of first-order serial correlation should be rejected). Incidentally, we report the AB test of the third-order serial correlation in the error term, denoted AR(3), to show the lack of autocorrelation at the third order in the error term. We also report the number of instruments used in the regressions, as the above-mentioned diagnostics tests may lose power if the number of instruments is higher than the number of countries (see Roodman 2009).
In a nutshell, the empirical analysis proceeds in several steps. First, we estimate a static specification of model (1) by means of the FE-DK estimator, and the estimation’s results are presented in column [1] of Table 1. We then estimate model (1) as it stands, i.e., the dynamic specification of model (1) by means of the two-step system GMM approach. The results of the estimation of this model are reported in column [2] of Table 1. Second, we estimate another specification of model (1), which allows examining whether the impact of multilateral trade liberalization on resource revenue is the same in the poorest countries and the non-poorest countries in the full sample. We consider the least developed countries (LDCs) as the poorest countries. LDCs5 constitute a group of countries designated as such by the United Nations, which consider them as the poorest and most vulnerable countries in the world. To perform the analysis, we define a dummy variable “LDC”, which takes the value 1 when a country belongs to the category of LDCs, and 0, otherwise. The list of the LDCs used in the analysis is displayed in Table A2. This LDC dummy variable is subsequently interacted with the “MTP” variable, and both the dummy variable and its interaction with the “MTP” variable are introduced in model (1). We expect that, as the poorest countries mostly rely on raw materials (including natural resources) for production and exports, and do not have a strong trade capacity6, they might not be able to take full advantage of the opportunities offered by multilateral trade liberalization by diversifying their production away from natural resources. In this context, multilateral trade liberalization (i.e., greater access to the international trade market) might increase their specialization in the production and export of natural resources, which would generate higher resource revenue to their governments. The results of the estimation of this specification of model (1) are displayed in Table 2. Before moving to the interpretation of the empirical results, we compare in Figure 1 the evolution of the variables “RESREV”, “NONRESREV” and “MTP”, using the non-overlapping 3-year average dataset. It is important to note that although the non-resource revenue is not a key variable of interest in the current analysis, its evolution has been presented in Figure 1 with a view to comparing it with that of resource revenue.
It could be observed from Figure 1 that multilateral trade liberalization has exhibited an upward trend over the period, thereby suggesting that over time, the world has witnessed greater trade liberalization, albeit steadily. In the meantime, after a decline from 10.3% in 1995–1997 to 8.4% in 1998–2000, resource revenue has steadily increased up to 14% in 2007–2009. It has then shown a declining trend to reach 10.2% in 2013–2015. Non-resource revenue has always moved in the opposite direction to resource revenue. It has remained relatively stable around 14.2% to 14.9%, from 1995–1997 to 2010–2012, and has increased from 14.6% in 2010–2012 to 16.3% in 2013–2015.

6. Further Analysis: Does the Effect of Multilateral Trade Liberalization on Resource Revenue Depend on the Degree of Domestic Trade Policy Liberalization?

This paper represents the personal opinions of individual staff members and is not meant to represent the position or opinions of the WTO or its Members, nor the official position of any staff members or even those of the staff of the CERDI- Université Clermont Auvergne. The authors would like to express their sincere gratitude to the anonymous Reviewers for their useful comments on an earlier version this paper. Any errors or omissions are the fault of the authors. 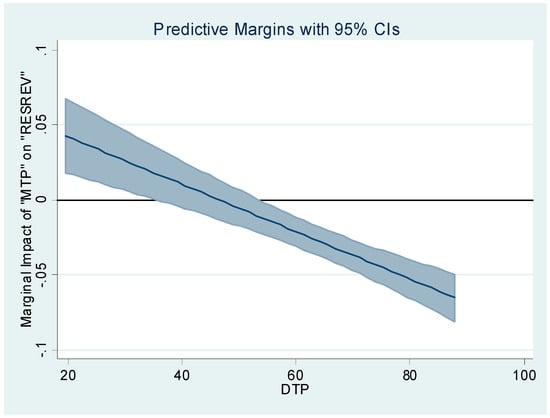