Markov Chain and Techno-Economic Analysis to Identify the Commercial Potential of New Technology: A Case Study of Motorcycle in Surakarta, Indonesia

LiFePhO4 (lithium iron phosphate) batteries, with their advantages compared to common current motorcycle batteries, are considered as an alternative in substituting wet and dry cell battery. The huge demand for motorcycles along with their batteries in Indonesia also make them an interesting product for business. To assess the commercial potential for such a new technology, market share needs to be estimated as well as the techno-economic feasibility. Hence, market share prediction using the residents of Surakarta Region and techno-economic analysis using Net Present Value (NPV), Internal Rate of Return (IRR), and Payback Period (PP) indicators were conducted in this study. Calculations using Markov chain method show that lithium iron phosphate batteries tend to dominate the market after certain period. Techno-economic analysis also finds that the commercialization is feasible in three conditions: first mover, even with market leader and equilibrium point. Therefore, there is a great commercial potential for lithium iron phosphate batteries, especially in Indonesia.
Keywords: battery; commercialization; Markov chain; new technology; techno-economic battery; commercialization; Markov chain; new technology; techno-economic

The processes of data collection in this research is illustrated in Figure 1. The first step was survey consisting of two stages. The first survey uses Questionnaire 1 which aimed to determine indicator influencing consumer in motorcycle battery purchase. Pareto chart was the tool used in this stage so that indicators considered important by customer can be developed to build the second questionnaire (Questionnaire 2). Questionnaire 2 was applied to reveal switching pattern of motorcycle battery consumer in Indonesia. Questionnaire 2 examined respondent profile, motorcycle battery currently used, type of battery that would be bought in the future and several questions to indicate which consumer is the most interested in lithium iron phosphate battery. However, with the limitation of time and personnel, the scope of the respondents’ location was limited only to Surakarta region. Nevertheless, respondents from Surakarta Region are a suitable barometer for consumer preferences in Indonesia with major increasement in motorcycle ownership.

IRR shows minimum limitation of investment feasibility where it is compared to minimum acceptable rate of return (MARR). IRR in this research uses the positive rate of NPV and negative rate of NPV to get more precise estimation by selecting the prediction for lower discount rate and higher discount rate [34,35]. Only if IRR > MARR, will the investment be considered feasible. MARR is minimum desirable interest rate of return. Equation (7) is used to calculate the IRR.
IRR: Internal Rate of Return (%)
NPV1: Present worth from total investment
NPV2: Present worth from profit in the end investment planning horizon period

The NPV is one of the financial tools employed to reveal the level of profit gained from a business. It represents the number of rupiahs today equal to future cashflow. Specifically, Net Present Value is an analysis method that represents the present value from net revenue cashflow [36]. A project will be granted whenever NPV > 0. Equation (8) shows the formula to calculate NPV. NPV: Net Present Value; C0: initial investment; Ci: business profit; i: interest rate; n: planning horizon

Techno-economic analysis also requires PP assessment to identify how long it will take to payback the capital of a particular project beside its risk. Payback Period aims to examines how long (period) an investment takes to breakeven [37]. Investment become more interesting as the PBP is sooner and the investment is feasible if the PP is sooner than desired payback time. In this study, payback period is targeted to approximately four years. Payback period is calculated by Equation (9). PP: Payback Period; Initial Investment: the amount of fund investment in the first initiation; Net cashflow: annual net profit.
The analysis results from Markov chain method provide a market share prediction of Lithium iron phosphate batteries for several periods with certain assumptions. The result of this market share prediction is then used for techno-economy analysis for several alternative predictions of market share. Alternative 1 is based on the lesser market share condition based on Markov chain method. Alternative 2 is the medium market share. Alternative 3 is more extensive market share. Techno-economy method in this research, IRR, NPV and PP, were conducted to calculate the investment feasibility based on market prediction that has been described in three alternatives. The three tools were then used to analyze the three alternatives. Then, the calculation result of each tool for each alternative was examined to gain holistic analysis on whether the investment for lithium iron phosphate battery is feasible.

The analysis of market opportunity began with two processes: the first survey that was aimed to discover consumer preference in choosing battery and the second survey that was aimed to predict consumer interest in using lithium battery. In the first survey, the data obtained through Questionnaire 1 were processed using the Pareto method to find the order of indicators that are most considered by consumers. The Pareto chart can be seen in Figure 2.
Figure 2 shows there are several indicators that influence the consumer preference in choosing battery: durability, capacity, price conformity, voltage, brand, warranty and buying price. The data from the first survey were then used in the second survey to assess the motorcycle battery specification. However, not all of the indicator from the first survey were used in the second survey; price conformality and brand were dropped. This is because the price conformality with the benefit from the battery was already represented by buying price and technical variables such as durability, capacity, and voltage. The brand indicator was not used because the product is still in development. Therefore, to assess the market share for lithium-ion based battery, the second survey was employed and then collected data that were processed using Markov chain. In the second survey, the prediction of market share primary used data gained from questionnaires from 100 respondents in Surakarta Region. These 100 correspondents represent motorcycle users in Surakarta, which has 67,789 motorcycles in operation [1]. Three states were used in this research:

1. Prime Algebra Matrix
Algebra matrix is constructed to illustrate consumer behavior transition in consuming a certain product. Questionnaire data were arranged in a matrix, as shown in Table 1.
2. Transitional Probability Matrix
Transitional probability matrix or switchover probability (P) matrix is a matrix with elements that represent customer switching probability values from a certain product or brand to another. Supposed that {Xn, n = 0, 1, 2, …} is a stochastic process which satisfies Markov chain characteristic, thus market share probability for certain period is expressed in Equation (3). The result of transitional probability matrix is demonstrated on Table 2 and Table 3 below.
3. Market Share Prediction
To estimate market share in future period, this study used Equation (6). The calculation result is shown in the following matrices and Table 4.
P × Q0 = Q1
P × Q1 = Q2
P × Q2 = Q3

The research was supported by The Ministries of Research, Technology, and Higher Education with HIBAH KOMPETENSI Research Program (Contract No. 041/SP2H/LT/DRPM/II/2016, 17 February 2016).

The authors are equally grateful to R. Rizqi Apriandy for his assistance in proof-reading. 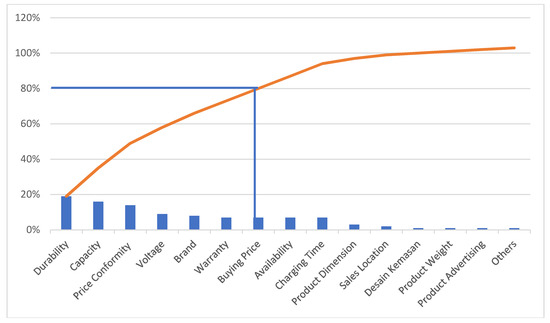 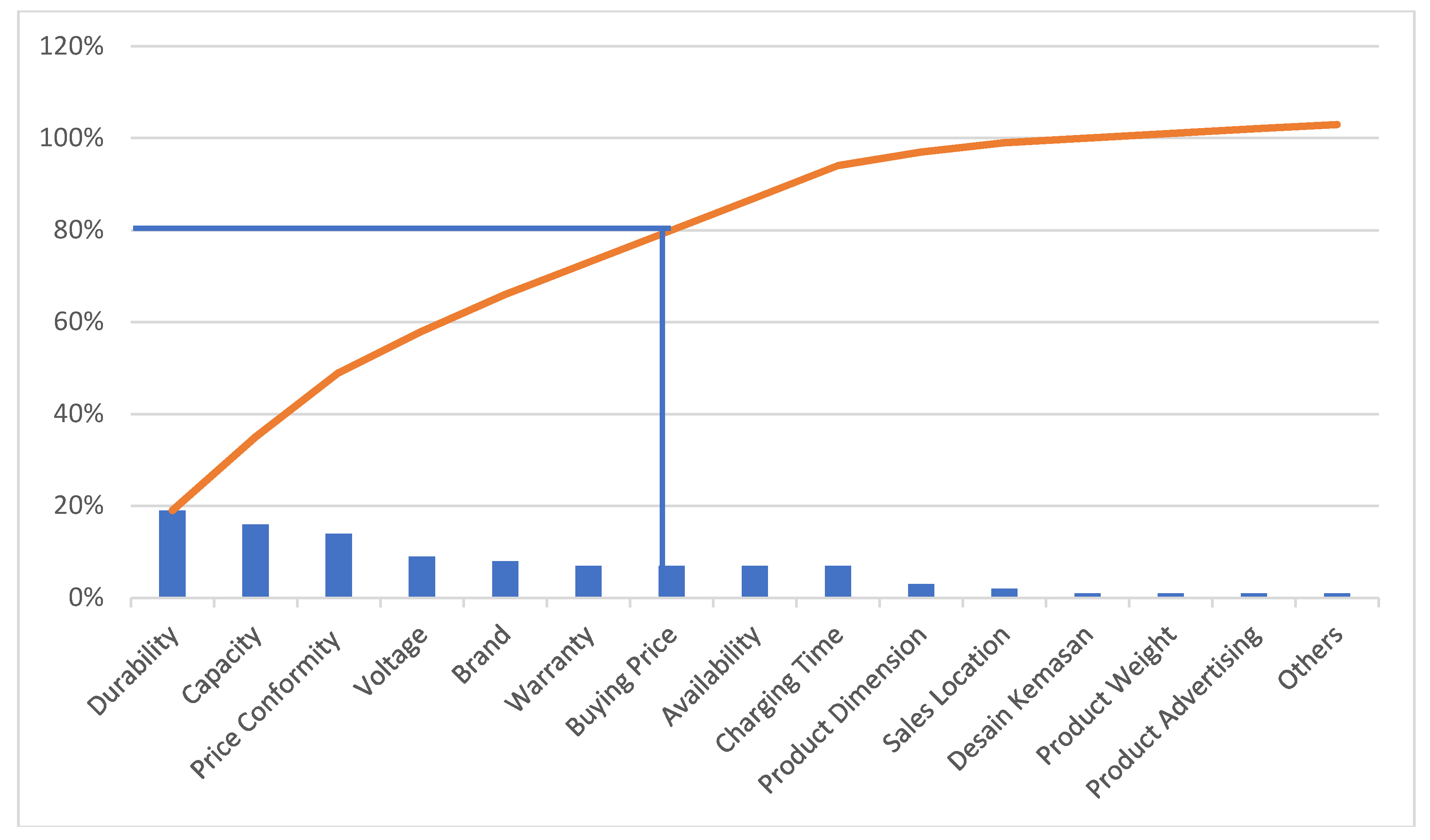 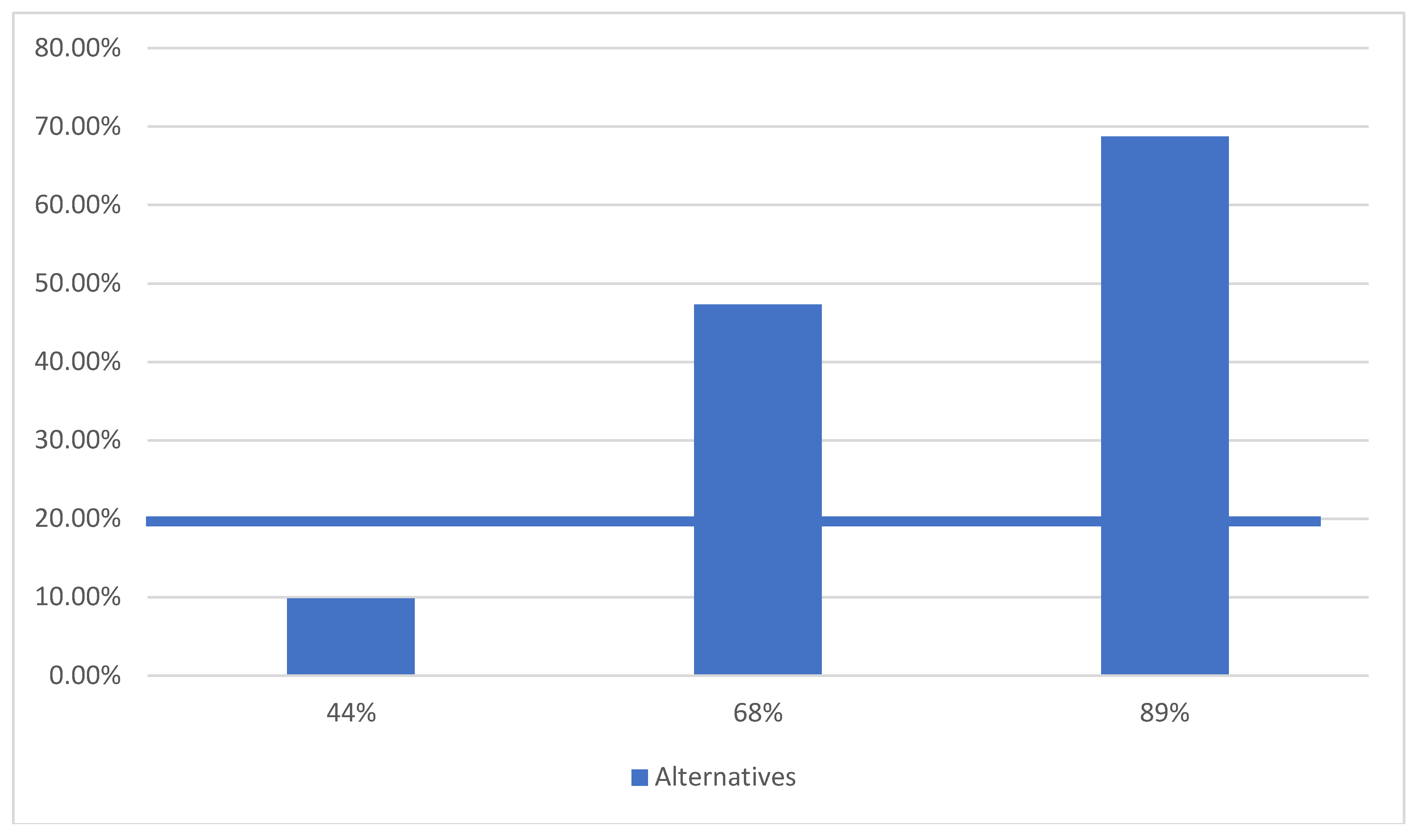 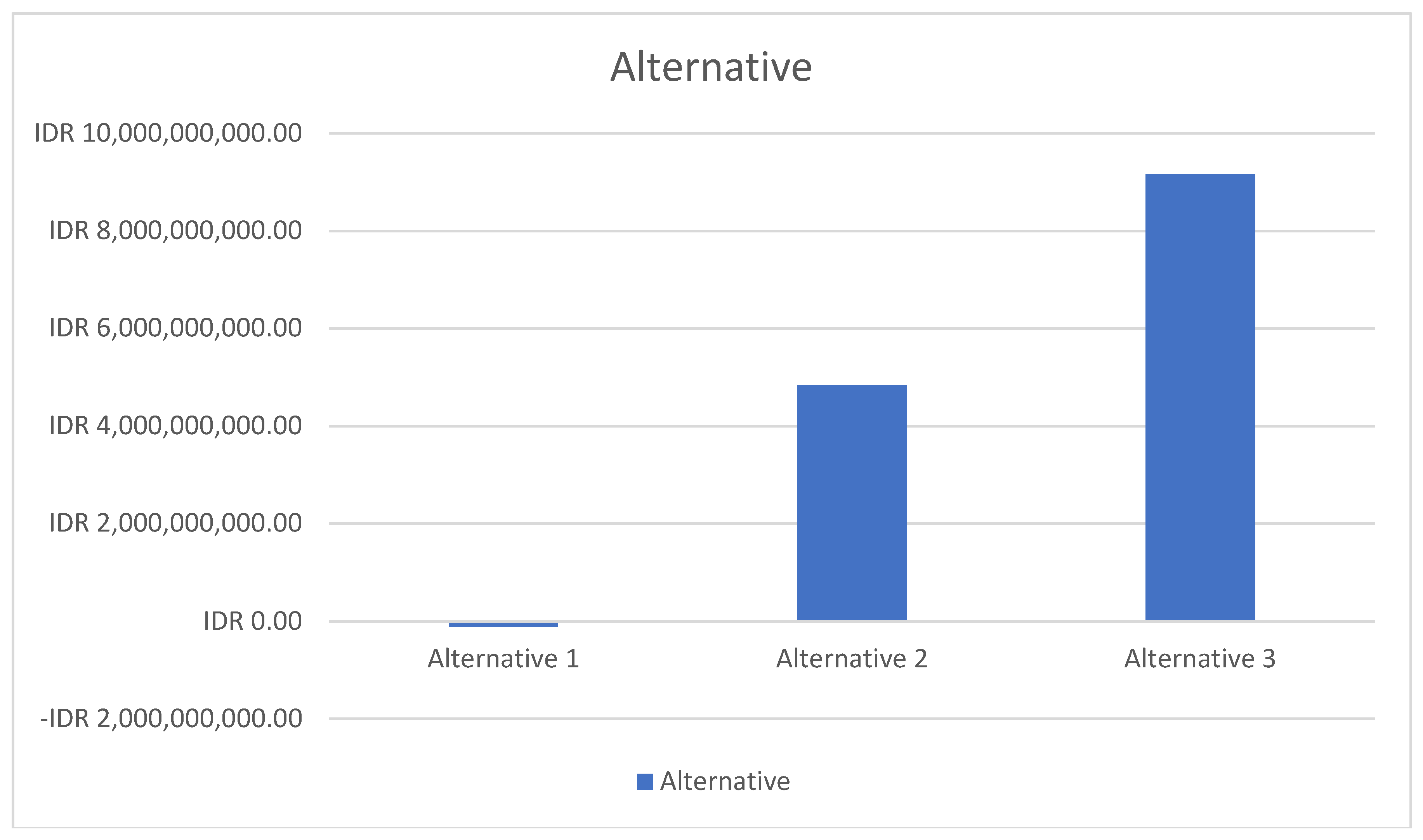 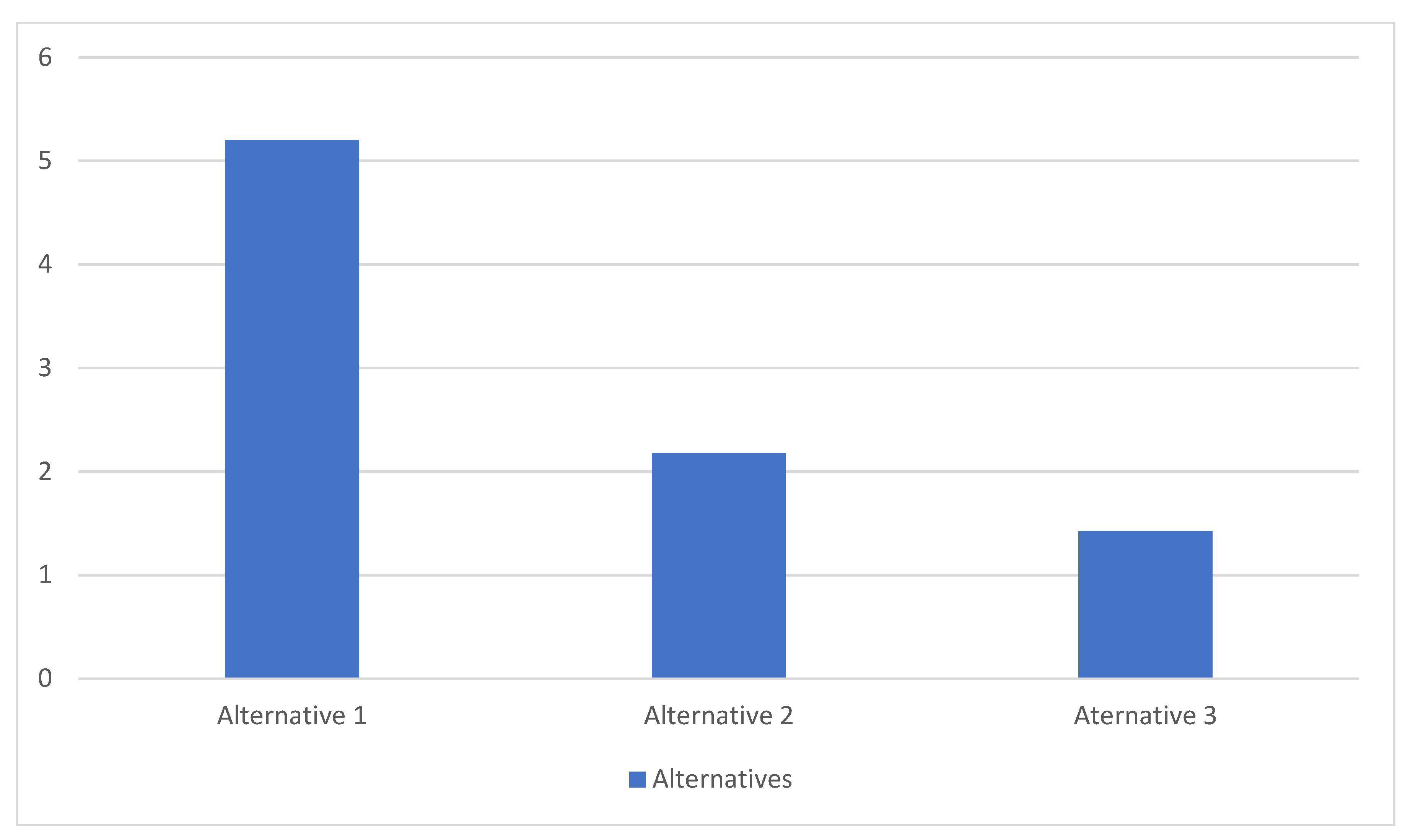 Table 11. Payback Period.
Table 11. Payback Period.
Note: Alternative 1: PP = Alternative 2: PP = Alternative 3: PP =
© 2018 by the authors. Licensee MDPI, Basel, Switzerland. This article is an open access article distributed under the terms and conditions of the Creative Commons Attribution (CC BY) license (http://creativecommons.org/licenses/by/4.0/).
We use cookies on our website to ensure you get the best experience. Read more about our cookies here.
Accept
We have just recently launched a new version of our website. Help us to further improve by taking part in this short 5 minute survey here. here.
Never show this again