This paper presents one approach to the analysis and design of post-tensioned cast-in-place concrete slab bridge decks. A Simulated Annealing algorithm is applied to two objective functions: (i) the economic cost; and (ii) the embodied energy at different stages of production materials, transport, and construction. The problem involved 33 discrete design variables: five geometrical ones dealing with the thickness of the slab, the inner and exterior web width, and two flange thicknesses; concrete type; prestressing cables, and 26 variables for the reinforcement set-up. The comparison of the results obtained shows two different optimum families, which indicates that the traditional criteria of economic optimization leads to inefficient designs considering the embodied energy. The results indicate that the objectives are not competing functions, and that optimum energy designs are close to the optimum cost designs. The analysis also showed that the savings of each kW h of energy consumed carries an extra cost of 0.49€. The best cost solution presents 5.3% more embodied energy. The best energy solution is 9.7% more expensive than that of minor cost. In addition, the results have showed that the best cost solutions are not the best energy solutions.
Keywords: energy savings; heuristic optimization; prestressed concrete structures; sustainable construction energy savings; heuristic optimization; prestressed concrete structures; sustainable construction

The optimization of concrete structures has traditionally been approached from an economic point of view. Nowadays, there has been a trend in the use of structural optimization criteria designed to reduce the environmental impact, instead of or along with the traditional economic criteria. This concern takes into account three main factors, such as economic, environmental and social. To achieve sustainable development, it is necessary to reach a consensus between three essential pillars, which tend to look for different objectives. Wass et al. [1] argued that sustainable development means that a decision-making strategy should be taken into account. To find a solution that will compromise between the different conditions and thus allow a sustainable solution to be achieved [2,3] the decision-making process can be applied.
The construction sector exploits a large number of natural resources on the planet, and has a considerable influence on the economic, environmental and social aspects of the world. The bridges are structures that allow the physical structuring of the communications, being one of the most important constructions. The results obtained from the evaluation of the social components are doubtful in many cases. For this reason, the economic and environmental components have been studied more intensely. Therefore, the objective is to obtain a bridge with the minimum cost and environmental impact. Some recent research has concluded that there is a direct relationship between the cost, the CO2 emissions and the embodied energy of the structures [4,5,6]. Thus, decreasing costs also reduces both CO2 emissions and energy.
The obtaining of lower costs or CO2 emissions have been studied for a significant number of structures; however, the reduction of energy in optimized structures has been dealt with much less [6,7,8,9,10,11]. Heuristic algorithms are frequently used in an optimization of single-target (mono-objective). Mainly, the objectives are the cost, the CO2 emissions or the embodied energy [12,13,14,15], while other works perform optimization simultaneously of different objectives (multi-objective) [16,17]. Another way of evaluating the environmental impact is to apply the life-cycle assessment process (LCA). LCA is a highly accepted method for evaluating environmental impacts [18,19,20,21,22,23]. Consequently, the minimization of embodied energy in the constructive process of the structures is not sufficiently studied and is one of the important criteria considered in sustainable constructions.
In this work a methodology capable of optimizing PC slab decks considering both economic criteria and embodied energy of the components of the structure has been developed. The embodied energy is the sum of all the energy required to extract, process, and manufacture and transport the materials (active prestressed steel, passive reinforcing steel, concrete). Also, the cost includes materials and other elements to evaluate the total cost of construction. Cost-optimized designs have been compared to those optimized for energy. This type of deck, commonly used in road construction, is one of the typologies most commonly used in countries as Spain or France for solving overpass bridges on highways of moderate lengths. Because of excessive bending deformations even under constant loads and to avoid cracking under repeated loading, most concrete bridge decks are prestressed. Therefore, the deck analyzed consists of a PC slab with active adherent reinforcement, and a concrete light-weighted gull wing section slab (Figure 1 and Figure 2). This structure is constructed with post-tensioned concrete.
The optimization of these types of structures has been traditionally approached with exact procedures [24]. These are effective methods when there are a few design variables, but computing time becomes unaffordable with large numbers of variables. The application of these methods to the prestressed slabs structures needs important simplifications in the formulation of the problem, reducing the number of variables to the necessary ones for defining the active reinforcement [25], and in the best of the cases also considering the height of the section [26]. Design variables such as passive reinforcement are not considered, and in the structural restrictions they scarcely go beyond limiting the tensions in the extreme fibers of the section [27,28]. Our research group has applied heuristic algorithms to the optimization of several structures [29,30,31,32,33,34], where supplementary references can be found. This paper describes a methodology for the prestressed concrete (PC) slab-bridge decks design typically used in road construction based on minimum embodied energy. Here, a Simulated Annealing (SA) algorithm has been applied to two objective functions, namely the embodied energy and the cost of a three-span bridge with longitudinal lengths 20.0–36.0–20.0 m and a width of 11.0 m, which is representative of a typical overpass.

Simulated Annealing (SA) is the heuristic search method used in this research. Kirkpatrick et al. [38] originally proposed this method for the design of electronic circuits. The physical process that is commonly performed for relaxing the system to a state of minimum free energy is called annealing. The SA algorithm is based on the process of annealing by applying statistical mechanics, and is inspired by the simulation of the formation of crystals of masses melt at high temperature and in a process of slow cooling. The technique allows when it reaches high temperatures, can be random configurations with higher energy than the previous ones. However, as the mass cools gradually decreases the probability of the formation of higher energy settings. The expression exp (−ΔE/T) regulates the criteria for acceptance of new solutions for the algorithm, where ΔE is the increase in the setup function that is optimized, and T is the temperature (Figure 3). New solutions are accepted when a 0 to 1 random number is smaller than the aforementioned expression. Establishing an initial temperature T0, geometrically decreasing during the process (T = kT) through a cooling coefficient k. Several iterations, called a Markov chain, are allowed at each step of temperature. The SA method is capable of surpassing local optima at high-medium temperatures and gradually converges as the temperature falls to zero. The process generates an initial solution of the values of the variables by a random choice between the upper and lower limits. The procedure continues until a feasible solution is found. The initial feasible solution is continuously modified by small movements that are performed by the variation of 7 of the 33 variables. Each modified discrete variable changes one position in the table. The initial temperature was adjusted following the method proposed by Medina [39]. The cooling coefficient and the length of the Markov Chains are obtained by a previous calibration work with values of 0.85 and 20,000, respectively. When the temperature is less than 0.2% of the initial value, or two chains run without improvement, the process stops. Computer runs were performed fifty times to obtain minimum, mean, and standard deviation of the random results. The algorithm described has been applied to a deck of three spans of 20–36–20 m of length, and 11.0 m width, considering the parameters described in Table 2. This bridge deck is a typical road overpass on highways [40]. The structural check and the algorithm were encoded in Fortran 95 language, with a compiler Compacq 6.6.0. The process ran on a personal computer with an INTEL Q6600 processor of 2.4 GHz.

Figure 4 shows the embodied energy and the cost of the one hundred optimal solutions obtained, minimizing the two objective functions. It is possible to distinguish the two families of solutions obtained by optimizing both objective functions. The main statistics of the two populations are shown in Table 3.
The optimum solution obtained considering economic criteria has a cost of 267,443.44€, with an embodied energy of 1,002,850.06 kW·h. On the other hand, the optimum solution obtained considering energy criteria has a cost of 296,191.13€, and an embodied energy of 944,517.94 kW·h. This shows that the best cost solution presents about a 5.3% more of energy, while the best energy solution is 9.7% more expensive than that of the minimum cost. In addition, it can be set that the savings of each kW·h of energy consumed carries an extra cost of 0.49€.

The design of a PC slab bridge decks is an important part of the construction of overpass bridges on highways. SA algorithm can efficiently design these types of structures. In this algorithm, a starting solution is not necessary, not even a feasible one. Two objective functions, the cost and the embodied energy of the slab bridge deck, are considered. The comparison of the results obtained shows two different optimum families, which indicates that the traditional criteria of economic optimization leads to inefficient designs considering the energy. The best cost solution presents 5.3% more embodied energy. The best energy solution is 9.7% more expensive than that of minor cost. These results exhibit the potential of SA algorithms to minimize the embodied energy design of post-tensioned cast-in-place concrete slab bridge decks. Furthermore, the results have showed that the best cost solutions are not the best energy ones. Future work will be focused on three directions: the multiobjective optimization (cost, embodied energy, and CO2 emission), the consideration of other algorithms, and a sensitivity analysis of the parameters. In addition, different structures are to be considered.

The authors acknowledge the financial support of the Spanish Ministry of Economy and Competitiveness, along with FEDER funding (Project: BIA2017-85098-R). 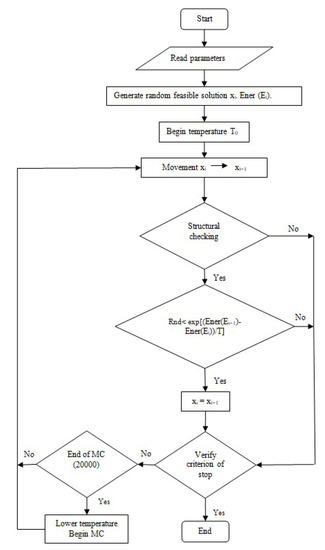 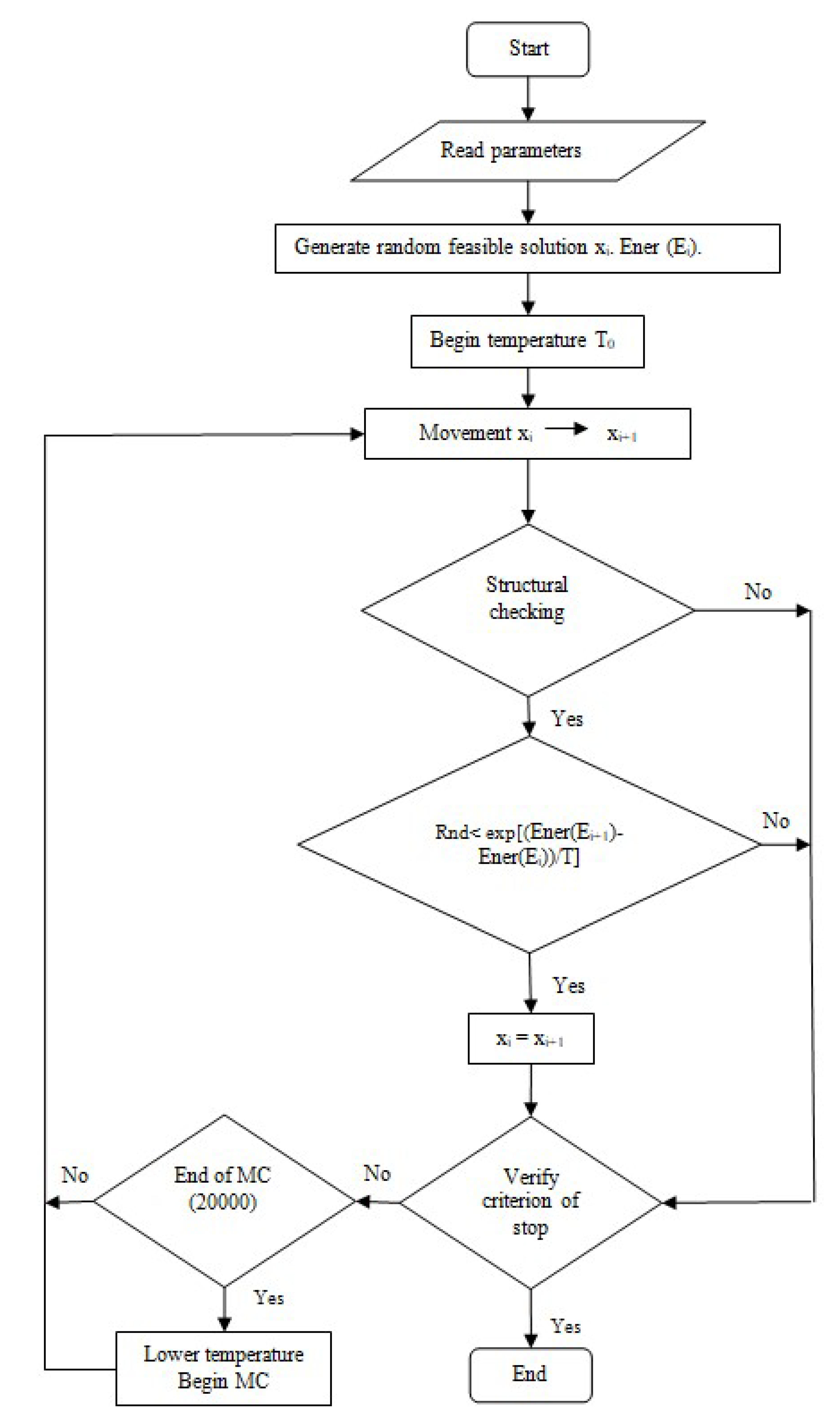