What Are Investors Afraid of? Finding the Big Bad Wolf

The Determinants of FDI in Sub-Saharan Economies: A Study of Data from 1990–2017

Foreign Direct Investment (FDI) can bring in much needed capital, particularly to developing countries, help improve manufacturing and trade sectors, bring in more efficient technologies, increase local production and exports, create jobs and develop local skills, and bring about improvements in infrastructure and overall be a contributor to sustainable economic growth. With all these desirable features, it becomes relevant to ascertain the factors which attract FDI to an economy or a group of adjacent economies. This paper explores the determinants of FDI in ten sub-Saharan economies: Liberia, Sierra Leone, Ivory Coast, Ghana, Nigeria, Mali, Mauritania, Niger, Cameroun, and Senegal. After an extensive literature review of theories and empirical research, using a set of cross-sectional data over the period 1990–2017, two econometric models are estimated with FDI/GDP (the ratio of Foreign Direct Investment to Gross Domestic Product) as the dependent variable, and with inflation, exchange rate changes, openness, economy size (GDP), income levels (GNI/capita (Gross National Income) per capita), and infrastructure as the independent variables. Over the period, higher inflows of FDI in relation to GDP appear to be have been attracted to the markets with better infrastructure, smaller markets, and lower income levels, with higher openness and depreciation in the exchange rate, though the coefficients of the last two variables are not significant. These results show the type of FDI attracted to investments in this region and are evaluated from theoretical and practical viewpoints. FDI is an important source of finance for developing economies. On average, between 2013 and 2017, FDI accounted for 39 percent of external finance for developing economies. Policy guidelines are formulated for the enhancement of FDI inflows and further economic development in this region. Such a study of this region has not been made in the recent past. View Full-Text
Keywords: determinants of FDI; FDI flows; cross-sectional analysis; sub-Saharan Africa determinants of FDI; FDI flows; cross-sectional analysis; sub-Saharan Africa
►▼ Show Figures 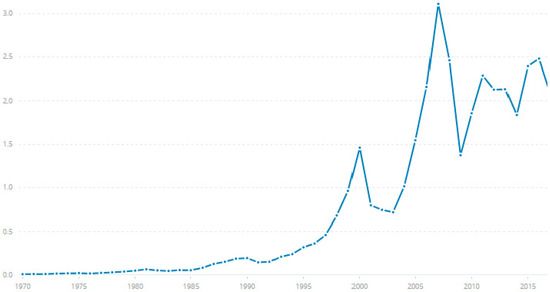