Preliminary Investigation of Pharmacist-Delivered, Direct-to-Provider Interventions to Reduce Co-Prescribing of Opioids and Benzodiazepines among a Medicare Population

Treatment of behavioral and psychological symptoms of dementia (BPSD) and comorbidities often necessitates the concomitant use of antipsychotics and non-antipsychotic drugs, thereby potentiating the risk for drug–drug interactions (DDIs). The primary objective of our study was to identify potentially clinically relevant cytochrome P450 (CYP)-mediated DDIs involving antipsychotics among participants enrolled in the Program of All-Inclusive Care for the Elderly (PACE) with BPSD. Additionally, we wanted to determine the prevalence of antipsychotic use in this population. The study included 10,001 PACE participants. The practice setting used a proprietary clinical decision support system (CDSS) to analyze simultaneous multidrug interactions. A retrospective analysis of pharmacy claims data was conducted to identify DDIs involving antipsychotics prescribed for BPSD, using snapshots of medication profiles paired with the CDSS. Of the participants who met inclusion criteria, 1190 (11.9%) were prescribed an antipsychotic; of those, 1071 (90.0%) were prescribed an atypical antipsychotic. Aripiprazole commonly caused (being a perpetrator drug 94.6% of the time) potential DDIs with antidepressants (e.g., duloxetine, venlafaxine, mirtazapine), opioids (e.g., hydrocodone, oxycodone, tramadol) and metoprolol via the CYP2D6 isoform. Risperidone commonly caused (85.7%) potential DDIs with donepezil, lamotrigine and trazodone via the CYP3A4 isoform. Quetiapine exclusively suffered (100%) from potential DDIs with amlodipine, buspirone, omeprazole or topiramate via the CYP3A4 isoform. Antipsychotics are commonly prescribed to PACE participants for BPSD treatment and they may interact with other drugs used to treat comorbidities. A thorough review of concomitant medications will help mitigate the likelihood of potentially dangerous CYP-mediated DDIs involving antipsychotics. View Full-Text
Keywords: antipsychotics; drug-drug interactions; older adults; PACE antipsychotics; drug-drug interactions; older adults; PACE
►▼ Show Figures 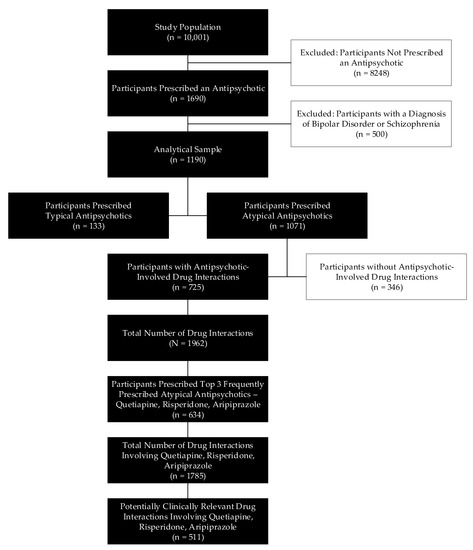