Weighing the Benefits and Risks of Medical Marijuana Use: A Brief Review

Despite the high incidence of diabetic ketoacidosis (DKA) there is no consensus on the most appropriate way to manage insulin therapy. This study was conducted to evaluate the effect of an insulin bolus on the resolution of DKA. A retrospective chart review of patients admitted between 1 September 2014 and 30 June 2016 with a diagnosis of DKA was conducted. Patients were assigned to the bolus or no bolus group based on provider preference. All patients were initiated on a 0.1 unit/kilogram (kg)/hour (h) intravenous (IV) regular insulin infusion, and patients in the bolus group were treated with a 0.1 unit/kg IV regular insulin bolus. Of the 145 admissions evaluated, 58 received a bolus and 87 did not. There was no difference in baseline demographics, except baseline blood glucose was higher in the bolus group (653 vs. 591 milligrams (mg)/deciliter (dL), p = 0.04). The time to resolution of DKA from emergency department admission did not differ between the bolus and no bolus group (15 vs. 15.9 h; p = 0.24). There was no difference in total insulin received (1.3 vs. 1.1 units/kg, p = 0.18), incidence of hypoglycemia (2 vs. 7%, p = 0.64), hypokalemia (16 vs. 29%, p = 0.65), or length of hospital stay (3.2 vs. 2.7 days, p = 0.27). The insulin bolus administration was not associated with reduced time to resolution of DKA. View Full-Text
Keywords: diabetic ketoacidosis; insulin; bolus; infusion; hyperglycemia diabetic ketoacidosis; insulin; bolus; infusion; hyperglycemia
►▼ Show Figures 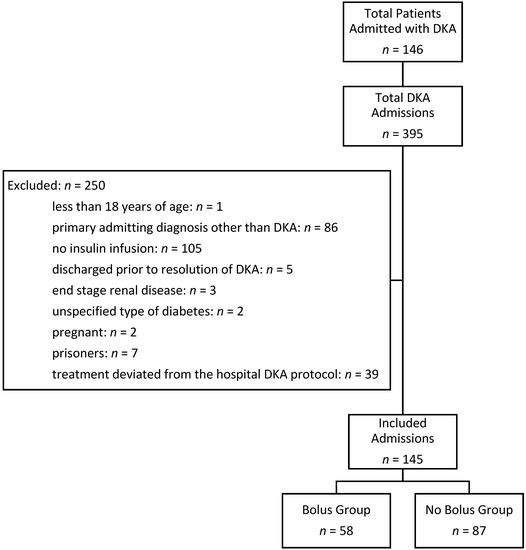