Double-Dosing and Other Dangers with Non-Prescription Medicines: Pharmacists’ Views and Experiences
Previous Article in Journal

This pilot study employed a double-blind, placebo-controlled, within-subjects crossover design. Cognitive tasks were administered during the peak period of the drug effect, between 90 and 210 min after the capsule was administered. The study design is illustrated in Figure 1.

The study was approved by the Institution Review Board for research with human subjects at the University of Rhode Island, Brown University, and the Memorial Hospital of Rhode Island in accordance with the Code of Federal Regulations (Title 45, Part 46) “Protection of Human Subjects” adopted by the National Institutes of Health and the Office for Protection from Research Risks. The study was conducted ethically in accordance with the Helsinki Declaration of 1964 (revised 2013) and the National Advisory Council on Drug Abuse Recommended Guidelines for the Administration of Drugs to Human Subjects.
Healthy college student participants (i.e., college students without ADHD or other psychiatric conditions) were recruited via campus flyers, announcements in courses, and advertisements. Interested students contacted the researchers via email or telephone and completed a telephone screening to determine initial eligibility, followed by an in-person session in which written informed consent was obtained. The Mini-International Neuropsychiatric Interview (M.I.N.I. (Version 5.0.0); [39]) was administered to exclude participants meeting criteria for other psychiatric disorders from the sample. Participants were then scheduled for a medical exam and electrocardiogram (EKG) at a local hospital. To be included in the study, participants had to be between the ages of 18 and 24, physically healthy, have a normal EKG, and not be taking any prescription medication for a chronic medical condition in the past 6 months with the exclusion of antibiotics, or birth control pills in female participants. Once cleared for the study, participants took part in two test sessions in which a capsule was administered and neurocognitive, physiological and mood assessments were conducted. Test sessions used a time-locked protocol that lasted 5.5 h apiece, with test sessions scheduled at the same time of day to eliminate circadian effects. The order of placebo and active drug was counterbalanced for order across participants. On each test day, participants arrived at the lab and completed a brief pre-protocol readiness assessment, and baseline self-report and physiological measures (heart rate, diastolic and systolic blood pressure measures). Thirty minutes after arrival, participants received an opaque capsule that contained the active drug or placebo, which was consumed with a glass of water and verified by visual inspection of the oral cavity. Amphetamine mixed salts (i.e., generic Adderall) and placebo (dextrose) were selected as the study drugs because Adderall and its generic equivalent is an FDA-approved treatment for ADHD that is prone to misuse in college populations, has a known safety profile and is one of the most commonly prescribed psychostimulants for adults with ADHD (MTA Group, 1999). The 30 mg oral dose was selected because it produces significant effects on attention in the context of ADHD, and has a well-documented safety profile in young adults [40]. Mixed amphetamine salts (30 mg oral) were compounded with dextrose filler and dispensed as individual prescriptions in opaque, colored gelatin capsules. The placebo consisted of identical gelatin capsules and contained only dextrose. The dosing schedule followed a standardized period of fasting (2 h), with neurocognitive assessment over a two-hour period 90–210 min post-consumption to ensure that cognitive assessments occurred during the peak period of pharmacological effects. Autonomic and mood assessment was conducted every 30 min (Figure 1).
Across the study, 53 college students were contacted who expressed interest in the study, 21 of who were ineligible, typically due to recreational drug use and medical conditions/medication. Seven individuals opted not to continue with the study, and one individual declined the study screening. This resulted in 24 in-person interview sessions where participants were informed of the nature of the study, provided written consent, and enrolled in the study. Four participants were excluded after enrollment, and seven dropped out post-consent due to scheduling constraints, lack of continued interest, or new medical issues not present at initial screening. The remaining 13 participants completed the study in full, yielding 26 sessions of data collection for analysis.

For each participant, the six tasks described below were administered randomly, to reduce potential order effects. For each participant, the order of tasks was recorded on the first session, and the same sequence was administered on their second test session. For all participants, Task 2 and Task 5 were never administered sequentially as they each measure aspects of oral language, and Task 6 was always presented last. An example order of task administration is presented in Figure 1. Tasks are described below.
Task 1. Digit Span Forward and Backward [41]. This task evaluates working memory and is derived from a subtest of the Wechsler Adult Intelligence Scale, fourth edition [41] For Digit Span Forward, the participant was read a sequence of numbers and was asked to verbally recall the numbers in the same order. For Digit Span Backward, the examinee was read a sequence of numbers and was asked to verbally recall the numbers in reverse order. Digit Span measures working memory, mental manipulation, cognitive flexibility, rote memory and learning, attention, and encoding. The primary dependent variable was the total age normed scaled score for digit span forward and backward. Total time to complete the Digit Span tasks was approximately 8 min.
Task 2. Story Recall subtest from the Woodcock Johnson–III [42]. This task measures aspects of oral language including language development and meaningful memory. The task required the participants to recall increasingly complex stories. After listening to a passage, the participant was asked to recall as many details of the story as they could remember. All participants began the task according to their age range as predetermined by the test’s standardized procedures. The dependent measure on the task was the WJ total age normed scale score. Total time to complete the task was 10 min.
Task 3. Conners Continuous Performance Test Third Edition [43]. The CPT 3 was administered to measure Inattentiveness, Impulsivity, Sustained Attention, and Vigilance. The administration of the CPT 3 involves 360 trials and requires respondents to press the spacebar whenever any letter, except the letter “X”, appears on the computer screen. Measures of Inattentiveness include lower Detectability (d’), a larger number of Omissions and Commissions, a slower Hit Reaction Time (HRT), as well as greater inconsistencies in response speed (HRT Standard Deviation and Variability). On the other hand, a faster HRT and a larger number of Commissions and/or Perseverations serve as a measure of Impulsivity. T-scores for HRT, errors of Omission and Commission and Variability were the dependent variables. Time to complete the CPT 3 was 14 min.
Task 4. The Behavior Rating Inventory of Executive Function, Adult version (BRIEF-A; [44]). This standardized, norm referenced, self-report instrument measures executive functions and self-regulation abilities in daily living. The three dependent variables from the BRIEF-A were total scores from the Behavioral Regulation Index (BRI), Metacognition Index (MI), and Global Executive Composite (GEC). The BRIEF-A was included to gather information regarding the potential drug effect of Adderall on participants memory of past cognition and self-regulation ability. Time to complete task was approximately 10 min.
Task 5. Gray Oral Reading Tests−Fifth Edition (GORT-5; [45]). This task measures oral reading rate, accuracy, fluency, and comprehension. There are two test forms, each containing 14 reading sequences and relevant questions. The dependent variable was the Oral Reading Index scaled score, which provides a combined measure of reading fluency and comprehension. Time to complete the task was approximately 20–30 min.
Task 6. Perceived Drug Effect Self-Report (PDE-SR) [29] This is a one-item measure of whether participants perceived the drug as influencing their performance on neurocognitive tasks and was administered at the end of neurocognitive testing. The measure reads: ‘The following question refers to all tests completed TODAY. How and how much did the drug influence (either positively or negatively) your performance on the tests? Please use the scale below. Your answer can be any number between 1 and 100.” The scale was a line, ranging from 1 to 100, labeled as follows: 1 = “drug impaired my performance extremely”; 25 = “the drug somewhat impaired my performance”; 50 = “the drug had no effect”; 75 = “the drug somewhat improved my performance”; 100 = “the drug improved my performance extremely.” The dependent variable was the self-reported score of the perceived drug effect on neurocognitive performance.

On measures of executive functioning (i.e., CPT 3) Adderall significantly reduced Variability t(10) = −2.25, p = 0.02, and marginally reduced Commission Errors, t(10) = −1.74, p = 0.056, and Hit Reaction Time t(10) = −1.47, p = 0.086 (see Table 1 and Table 3), collectively supporting that Adderall improved attention skills. CPT 3 effects are illustrated in Figure 4 and Figure 5. In contrast, Adderall worsened working memory on Digit Span Forward, t(12) = −1.80, p = 0.048 (Table 1 and Table 3). Working memory effects are in Figure 6. There were trend-level drug effects on BRIEF-BRI, t(12) = 1.54, p = 0.075; and BRIEF-GEC, t(12) = 1.35, p = 0.10, with a marginal worsening of participants perceptions of their past cognitive and self-regulation executive functioning in daily activities under Adderall compared to placebo. Adderall effects on the GORT and WJ were not statistically significant (p > 0.13 and 0.23, respectively; n.s.) suggesting that Adderall neither improved nor impaired reading performance. There were no statistically significant effects of Adderall on participants’ perceptions of whether the drug affected their own task performance, p = 0.30.

We would like to thank Eva Stolz and Sinda Fekir for their efforts in data collection and for assistance with the figures.

The authors report no competing biomedical financial interests or potential conflicts of interest. The founding sponsors had no role in the design of the study; in the collection, analyses, or interpretation of data; in the writing of the manuscript, and in the decision to publish the results. 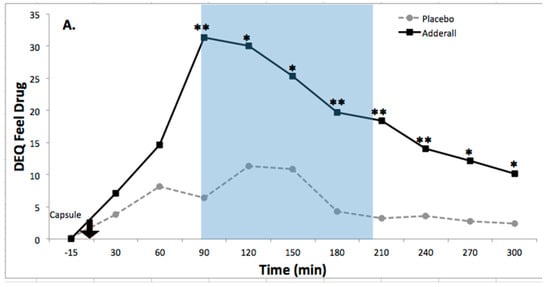 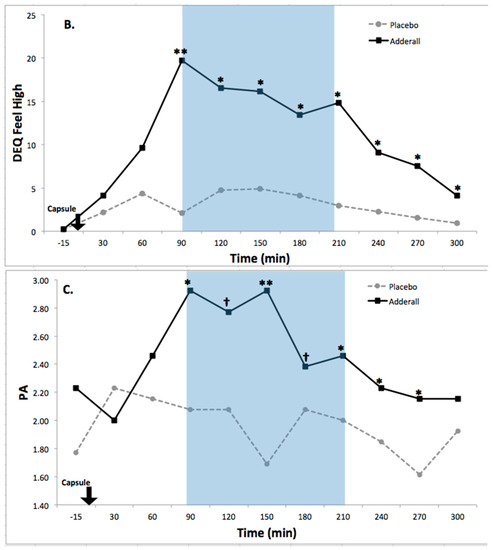 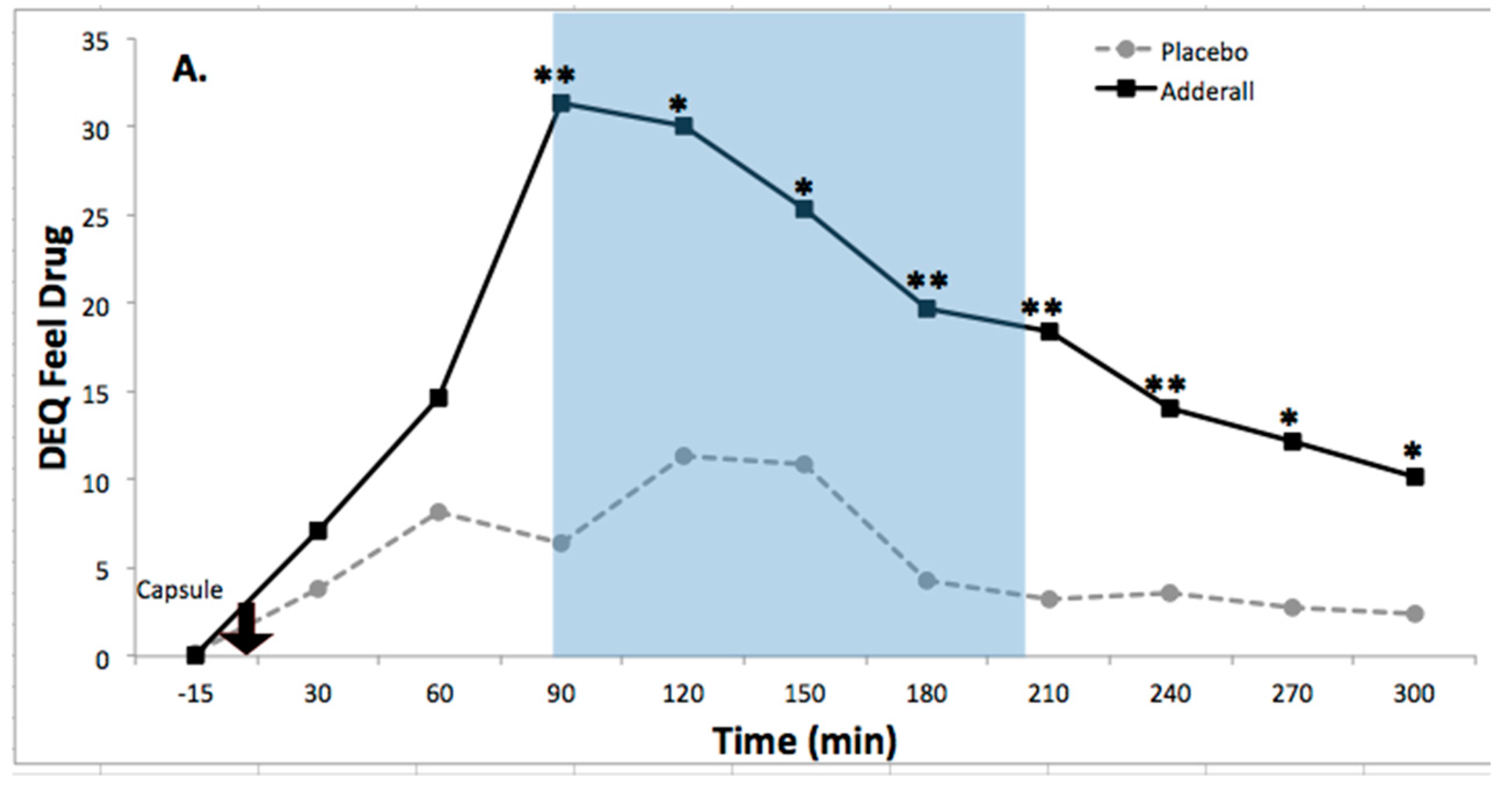 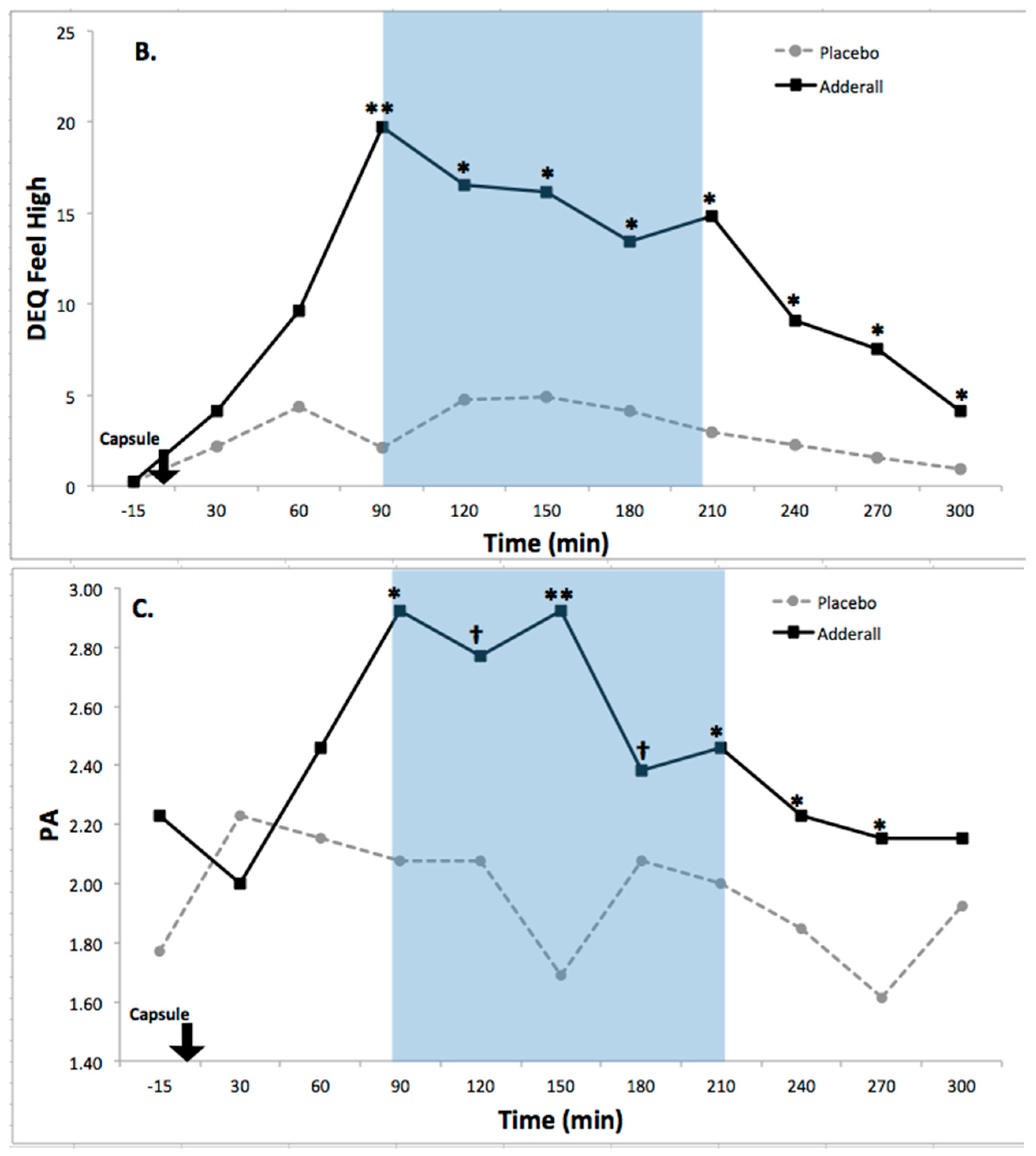 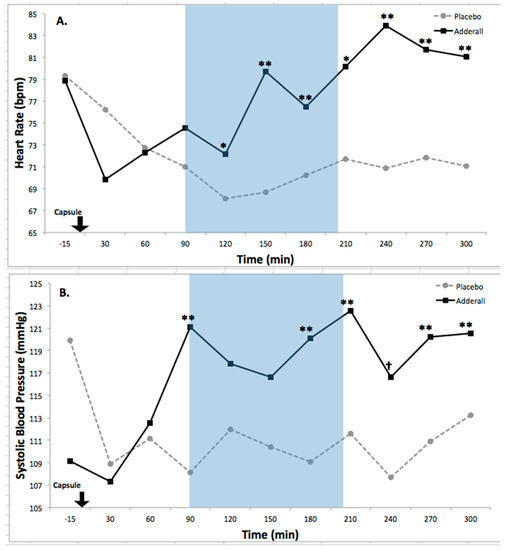 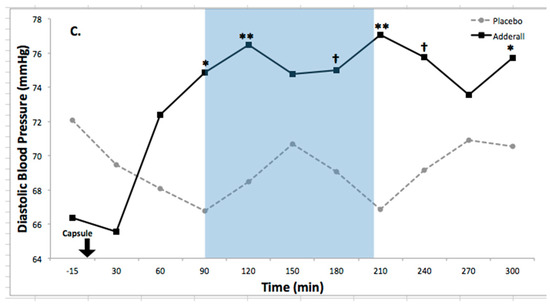 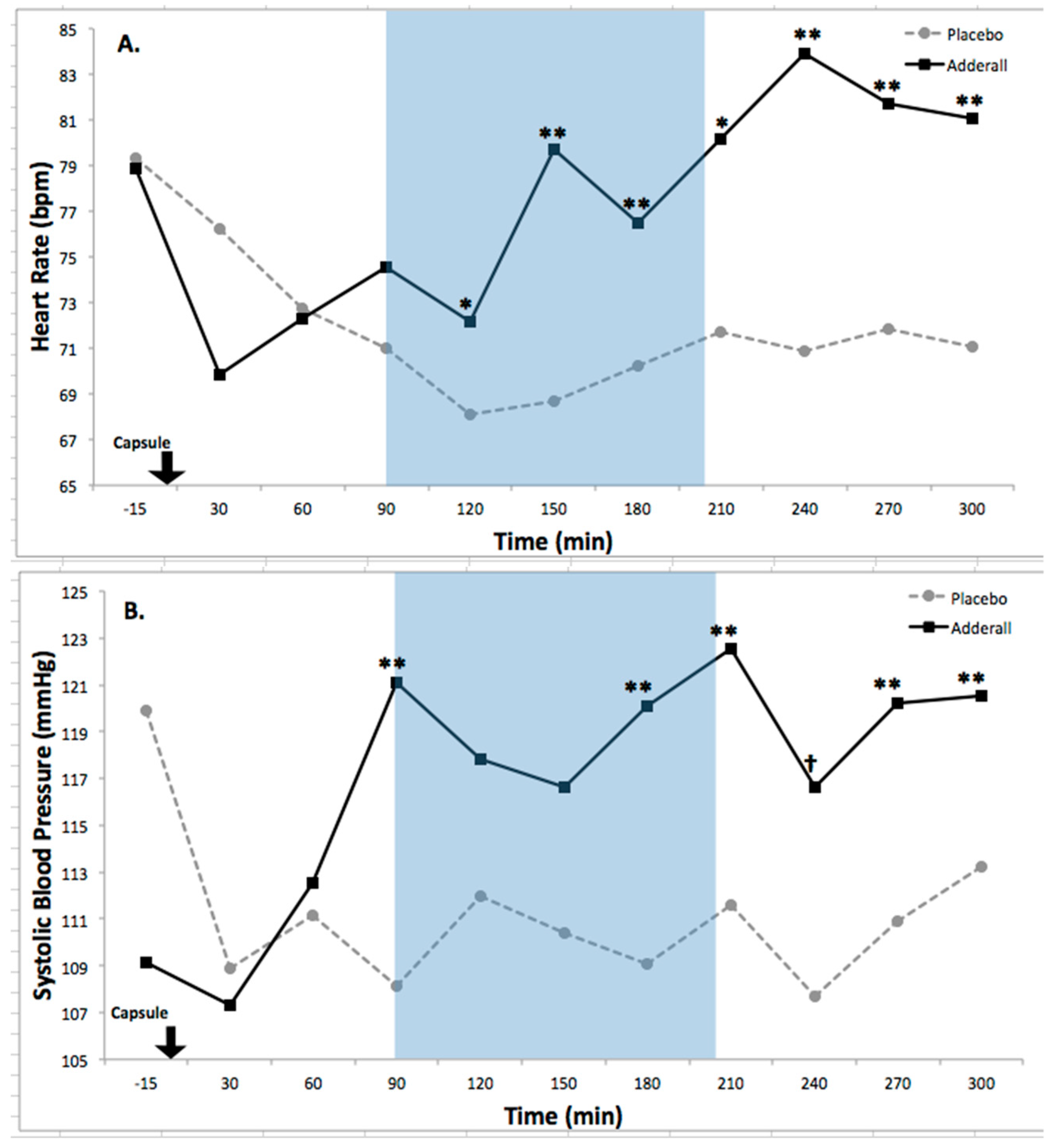 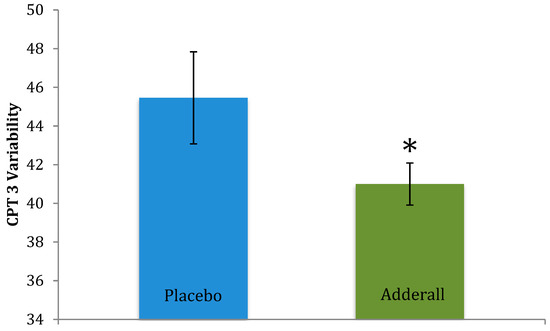 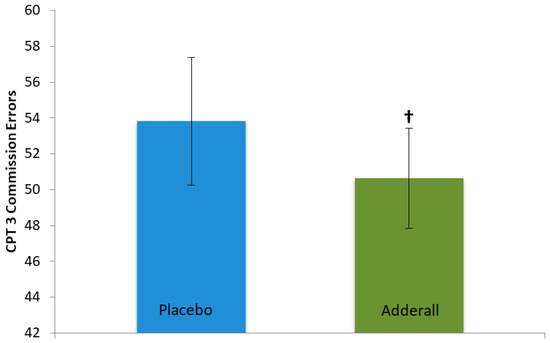 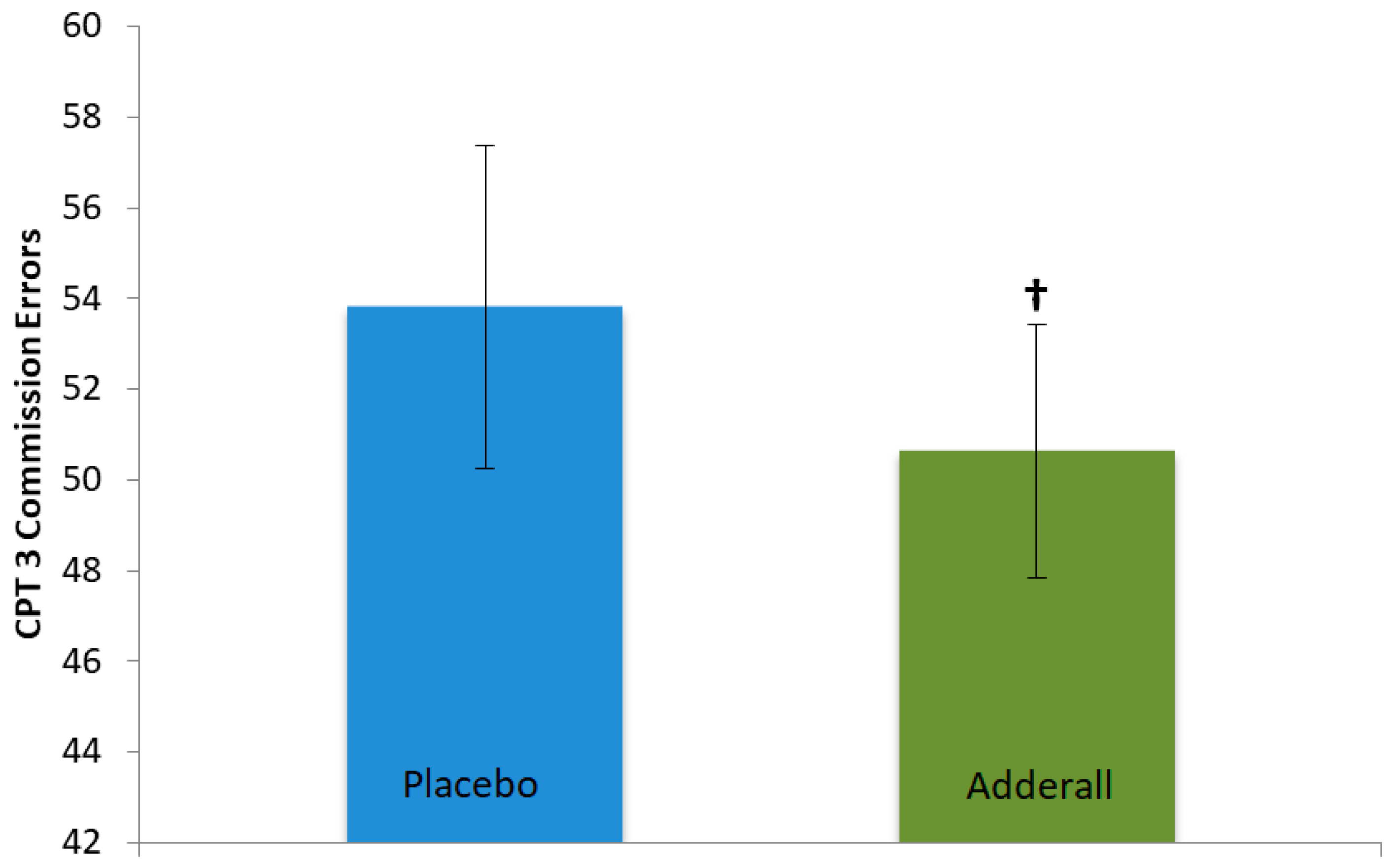 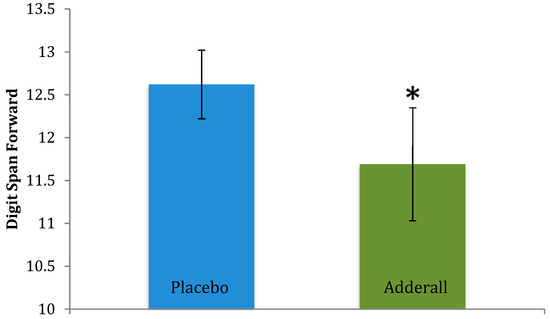 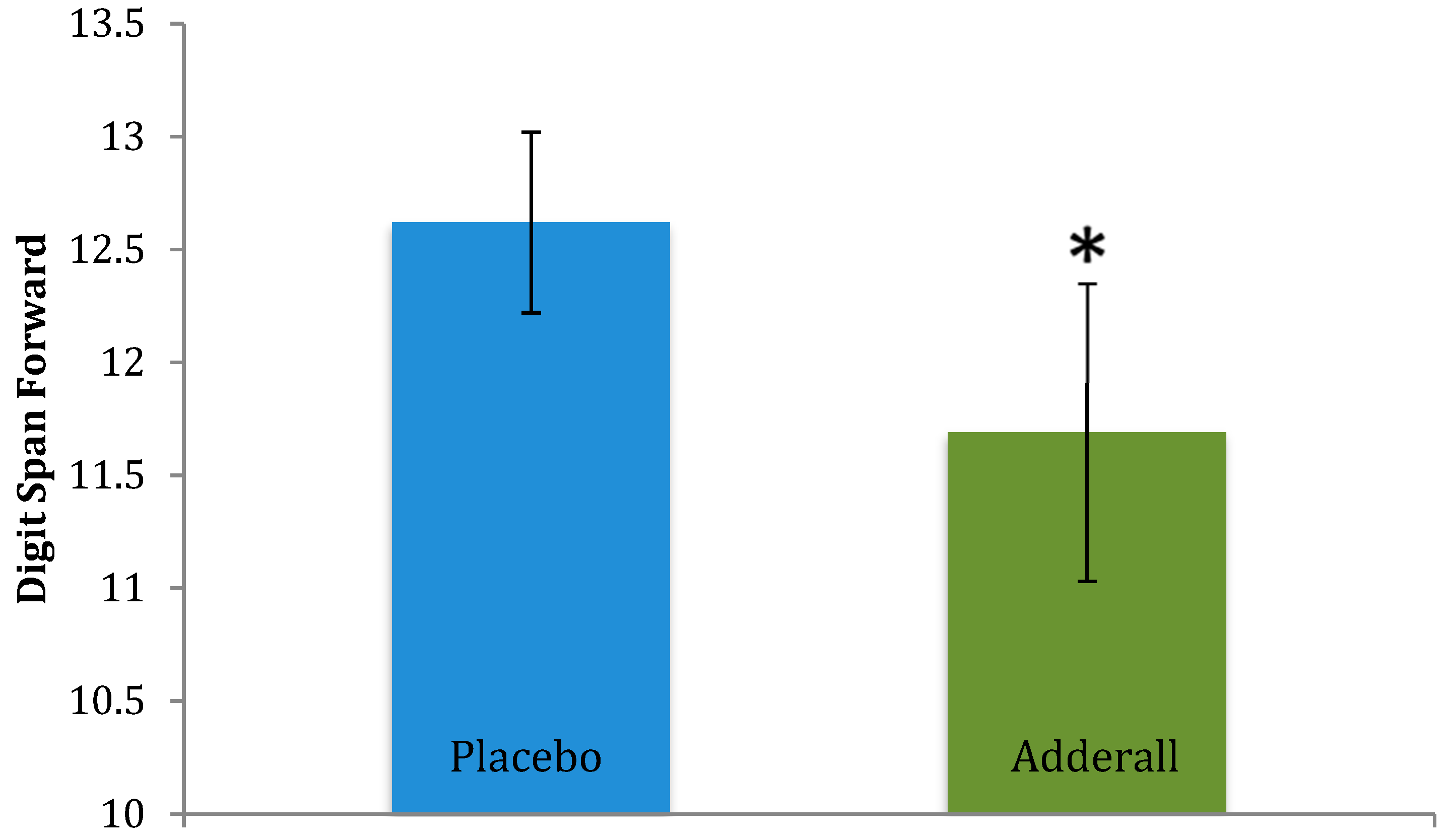 Table 3. Specific Adderall Effects on Neurocognition.
Table 3. Specific Adderall Effects on Neurocognition.
Note: Improved = participant performance was improved under the effects of Adderall. Worsened = participant performance worsened under the effects of Adderall. More negative perceptions = participant perceptions of their executive functioning in daily activities were more negative, based on their responses to the BRIEF-A. BRIEF-A—BRI = Behavior Rating Inventory of Executive Function, Adult version—Behavior Regulation Index; BRIEF-A—GEC = BRIEF-A—Global Executive Composite; CPT 3 = Conners’ Continuous Performance Test—Third Edition; Medium effect sizes are in italics. Small effect sizes are in normal font. * = significant at the 0.05 level; † = marginally significant. N = 13 participants in each drug condition, 26 sessions.
© 2018 by the authors. Licensee MDPI, Basel, Switzerland. This article is an open access article distributed under the terms and conditions of the Creative Commons Attribution (CC BY) license (http://creativecommons.org/licenses/by/4.0/).
We use cookies on our website to ensure you get the best experience. Read more about our cookies here.
Accept
We have just recently launched a new version of our website. Help us to further improve by taking part in this short 5 minute survey here. here.
Never show this again