Using Continuing Professional Development with Portfolio in a Pharmaceutics Course

Vancomycin trough concentrations should be measured within 30 min of the next dose, but studies have shown that troughs are often measured too early, producing erroneous results that could lead to dosing errors. The purpose of this study was to identify the frequency of early trough measurements and to evaluate whether pharmacokinetically extrapolating mistimed concentrations may locate sub-therapeutic concentrations. Vancomycin troughs were retrospectively reviewed. For troughs ≥10 mg/L and measured >0.5 h early, the true trough was estimated using pharmacokinetic extrapolation methods to identify sub-therapeutic outcomes. Differences ≥2 mg/L between the measured and estimated true trough level was considered to have potential clinical significance. Of 143 troughs evaluated, 62 (43%) were measured too early and 48 of those troughs were ≥10 mg/L. 25% of those 48 troughs were sub-therapeutic. The potential for a difference ≥2 mg/L between the measured and estimated true trough was found to be greatest when the measured trough was ≥10 mg/L, the patient’s creatinine clearance (CrCl) was ≥60 mL/min, and the timing error was ≥2 h. To increase the therapeutic utility of early vancomycin trough concentrations, estimated true troughs can be determined by extrapolating measured values based on the time difference and CrCl. View Full-Text
Keywords: vancomycin; therapeutic drug monitoring; trough; serum concentration; pharmacokinetic dosing vancomycin; therapeutic drug monitoring; trough; serum concentration; pharmacokinetic dosing
►▼ Show Figures 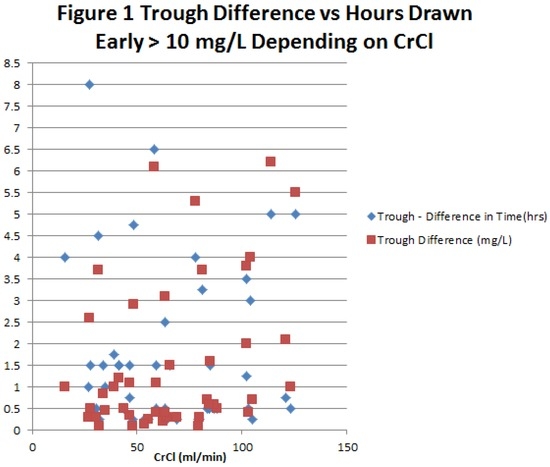