Optical communication is becoming more prevalent in orbit due to the need for increased data throughput. Nanosatellites, which are satellites that typically weigh less than 10 kg, are also becoming more common due to lower launch costs that enable the rapid testing of technology in a space environment. Nanosatellites are cheaper to launch than their larger counterparts and may be a viable option for communicating beyond Earth’s orbit, but have strict Size, Weight, and Power (SWaP) requirements. The Miniature Optical Communication Transceiver (MOCT) is a compact optical transceiver designed to provide modest data rates to SWaP constrained platforms, like nanosatellites. This paper will cover the optical amplifier characterization and simulated performance of the MOCT amplifier design that produces 1 kW peak power pulses and closes three optical links which include Low Earth Orbit (LEO) to Earth, LEO to LEO, and Moon to Earth. Additionally, a benchtop version of the amplifier design was constructed and was able to produce amplified pulses with 1.37 W peak power, including a 35.7% transmit optics loss, at a pump power of 500 mW. Finally, the modulator, seed laser, amplifier, receiver, and time-to-digital converter were all used together to measure the Bit Error Ratio (BER), which was 0.00257 for a received optical peak power of 176 nW. View Full-Text
Keywords: optical communication; laser; nanosatellite; CubeSat; EDFA; transceiver; PPM; BER optical communication; laser; nanosatellite; CubeSat; EDFA; transceiver; PPM; BER
►▼ Show Figures 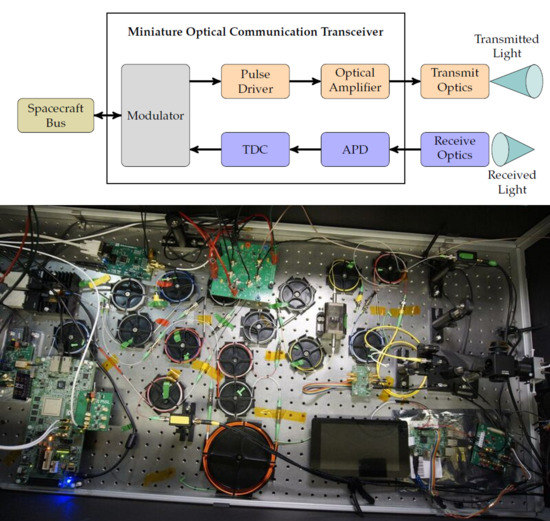