Application of an Online-Coupled Regional Climate Model, WRF-CAM5, over East Asia for Examination of Ice Nucleation Schemes: Part I. Comprehensive Model Evaluation and Trend Analysis for 2006 and 2011

Aerosol particles can affect cloud microphysical properties by serving as ice nuclei (IN). Large uncertainties exist in the ice nucleation parameterizations (INPs) used in current climate models. In this Part II paper, to examine the sensitivity of the model predictions to different heterogeneous INPs, WRF-CAM5 simulation using the INP of Niemand et al. (N12) [1] is conducted over East Asia for two full years, 2006 and 2011, and compared with simulation using the INP of Meyers et al. (M92) [2], which is the original INP used in CAM5. M92 calculates the nucleated ice particle concentration as a function of ice supersaturation, while N12 represents the nucleated ice particle concentration as a function of temperature and the number concentrations and surface areas of dust particles. Compared to M92, the WRF-CAM5 simulation with N12 produces significantly higher nucleated ice crystal number concentrations (ICNCs) in the northern domain where dust sources are located, leading to significantly higher cloud ice number and mass concentrations and ice water path, but the opposite is true in the southern domain where temperatures and moistures play a more important role in ice formation. Overall, the simulation with N12 gives lower downward shortwave radiation but higher downward longwave radiation, cloud liquid water path, cloud droplet number concentrations, and cloud optical depth. The increase in cloud optical depth and the decrease in downward solar flux result in a stronger shortwave and longwave cloud forcing, and decreases temperature at 2-m and precipitation. Changes in temperature and radiation lower surface concentrations of OH, O3, SO42−, and PM2.5, but increase surface concentrations of CO, NO2, and SO2 over most of the domain. By acting as cloud condensation nuclei (CCN) and IN, dust particles have different impacts on cloud water and ice number concentrations, radiation, and temperature at 2-m and precipitation depending on whether the dominant role of dust is CCN or IN. These results indicate the importance of the heterogeneous ice nucleation treatments and dust emissions in accurately simulating regional climate and air quality. View Full-Text
Keywords: WRF-CAM5; East Asia; ice nucleation parameterization; dust emissions; sensitivity study WRF-CAM5; East Asia; ice nucleation parameterization; dust emissions; sensitivity study
►▼ Show Figures 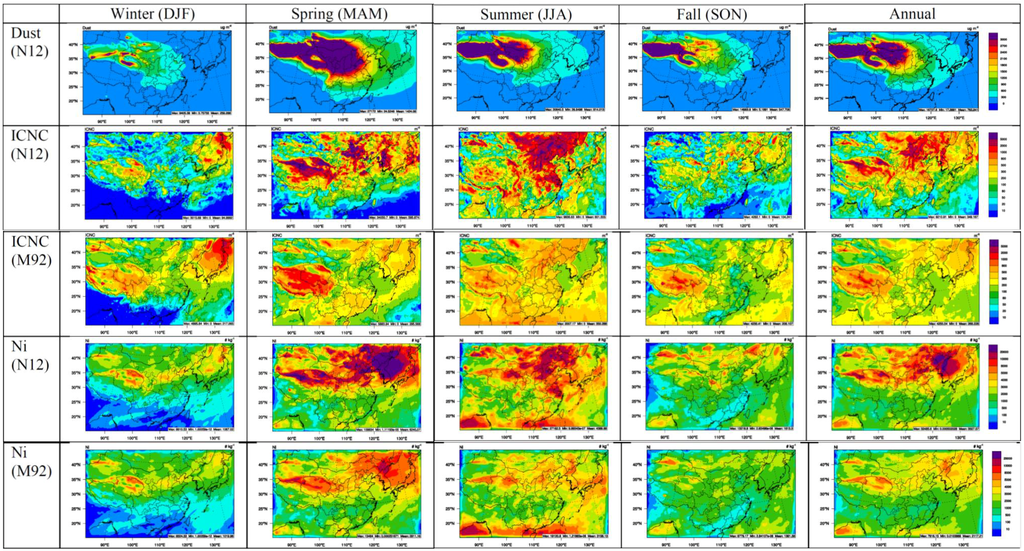