Medicinal Properties of Lilium candidum L. and Its Phytochemicals
Previous Article in Journal

Zanthoxylum paracanthum Kokwaro (Rutaceae) is an endemic Kenyan and Tanzanian plant used in folk medicine by local populations. Although other Zanthoxylum species have been studied, only Z. paracantum stem extracts have been profiled, even though the roots are also used as herbal remedies. As root extracts may be another source of pharmaceutical compounds, the CH2Cl2/MeOH (1:1) root bark extract was studied in this report. Eight root bark compounds were isolated and their structural identities were confirmed by mass spectrometry (MS) and nuclear magnetic resonance (NMR) (using COSY, HSQC, NOESY and HMBC) analyses. The structural identities were determined as follows: the fatty acid—myristic acid (1); the sterol—stigmasterol (2); the lignan—sesamin (3); two β-carboline alkaloids—10-methoxycanthin-6-one (6) and canthin-6-one (7); and three phenanthridine alkaloids—8-acetonyldihydrochelerythrine (4), arnottianamide (5) and 8-oxochelerythrine (8). Some of these compounds were identified in the species for the first time. These compounds and the extract were then tested in vitro against methicillin-resistant Staphylococcus aureus (MRSA), Escherichia coli (ATCC 25922), Staphylococcus aureus (ATCC 29213) and Candida albicans (ATCC 10231) before tests for antiproliferative activity against the human breast cancer (HCC 1395), human prostate cancer (DU 145) and normal (Vero E6) cell lines were conducted. Minimum inhibition concentration values of 3.91, 1.95, 0.98 and 7.81 µg/mL against MRSA, S. aureus, E. coli and C. albicans, respectively, were recorded. Among the isolates, canthin-6-one was the most active, followed by 10-methoxycanthin-6-one. The root extract and some of the compounds also had antiproliferative activity against the HCC 1395 cell line. Stigmasterol and canthin-6-one had IC50 values of 7.2 and 0.42. The root bark extract also showed activity, at 8.12 µg/mL, against the HCC 1395 cells. Out of the chemical isolates, 10-methoxycanthin-6-one and canthin-6-one showed the strongest inhibition of the DU 145 cells. The root extract had significant antimicrobial and antiproliferative activities, supporting the traditional use of this plant in treating microbial infections and cancer-related ailments. View Full-Text
Keywords: alkaloids; antimicrobial activity; anticancer activity; canthinones; medicinal plant; phytochemistry; traditional medicine alkaloids; antimicrobial activity; anticancer activity; canthinones; medicinal plant; phytochemistry; traditional medicine
►▼ Show Figures 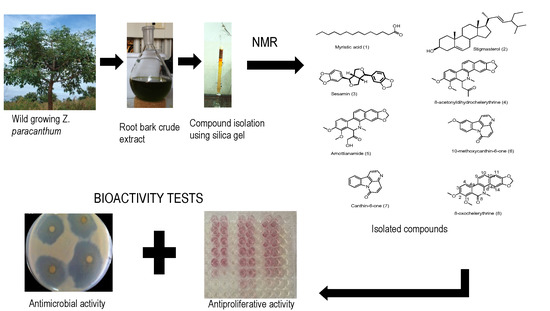