Genebank Phenomics: A Strategic Approach to Enhance Value and Utilization of Crop Germplasm

Potato wild relatives provide a considerable source of variation for important traits in cultivated potato (Solanum tuberosum L.) breeding. This study evaluates the variation of tuber starch content and nitrogen utilization efficiency (NutE) in wild potato germplasm. For the experiments regarding starch content, 28 accessions of ten different tuber-bearing wild Solanum-species were chosen, and in vitro plantlets were raised from seeds. Twenty plantlets (= genotypes) per accession were then cultivated in the greenhouse until natural senescence and tuber starch content was determined. The average tuber starch content across all genotypes tested was 21.7% of fresh mass. Contents above 28% of fresh mass were found in 50 genotypes, belonging to the species S. chacoense, S. commersonii, S. jamesii, and S. pinnatisectum. Subsequently, 22 wild genotypes revealing high tuber starch contents and four modern varieties of cultivated potato were studied as in vitro plantlets under optimal and low N supply (30 and 7.5 mmol L−1 N). Low N supply lead to a genotype-dependent reduction of shoot dry mass between 13 and 46%. The majority of the wild types also reduced root dry mass by 26 to 62%, while others maintained root growth and even exceeded the NutE of the varieties under low N supply. Thus, wild potato germplasm appears superior to cultivars in terms of tuber starch contents and N utilization efficiency, which should be investigated in further studies. View Full-Text
Keywords: genetic resources; Solanum chacoense; stress tolerance genetic resources; Solanum chacoense; stress tolerance
►▼ Show Figures 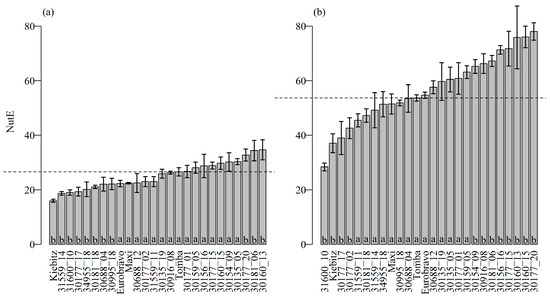