Trichoderma: The “Secrets” of a Multitalented Biocontrol Agent
Previous Article in Journal

More than Scales: Evidence for the Production and Exudation of Mucilage by the Peltate Trichomes of Tillandsia cyanea (Bromeliaceae: Tillandsioideae)

Bromeliad scales have been investigated extensively due to their recognition as a key ecological and evolutionary feature of Bromeliaceae. However, much remains unknown about such trichomes and only recently mucilage exudation was described for them in a species of the subfamily Bromelioideae. The present study aimed to investigate the secretion present in inflorescences of Tillandsia cyanea Linden ex K. Koch (Tillandsioideae) to determine whether the scales of this species also produce and release secretions. Samples of young and mature portions of inflorescences were collected and prepared according to standard methods for light and electron microscopy. Anatomical and ultrastructural results indicate that the secretion is produced by the wing portion of typical peltate trichomes on the adaxial surface of bracts. The secretory activity begins in the early stages of trichome expansion and characteristically occurs in cells exhibiting a porous cuticle and dense cytoplasm with numerous mitochondria and dictyosomes. Histochemical tests confirmed mucilage secretion and revealed proteins in the exudate. These data comprise the first record of mucilage exudation by trichomes within Tillandsioideae and indicate that this capacity may be more relevant to bromeliad biology than previously considered. Functional aspects and colleter-like activity are also discussed. View Full-Text
Keywords: scales; colleter; plant–environment interactions; plant secretion; gland; cuticular pores; desiccation; absorbing trichomes; herbivory scales; colleter; plant–environment interactions; plant secretion; gland; cuticular pores; desiccation; absorbing trichomes; herbivory
►▼ Show Figures 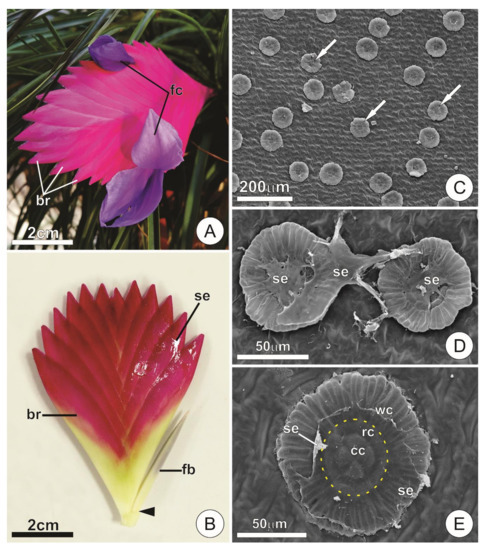 Ballego-Campos, I.; Forzza, R.C.; Paiva, E.A.S. More than Scales: Evidence for the Production and Exudation of Mucilage by the Peltate Trichomes of Tillandsia cyanea (Bromeliaceae: Tillandsioideae). Plants 2020, 9, 763.


Ballego-Campos I, Forzza RC, Paiva EAS. More than Scales: Evidence for the Production and Exudation of Mucilage by the Peltate Trichomes of Tillandsia cyanea (Bromeliaceae: Tillandsioideae). Plants. 2020; 9(6):763.


Ballego-Campos, Igor; Forzza, Rafaela C.; Paiva, Elder A.S. 2020. "More than Scales: Evidence for the Production and Exudation of Mucilage by the Peltate Trichomes of Tillandsia cyanea (Bromeliaceae: Tillandsioideae)." Plants 9, no. 6: 763.