Predicting seed germination in the field is a critical part of anticipating the impact of climate change on the timing of wild species regeneration. We combined thermal time and soil heat sum models of seed germination for three endemic Mediterranean mountain species with endospermic seeds and morphophysiological dormancy: Aquilegia barbaricina, Paeonia corsica, and Ribes sandalioticum. Seeds were buried in the soil within the respective collection sites, both underneath and outside the tree canopy, and their growth was assessed regularly and related to soil temperatures and estimates of the thermal characteristics of the seeds. The thermal thresholds for embryo growth and seed germination of A. barbaricina assessed in previous studies under controlled conditions were used to calculate soil heat sum accumulation of this species in the field. Thermal thresholds of seed germination for P. corsica and R. sandalioticum were not previously known and were estimated for the first time in this field study, based on findings of previous works carried out under controlled conditions. Critical embryo length and maximum germination for A. barbaricina were reached in April, and in December for R. sandalioticum. Seeds of P. corsica stay dormant in the ground until the following summer, and the critical embryo length and highest germination were detected from September to December. Soil heat sum models predicted earlier germination by one month for all three species under two Intergovernmental Panel on Climate Change (IPCC) scenarios, based on the assumption that the estimated thermal thresholds will remain constant through climate changes. This phenological shift may increase the risk of mortality for young seedlings. The models developed provide important means of connecting the micro-environmental niche for in situ seed germination and the macro-environmental parameters under a global warming scenario. View Full-Text
Keywords: embryo growth; global warming; Grossulariaceae; IPCC scenarios; morphophysiological dormancy; Paeoniaceae; phenology; Ranunculaceae; soil temperature; tree canopy embryo growth; global warming; Grossulariaceae; IPCC scenarios; morphophysiological dormancy; Paeoniaceae; phenology; Ranunculaceae; soil temperature; tree canopy
►▼ Show Figures 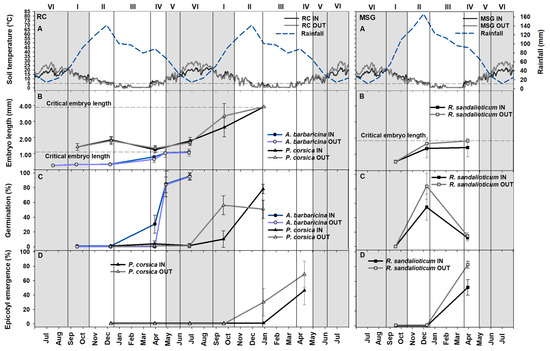