:
The efficient regeneration of plants from commercial genotypes is a pre-requisite for successful genetic transformation, to apply modern crop improvement techniques such as CRISPR-based genome editing. Plant regeneration through the somatic embryogenesis pathway offers an advantage over the organogenesis approach, avoiding the risk of developing chimeras. Plant genotype, explant type, and media compositions play an essential role in the in-vitro regeneration of plants. This study aimed to characterize the commercially grown Australian soybean genotypes for their potential to induce somatic embryos, embryo proliferation, maturation, germination, and plant regeneration. Overall, nine soybean cultivars belonging to different maturity groups were evaluated. Immature cotyledon ranging from 2–4 and 4–6 mm in size were used as explants for somatic embryogenesis induction. Maximum somatic embryo induction frequency (86%) was observed from 4–6 mm immature cotyledons of the cv. Jack (MG III), followed by 66%, 26%, 21%, and 6% in cultivars Williams (MG III), Snowy (MG III), MoonB1 (MG V), and PNR791 (MG V), respectively. On the other hand, cv. Snowy showed maximum somatic-embryo-inducing potential (67%) in 2–4 mm immature cotyledons followed by Williams, Jack, MoonB1, and PNR791. Somatic embryos from Jack, Williams, and Snowy cultivars were further tested for embryo proliferation, maturation, and germination. Maximum proliferation and maturation were observed in cv. Jack, followed by Snowy and Williams. However, cv. Snowy showed a significantly higher conversion of cotyledonary stage embryos to plantlets (85%), than both Jack and Williams cultivars (53% each). In conclusion, this study outlined a protocol for somatic embryogenesis and plant regeneration from three soybean cultivars. Our findings suggest commercial cv. Snowy could be a good candidate for developing transgenic plants through somatic embryogenesis.
Keywords:
legume; soybean cv. Snowy; tissue culture

Soybean (Glycine max L.) is an important agricultural crop. It ranks 7th in terms of revenue, with an income of ~121 billion US dollars in the year 2016 [1]. Soybean seeds are rich in protein, oil, and unsaturated fatty acids. Further, soybean is also a good source of minerals, B vitamins, and isoflavones. Soybean is also extensively used in animal feed as well as in other industrial applications [2,3,4]. Fertile soybean plants have been regenerated in vitro, mainly through organogenesis [5,6]. There is a high risk of obtaining chimeric plants through organogenesis, during genetic transformation. On the other hand, plant regenerated via somatic embryogenesis arises from a single cell, avoiding the complexities of chimeras. Therefore, the development of transgenic soybean plants through somatic embryogenesis has been proposed as a reliable method for recovering stable transgenic lines [7,8]. A number of studies on in vitro regeneration collectively indicated that the initiation of the somatic embryos from explants and plant regeneration depends on the genotypes or cultivar [9,10,11,12,13,14,15]. Similar to other important crop species, the efficiency of plant regeneration in soybean is highly genotype-dependent, and efficient regeneration has only been reported from Jack, a cultivar of inferior agronomical value [11,16,17,18]. A number of studies have explored the regeneration potential of different commercially grown soybean cultivars [6,13,14,19,20,21,22], and the embryogenic genotypes found belonged to MG 00-III maturity groups. These cultivars are primarily adapted to the climatic conditions of Canada, the USA, and Brazil [9,19,23,24,25].
In Australia, soybean was adopted as a commercial crop in the early 1950s. Currently, soybean is commercially grown in Queensland, New South Wales (NSW), Northern Victoria, and Western Australia. Cultivars such as Snowy, Bunya, A6785, Fernside, Warrigul, Mooni, and Jabiru are favored for cultivation. Snowy is the first cultivar adapted in the Riverina region of NSW because of its good yield and seed quality. The Snowy crop matures early, a trait that helps to avoid frosts in Victoria. Moreover, Snowy, with a high protein content of above 40%, is used for tofu and soymilk production, providing farmers about $200/ton premium compared to other soybean cultivars that are used for oil extraction. Bunya is a quick maturity cultivar, while A6785 belongs to the medium maturity group. Both Bunya and A6785 are grown in Queensland and are resistant to the two main races of Phytophthora root rot found in this state. Bunya is suitable for the manufacturing of tofu, and the A6785 variety is chosen for soy flour and soymilk. A6785 is also recommended in an area where crops are susceptible to weather damage around harvesting time. Although the A6785 cultivar has marginally lower protein amounts, its cultivation at the right time results in high seed yields. Bunya produces large-sized seeds that are susceptible to damage during harvesting. Fernside, with an excellent grain size, is a medium maturing variety and has replaced the A6785 cultivar in the edible market. Moonbi cultivar is a fast-maturing type and is recommended for cultivation in NSW regions. It has high a protein content and better weather tolerance [6,26,27].
Photoperiod and temperature play a critical role in determining the soybean phenology, adaptation, and yield [28,29]. Hence, soybean varieties are adapted in restricted regions of Australia, limiting the availability of the suitable soybean cultivars in potential growing regions. Therefore, there is a need to breed soybean cultivars with a wide range of adaptability with improved quality and agronomic traits.
We aim to extend the genetic transformation technology for commercial soybean varieties for the application of the CRISPR-based genome editing technology. Identification of the most suitable commercial variety, which might be regenerated through somatic embryogenesis, is the first step, as plant regeneration is highly genotype-dependent and to-date only a model cv. Jack has been shown to amenable to in vitro regeneration. In the present study, we found that commercial cultivar Snowy has a better regeneration potential through somatic embryogenesis than the Jack model variety. This study provides the first report on regeneration of an Australian commercial cultivar via somatic embryogenesis. Hence, the Snowy cultivar could be used for functional genomics studies using the newly developed CRISPR technology.

Seven commercial (Bunya, Fernside, Snowy, A6786, PNR791, Bragg) and two model cultivars (Jack, Williams) of soybean (Glycine max L. Merr.) were used for somatic embryogenesis and plant regeneration. Seeds of Bunya, Fernside, Snowy, A6786, and PNR791 cultivars were obtained from Maralong (Pvt.) Ltd. PB-Agrifood, Brisbane, Australia. The seeds were sown in pots containing a seed raising mix. The pots were placed in a controlled growth cabinet at 25 ± 2 °C with a 14 h photoperiod and light intensity of 600–1500 moles/m2/s. The photoperiod was reduced to 10 h after one month, to induce flowering. After 2–3 weeks of flower induction, healthy pods from each cultivar were collected and sterilized by washing with sterile ddH2O containing few drops of Tween-20 for five minutes, followed by disinfection with 10% commercial bleach solution (8%–12 % chlorine) for 20 min, and was rinsed with sterile ddH2O five times, to remove the excess sodium hypochlorite [14]. The immature cotyledons were retrieved and the embryo axes were removed, following the method described by Lazzari et al. [37]. The sizes of cotyledon explants were categorized into two groups: 2–4 mm and 4–6 mm. The explants were placed with the abaxial side facing down on the D40 medium containing MS salts [38], B5 vitamins [39], 100 mg L−1 myo-inositol (I3011; Sigma-Aldrich), 30 g L−1 sucrose, 40 mg L−1 2,4-D (D8407; Sigma-Aldrich), 2 g L−1 Gelrite (G1910; Sigma-Aldrich), and pH 7.0. The plates were incubated at 25–27 °C, with 25–40 µmol m−2 S−1 light on a 16/8 h light/dark cycle. After 45 days in a D40 medium, somatic embryo induction from each explant was noted, and each cotyledon was visually scored [5,10]. The induced somatic embryos were dissected and further cultured on the D20 medium comprising MS salts, B5 vitamins, 100 mg L−1 myo-inositol, 30 g L−1 sucrose, 660.6 mg L−1 asparagine (A4159; Sigma-Aldrich), 20 mg L−1 2,4-D, 2 g L−1 Gelrite, and pH 5.7. Sub-culturing on a fresh D20 medium occurred every two weeks. After six weeks, somatic embryo clumps were counted and further cultured on the M6AC medium, as described by Finer [5]. After 30 days, matured embryos were counted and sub-cultured on the M6AC medium again, until the embryos turned to a cream color. Then, the embryos were desiccated for three days by placing the 15 embryos in an empty Petri plate wrapped with parafilm. The desiccated embryos were further cultured on an embryos germination medium [MS salts, B5 vitamins, 100 mg L−1 myo-inositol, 30 g L−1 sucrose, 2 g L−1 Gelrite, and pH 5.8]. After six weeks, the percentage of germinated embryos converted into complete plants was calculated. The rooted plants were cultured in sterile plastic jars for further growth. Fully regenerated soybean plants were transferred to pots containing commercially available potting mix, under glasshouse conditions.

The experiments were done using a completely randomized design with three replicates. All data of somatic embryos induction, proliferation, and germination were analyzed by one-way analysis of variance followed by a Fisher’s protected LSD test and was considered significant at p < 0.05. The analysis was carried out using the statistical software Genstat, 15th Edition [40].

This research was funded by the Australian Research Council, grant numbers CE0348212 and DP0988972.

We thank the Australian Research Council for the financial support in the form of the ARC Centre of Excellence for Integrative Legume Research (CE0348212) and ARC Discovery Grant ARC DP0988972. 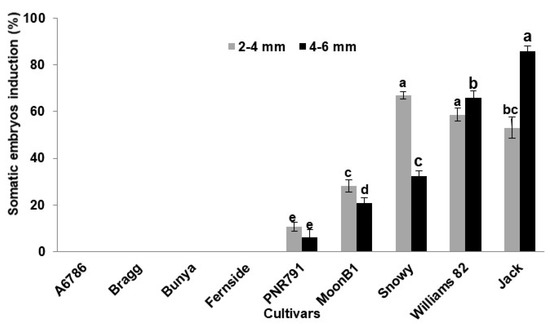 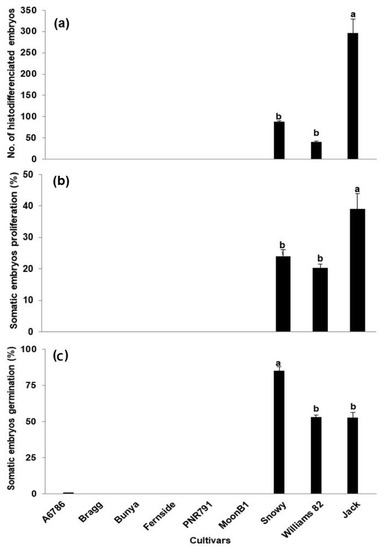