Patterning the Axes: A Lesson from the Root
Next Article in Special Issue

Organogenesis at the Shoot Apical Meristem

Trials were performed to test the germination ecology of buried weed seeds as a function of physical soil conditions such as of burial depth, texture, and compaction. Indeed, these ecological conditions, due to the adopted agronomic practices, play a crucial role in modulating the seed bank germination dynamics. Experiments were carried out in open fields in confined soils (polypropylene pipes), and in the laboratory in Petri dishes. Sowing depth strongly inhibited the seed germination of the three weed species selected. This inhibition was found to be inversely proportional to the size of the soil particles. Compaction strongly increased the depth-mediated inhibition, especially in soils that were rich in clay particles, and was inversely proportional to the seed size. The physiological nature of the dormancy imposed by burial was investigated. In addition, ungerminated seeds, re-exhumed after deep-sowing for six months, were found to be in deep dormancy, especially after burial in compacted clay soil. This dormancy induction was more pronounced in weed species characterized by small seeds. Critical issues are discussed regarding weed seed bank ecophysiology and their management in sustainable agricultural cropping systems. View Full-Text
Keywords: soil texture; seed bank germination; soil compaction; seeding depth soil texture; seed bank germination; soil compaction; seeding depth
►▼ Show Figures 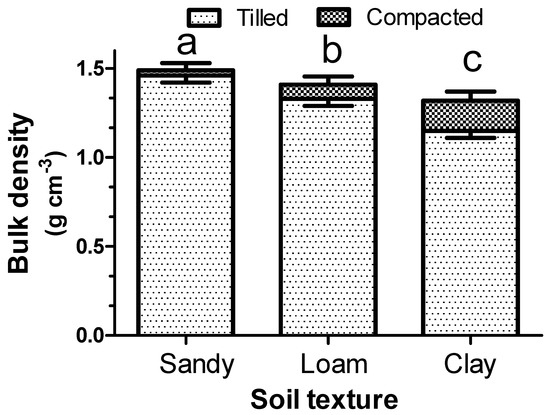