Drawing a Line: Grasses and Boundaries
Previous Article in Journal

Successful acclimatization and ex vitro rooting are among the key factors reducing the cost of micropropagated plants. We compared the survival of seven Russian cultivars of raspberry (Rubus idaeus) after rooting in vitro and ex vitro. Rooted shoots adapted to nonsterile conditions much better than nonrooted ones, with survival rates of 81%–98% versus 43%–76%, respectively. We studied the effects of different combinations of plant-growth regulators and gelling agents added to a proliferation medium on ex vitro rooting of primocane-fruiting raspberry cultivar “Atlant”. Reducing the agar concentration from 8 to 6.5 g/L increased the multiplication rate, but caused shoot hyperhydricity. The highest survival rate (97.2%) was observed for shoots grown in a medium containing 0.2 and 0.1 mg/L IBA, and gelled with 5 g/L agar and 0.2 g/L Phytagel. The microshoot height at the multiplication stage did not correlate with the plant growth during acclimatization. The obtained results can be used in the commercial micropropagation of the raspberry. View Full-Text
Keywords: Rubus idaeus; acclimatization; ex vitro rooting; plant-growth regulators; Phytagel Rubus idaeus; acclimatization; ex vitro rooting; plant-growth regulators; Phytagel
►▼ Show Figures 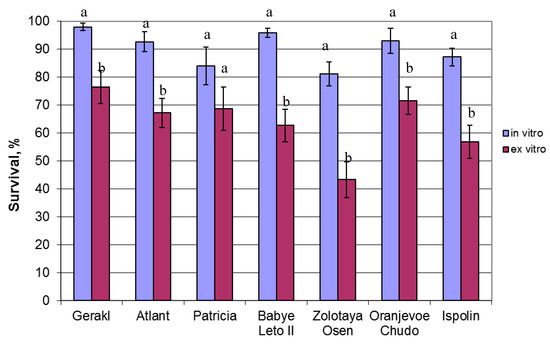