Although wheat is a staple food for most of the human population, some of its components trigger adverse reactions. Among wheat components, the alpha-amylase/trypsin inhibitors (ATI) are important triggers of several allergies and activators of innate immunity. ATI are a group of exogenous protease inhibitors and include several polypeptides. The three ATI polypeptides named CM3, CM16 and 0.28 are considered major allergens, and might also play a role in other common wheat-related pathologies, such as Non Celiac Wheat Sensitivity and even Celiac Disease. On this basis, we pointed to obtain high amounts of them in purity and to evaluate their allergenicity potential. We thus isolated the mRNA corresponding to the three ATI genes CM3, CM16 and 0.28 from 28 days post-anthesis wheat kernels and the corresponding cDNAs were used for heterologous expression in Pichia pastoris. The three purified proteins were tested in degranulation assay against human sera of patients with food allergy to wheat. A large range of degranulation values was observed for each protein according to the sera tested. All of the three purified proteins CM3, CM16 and 0.28 were active as allergens because they were able to induce basophils degranulation on wheat allergic patients’ sera, with the highest values of β-hexosaminidase release observed for CM3 protein. View Full-Text
Keywords: wheat; alpha-amylase/trypsin inhibitor; heterologous expression; Pichia pastoris; allergy wheat; alpha-amylase/trypsin inhibitor; heterologous expression; Pichia pastoris; allergy
►▼ Show Figures 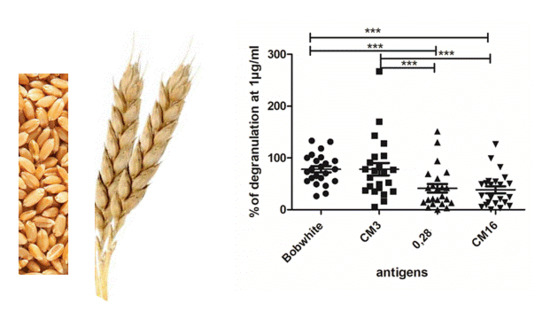