Review of the Biology, Distribution, and Management of the Invasive Fireweed (Senecio madagascariensis Poir)

1
School of Agriculture and Food Science, Faculty of Science, University of Queensland, Gatton 4343, Australia
2
Department of Agriculture and Fisheries, Brisbane 40000, Australia
3
Centre for Carbon, Water and Food, School of Life and Environmental Sciences, The University of Sydney, Camden 2006, Australia
*
Author to whom correspondence should be addressed.
Academic Editors: Barbara Sladonja and Danijela Poljuha
Plants 2022, 11(1), 107; https://doi.org/10.3390/plants11010107
Received: 1 December 2021 / Revised: 22 December 2021 / Accepted: 24 December 2021 / Published: 30 December 2021
(This article belongs to the Collection The Use and Management of Invasive Plants)

Whilst exotic invasive species are a major threat to natural and modified ecosystems around the world, management programs to reduce their impacts often fail due to a lack of information about their biology and how best to control them in various situations. This paper reviews the currently available information on the biology, distribution, and management options for the invasive weed Senecio madagascariensis Poir. (fireweed). In addition, we developed a model to predict the climatic suitability of this weed around the world based on the current climate. Senecio madagascariensis originates from southern Africa but it has been introduced to several other countries including Australia. Climatic suitability suggests that there are large areas around the world suitable for the weed’s growth where it is currently not present. The weed poses a major threat to livestock industries in these countries through its ability to reduce pasture production and poison animals. A range of control techniques have been used to try and manage S. madagascariensis. This paper highlights how a better understanding of the biology of S. madagascariensis can help determine the most effective treatments to impose and to further develop integrated management strategies. Besides using traditional approaches, the use of competitive pastures and more tolerant livestock (such as sheep and goats) are some of the other options recommended as part of an integrated approach. On-going research to identify host-specific biological control agents is also considered a priority. View Full-Text
Keywords: CLIMEX; ecology; herbicides; impact; integrated control; pasture management CLIMEX; ecology; herbicides; impact; integrated control; pasture management
►▼ Show Figures 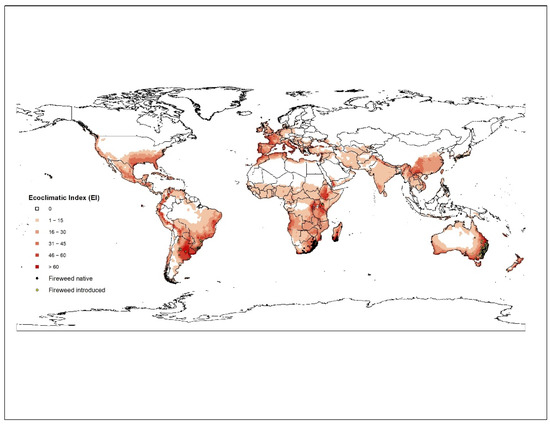