Agro-Alimentary Potential of the Neglected and Underutilized Local Endemic Plants of Crete (Greece), Rif-Mediterranean Coast of Morocco and Tunisia: Perspectives and Challenges

Stem and Leaf Anatomy of Aragoa (Plantaginaceae): In Search of Lost Rays

Aragoa is a shrubby genus endemic to páramo in the northern Andes representing the sister group to Plantago and Limosella. Stem and leaf structure of Aragoa corrugatifolia were studied to clarify the evolutionary pathways and ecological significance of their anatomical traits. Aragoa and Plantago share a non-fascicular primary vascular system, rayless wood and secondary phloem, and anomocytic stomata. Aragoa is distinctive from most Plantaginaceae in the presence of cortical aerenchyma and of helical thickenings in vessels. Its procambium emerges in the primary meristem ring as a continuous cylinder. The view on the ring meristem and procambial strands as developmental stages in the formation of a primary vascular system is not relevant for Aragoa, and probably for other Plantaginaceae. The raylessness is synapomorphic for the crown clade of Plantaginaceae comprising Aragoa, Littorella, Plantago, Veronica, Picrorhiza, Wulfenia, and Veronicastrum. The loss of rays is thought to be predetermined by procambium rather than by the vascular cambium. The extremely narrow vessels with helical thickenings are presumably adaptive to hydric and thermic conditions of páramo. Cortical aerenchyma is thought to be a response to the local hypoxia caused by the water retained by ericoid leaves. Trichomes on juvenile leaves are expected to be the traits of considerable taxonomic importance. View Full-Text
Keywords: rayless wood; secondary phloem; stomata; trichomes; procambium; aerenchyma; páramo; Plantago rayless wood; secondary phloem; stomata; trichomes; procambium; aerenchyma; páramo; Plantago
►▼ Show Figures 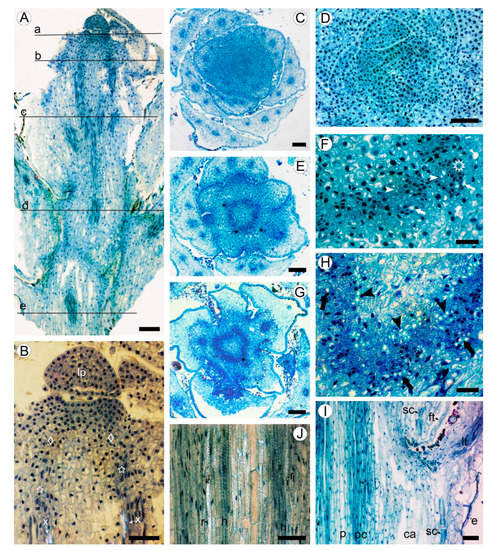