Intraspecific Variation in Nickel Tolerance and Hyperaccumulation among Serpentine and Limestone Populations of Odontarrhena serpyllifolia (Brassicaceae: Alysseae) from the Iberian Peninsula

The elemental defense hypothesis supports that metal hyperaccumulation in plant tissues serves as a mechanism underpinning plant resistance to herbivores and pathogens. In this study, we investigate the interaction between Odontarrhena lesbiaca and broomrape parasitic species, in the light of the defense hypothesis of metal hyperaccumulation. Plant and soil samples collected from three serpentine sites in Lesbos, Greece were analyzed for Ni concentrations. Phelipanche nowackiana and Phelipanche nana were found to infect O. lesbiaca. In both species, Ni concentration decreased gradually from tubercles to shoots and flowers. Specimens of both species with shoot nickel concentrations above 1000 mg.kg−1 were found, showing that they act as nickel hyperaccumulators. Low values of parasite to O. lesbiaca leaf or soil nickel quotients were observed. Orobanche pubescens growing on a serpentine habitat but not in association with O. lesbiaca had very low Ni concentrations in its tissues analogous to excluder plants growing on serpentine soils. Infected O. lesbiaca individuals showed lower leaf nickel concentrations relative to the non-infected ones. Elevated leaf nickel concentration of O. lesbiaca individuals did not prevent parasitic plants to attack them and to hyperaccumulate metals to their tissues, contrary to predictions of the elemental defense hypothesis. View Full-Text
Keywords: Alyssum lesbiacum; biotic interaction; metallophytes; Phelipanche nana; Phelipanche nowackiana; plant parasites; serpentine soils; ultramafic Alyssum lesbiacum; biotic interaction; metallophytes; Phelipanche nana; Phelipanche nowackiana; plant parasites; serpentine soils; ultramafic
►▼ Show Figures 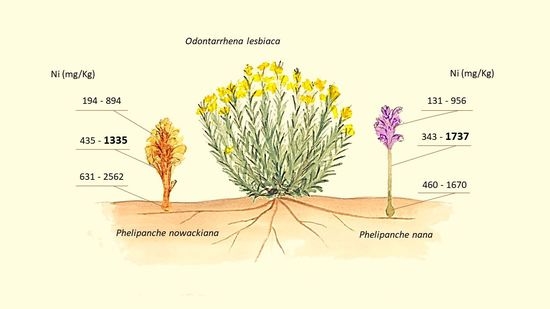