Next Chapter in the Legend of Silphion: Preliminary Morphological, Chemical, Biological and Pharmacological Evaluations, Initial Conservation Studies, and Reassessment of the Regional Extinction Event

Silphion was an ancient medicinal gum-resin; most likely obtained from a Ferula species growing in the Cyrene region of Libya ca. 2500 years ago. Due to its therapeutic properties and culinary value, silphion became the main economic commodity of the Cyrene region. It is generally believed that the source of silphion became extinct in the first century AD. However, there are a few references in the literature about the cultivated silphion plant and its existence up to the fifth century. Recently, a rare and endemic Ferula species that produces a pleasant-smelling gum-resin was found in three locations near formerly Greek villages in Anatolia. Morphologic features of this species closely resemble silphion, as it appears in the numismatic figures of antique Cyrenaic coins, and conform to descriptions by ancient authors. Initial chemical and pharmacological investigations of this species have confirmed the medicinal and spice-like quality of its gum-resin supporting a connection with the long-lost silphion. A preliminary conservation study has been initiated at the growth site of this rare endemic Ferula species. The results of this study and their implications on the regional extinction event, and future development of this species will be discussed. View Full-Text
Keywords: silphion; Ferula; F. drudeana; medicinal oleo-gum-resin; chemistry and pharmacology; extinction; conservation silphion; Ferula; F. drudeana; medicinal oleo-gum-resin; chemistry and pharmacology; extinction; conservation
►▼ Show Figures 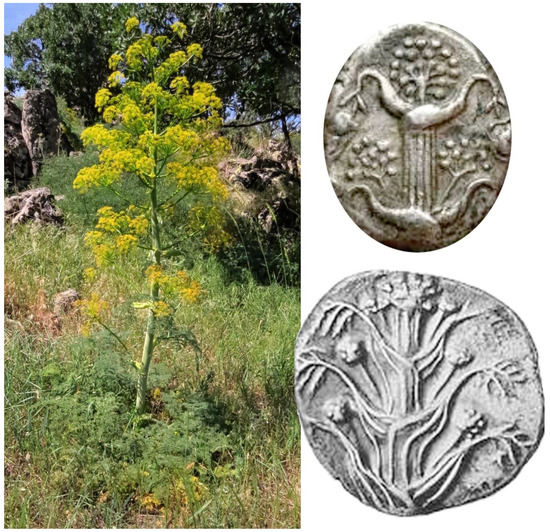 
Miski, Mahmut. 2021. "Next Chapter in the Legend of Silphion: Preliminary Morphological, Chemical, Biological and Pharmacological Evaluations, Initial Conservation Studies, and Reassessment of the Regional Extinction Event" Plants 10, no. 1: 102.