Hedgehog: A Key Signaling in the Development of the Oligodendrocyte Lineage

:
Neural progenitors in the embryonic neocortex must be tightly regulated in order to generate the correct number and projection neuron subtypes necessary for the formation of functional neocortical circuits. In this study, we show that the intracellular protein Suppressor of Fused (Sufu) regulates the proliferation of intermediate progenitor (IP) cells at later stages of corticogenesis to affect the number of Cux1+ upper layer neurons in the postnatal neocortex. This correlates with abnormal levels of the repressor form of Gli3 (Gli3R) and the ectopic expression of Patched 1 (Ptch1), a Sonic Hedgehog (Shh) target gene. These studies reveal that the canonical role of Sufu as an inhibitor of Shh signaling is conserved at later stages of corticogenesis and that Sufu plays a crucial role in regulating neuronal number by controlling the cell cycle dynamics of IP cells in the embryonic neocortex.
Keywords:
Suppressor of Fused; Sonic Hedgehog; Gli3; corticogenesis; neurogenesis

Mice carrying the floxed Sufu allele (Sufufl) were kindly provided by Dr. Chi-Chung Hui (University of Toronto, Toronto, ON, Canada) and were genotyped as described [16]. The hGFAP-Cre (Stock #004600) was obtained from Jackson Laboratories (Bar Harbor, ME, USA). All animal protocols were in accordance with the regulations of the National Institute of Health and approved by the University of California San Francisco Institutional Animal Care and Use Committee (IACUC).

All experiments were conducted in triplicate with a sample size of n = 3−6 embryos/animals per genotype. For pairwise analysis of control and mutant genotypes, the Student t-test was used. Graphs display the mean ± standard error of the mean (SEM).

3.1. Expansion of the VZ and SVZ in the E16.5 Neocortex of hGFAPcre/+;Sufufl/fl Mice

3.2. Abnormal Proliferation of Cortical Progenitors in the E16.5 Neocortex of hGFAPcre/+;Sufufl/fl Mice

At E16.5, the VZ and SVZ are composed of RG and IP cells, respectively [21]. The embryonic neocortex has accumulated a larger population of IPs at this stage as a result of RG cell expansion at earlier stages of corticogenesis. IP cells will undergo one or more cell divisions prior to differentiating into projection neurons that will eventually populate the upper cortical layers [2,4]. To determine whether the expansion of VZ/SVZ in the E16.5 hGFAPcre/+;Sufufl/fl neocortex was due to deregulated proliferation of cortical progenitors, we conducted BrdU treatments to label proliferating cells. Examination of BrdU-treated embryos 4 h after treatment showed a visible increase in BrdU-labeled cells in the SVZ of the E16.5 hGFAPcre/+;Sufufl/fl neocortex compared to control (Figure 2A,B). Quantification of BrdU-labeled cells verified these observations in which a significantly higher density of BrdU+ cells was evident in the SVZ of the E16.5 neocortex of hGFAPcre/+;Sufufl/fl mice, while a slight reduction in BrdU+ cells was observed in the VZ when compared to controls (Figure 2C). These findings indicated that a larger proportion of progenitors were actively dividing in this period in the hGFAPcre/+;Sufufl/fl neocortical SVZ.

3.3. Increase in Basally Dividing Progenitors in the E16.5 hGFAPcre/+;Sufufl/fl Neocortex

RGs are typically undergoing asymmetric cell division in the apical lining of the VZ, while IPs are undergoing symmetric division in the basal SVZ regions, prior to differentiating into upper layer projection neurons mid-corticogenesis [2]. The increase in density of BrdU+ cells in the SVZ of hGFAPcre/+;Sufufl/fl mice (Figure 2B) indicates a potential increase in basally dividing progenitors. However, because BrdU is incorporated during the S-phase of the cell cycle along the VZ/SVZ, including RGs that may be undergoing interkinetic nuclear migration [1], BrdU-labeled cells in the SVZ may not be exclusively IPs. We therefore conducted immunofluorescence staining against the mitosis marker, Phospho-Histone H3, to distinguish between RGs undergoing mitosis in the apical lining of the VZ, and IPs that undergo mitosis in the basal or SVZ regions of the neocortical progenitor zone. These experiments showed a dramatic increase in basally dividing cells in the E16.5 hGFAPcre/+;Sufufl/fl neocortex (boxed inset, Figure 3A). Indeed, we quantified a significant increase in basally dividing progenitors in the E16.5 hGFAPcre/+;Sufufl/fl neocortex but not in apically dividing cells (Figure 3B). These findings indicated that loss of Sufu promoted the mitotic division of progenitors within the SVZ.
To determine the identity of proliferating cells in the VZ/SVZ, we conducted double immunofluorescence staining with antibodies against BrdU and Pax6, a marker for both apical RG cells and basal RG cells (those that localize in the SVZ), or Tbr2, a specific marker for IPs [4]. As expected, we found an increase in BrdU-labeled Tbr2+ cells in the VZ/SVZ of the E16.5 hGFAPcre/+;Sufufl/fl neocortex (Figure 4D,F). Surprisingly, we also found an increase in BrdU-labeled Pax6+ cells (Figure 4C), particularly those that localized in the SVZ (boxed areas in Figure 4A). Despite this, we did not observe any changes in the density of Pax6+ RG cells or Tbr2+ IP cells in the VZ/SVZ regions (Figure 4B,E). Since we observed an expansion of Tbr2+ regions (Figure 1F,G), an increase in basally dividing cells (Figure 3), and that Pax6 expression is typically found in newly generated IP cells [21], our findings suggested that loss of Sufu not only promoted the proliferation of basally dividing progenitors, but also likely triggered the transition of Pax6+ RG cells into Tbr2+ IP cells, in the E16.5 neocortex.

3.5. Activation of Shh Signaling in the E16.5 hGFAPcre/+;Sufufl/fl Neocortex

3.6. Increase in Cell Death in the E16.5 hGFAPcre/+;Sufufl/fl Neocortex

We previously observed that loss of Sufu at early stages of corticogenesis resulted in cortical progenitors or neurons that were unable to survive [6]. Given that there is a significant increase in IP cells in the E16.5 hGFAPcre/+;Sufufl/fl neocortex, we examined whether these progenitors and their progenies were able to survive in the developing neocortex. By immunolabeling with the cell death marker, cleaved-Caspase 3, we found that there was a dramatic increase in apoptotic cells in the dorsolateral neocortex of the E16.5 hGFAPcre/+;Sufufl/fl mice (within dashed lines, Figure 7A) compared to controls, particularly in the VZ/SVZ regions (Figure 7B). Quantification of cleaved-Caspase 3+ cells confirmed these observations, in which a significantly higher number of apoptotic cells were found in the dorsolateral neocortex of the E16.5 hGFAPcre/+;Sufufl/fl mice compared to controls (Figure 7C). These findings indicated that the deletion of Sufu in cortical progenitors affected its ability to survive during corticogenesis.

3.7. Increase in the Number of Cux1+ Upper Layer Neurons in the P7 hGFAPcre/+;Sufufl/fl Neocortex

3.8. Normal Formation of Callosal Projections in the P15 hGFAPcre/+;Sufufl/fl Neocortex

Cux1+ projection neurons of the upper layers of the neocortex form callosal projections, which interconnect the two cortical hemispheres via the corpus callosum [23]. To examine whether callosal projections were affected in the hGFAPcre/+;Sufufl/fl neocortex as a consequence of the increase in Cux1+ cells, we embedded DiI crystals in the upper cortical layers of the P15 control and mutant mice to anterogradely label axons crossing the midline along the corpus callosum. As with the controls, we found that DiI-labeled projections in the hGFAPcre/+;Sufufl/fl neocortex were present in the corpus callosum (Figure 8C) and were able to cross the midline (Figure 8D). These findings indicated that callosal projections typically formed by Cux1+ upper layer neurons were properly generated and projected into the contralateral hemisphere of the hGFAPcre/+;Sufufl/fl neocortex similar to control littermates.

We thank members of the Pleasure Lab for helpful discussions, Trung Huynh for genotyping, and Kurt Thorn and DeLaine Larsen at the UCSF Nikon Imaging Center for assistance with imaging. This work was supported by the NIH R01 NS075188 (S.J.P.) and a Ruth L. Kirschstein National Research Service Award F32NS087719 (O.R.Y.). 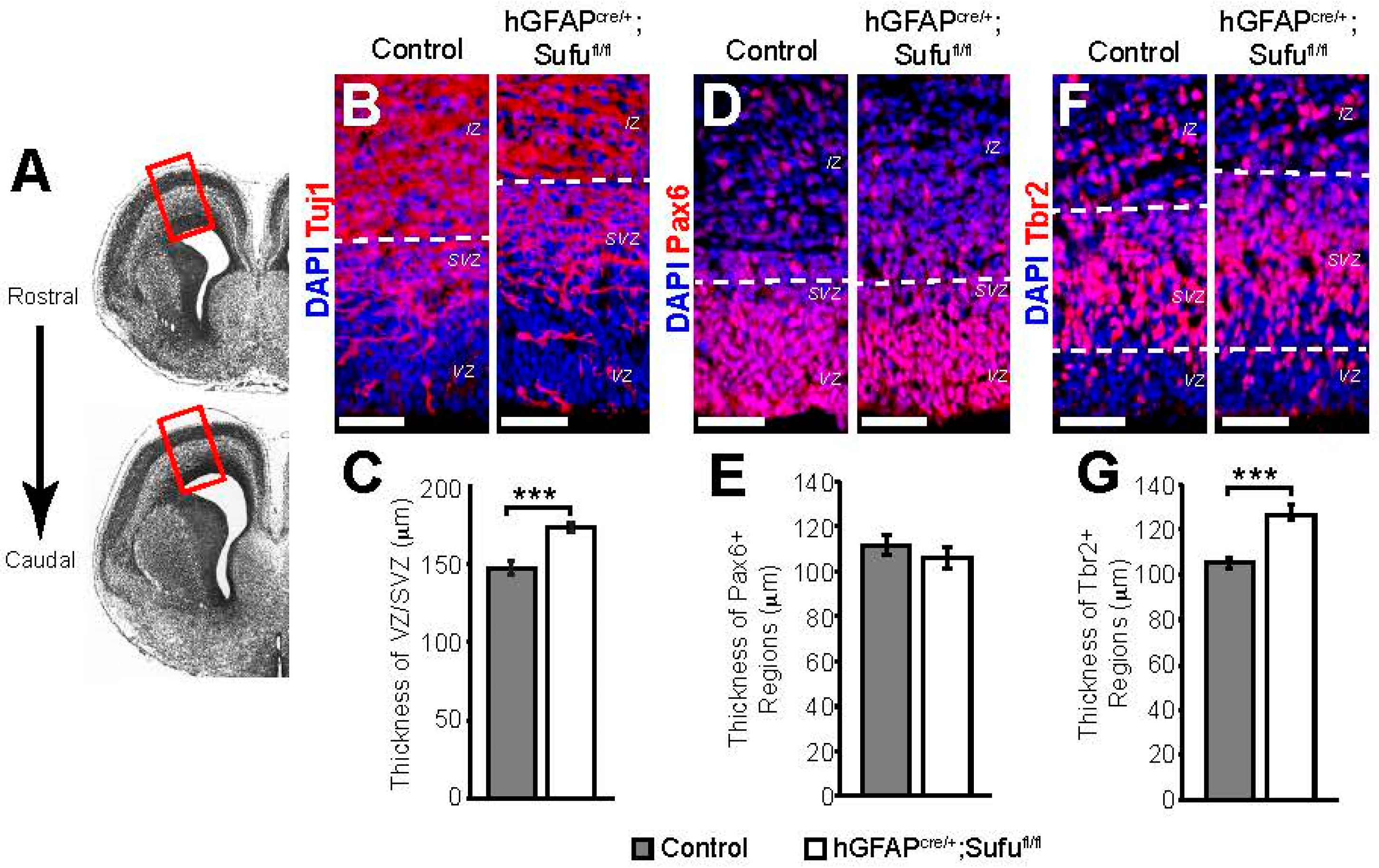 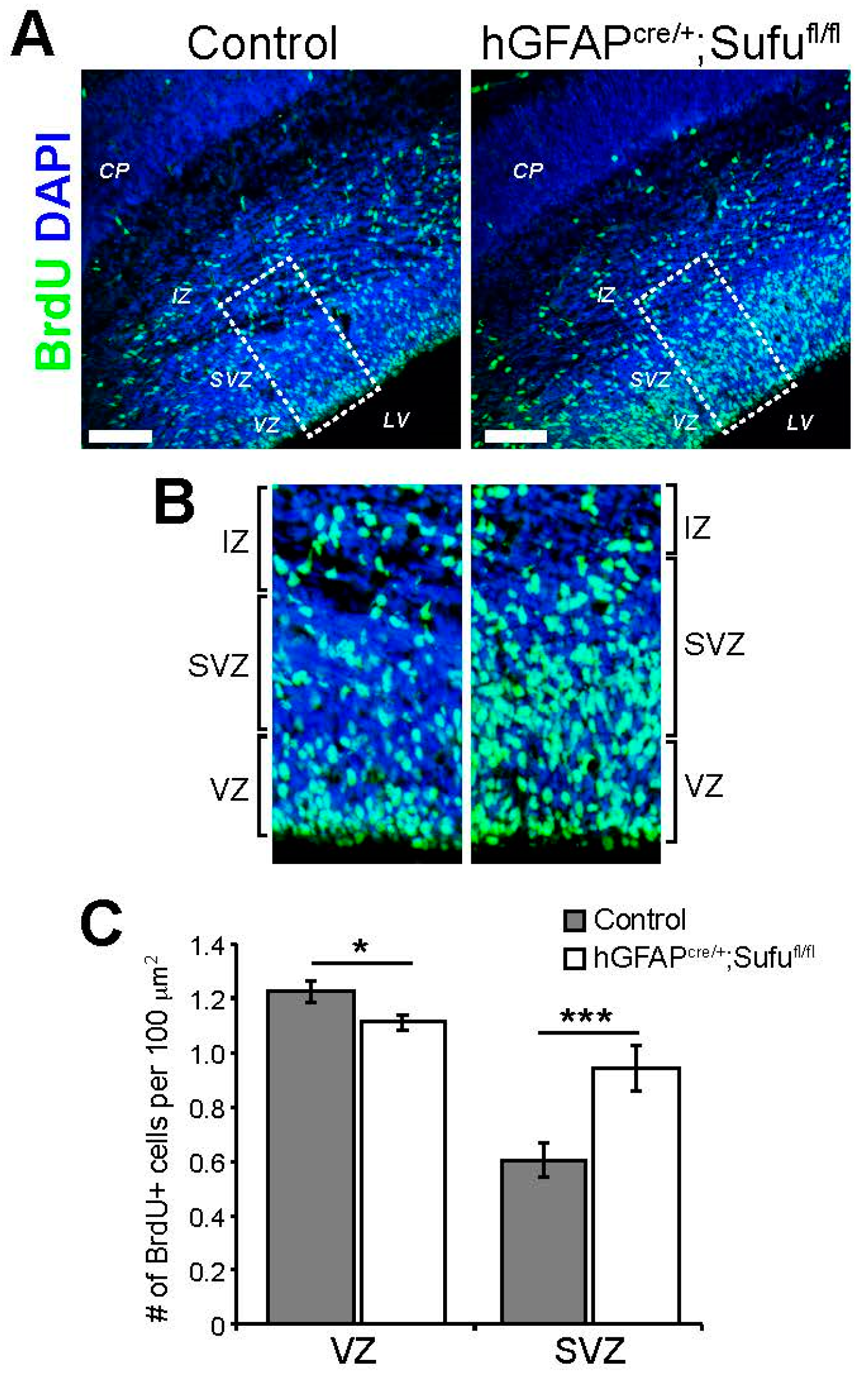 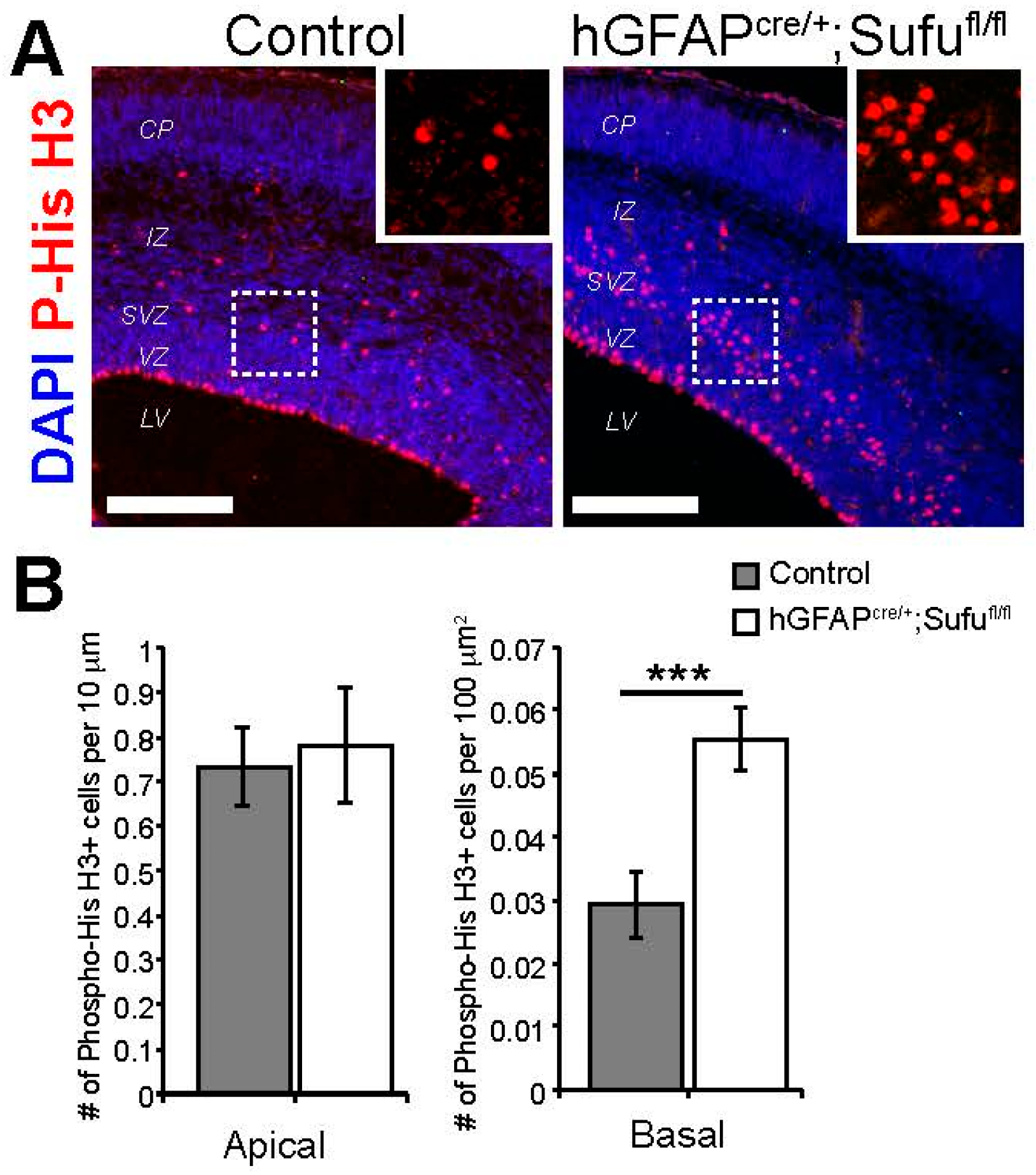 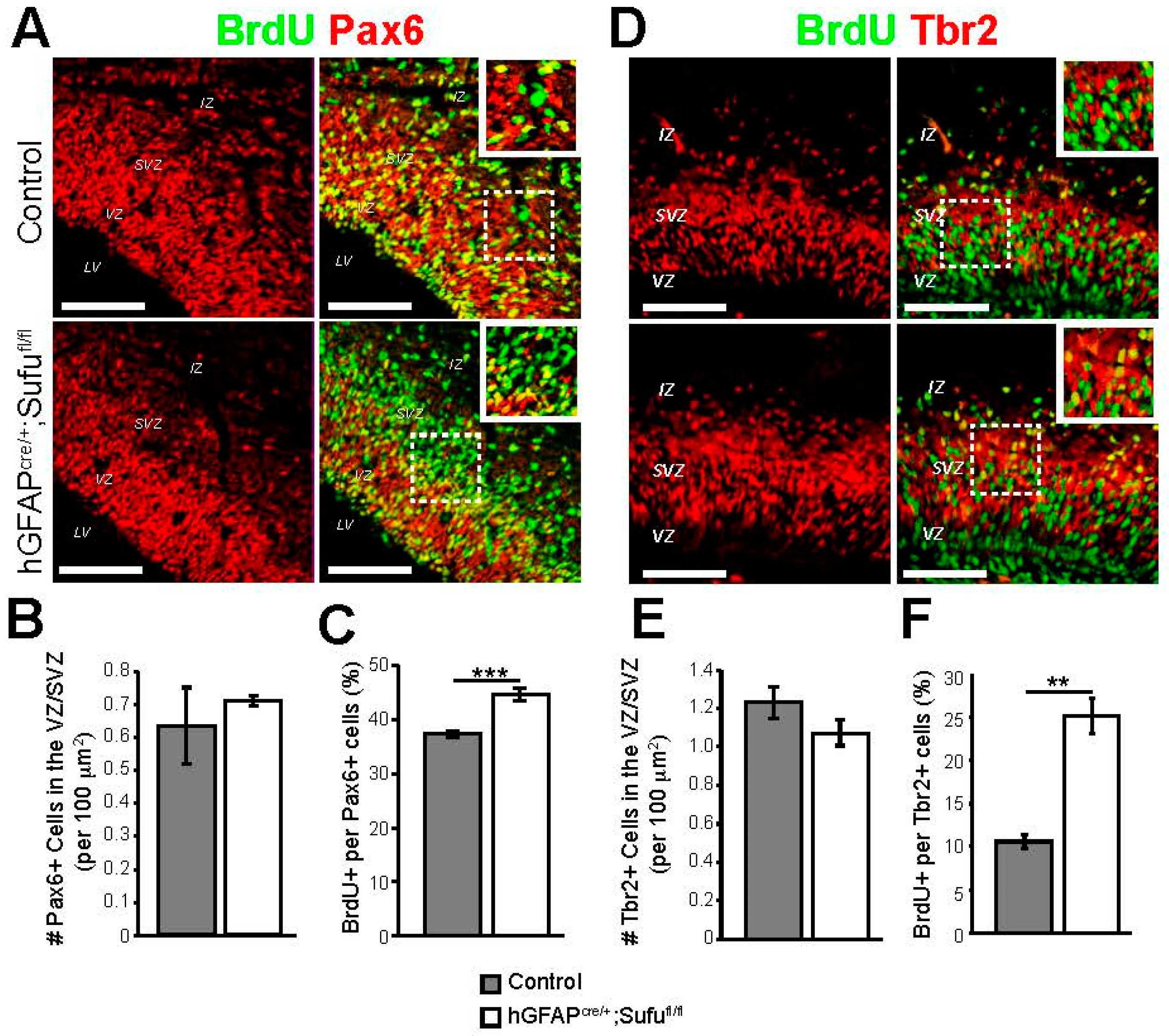 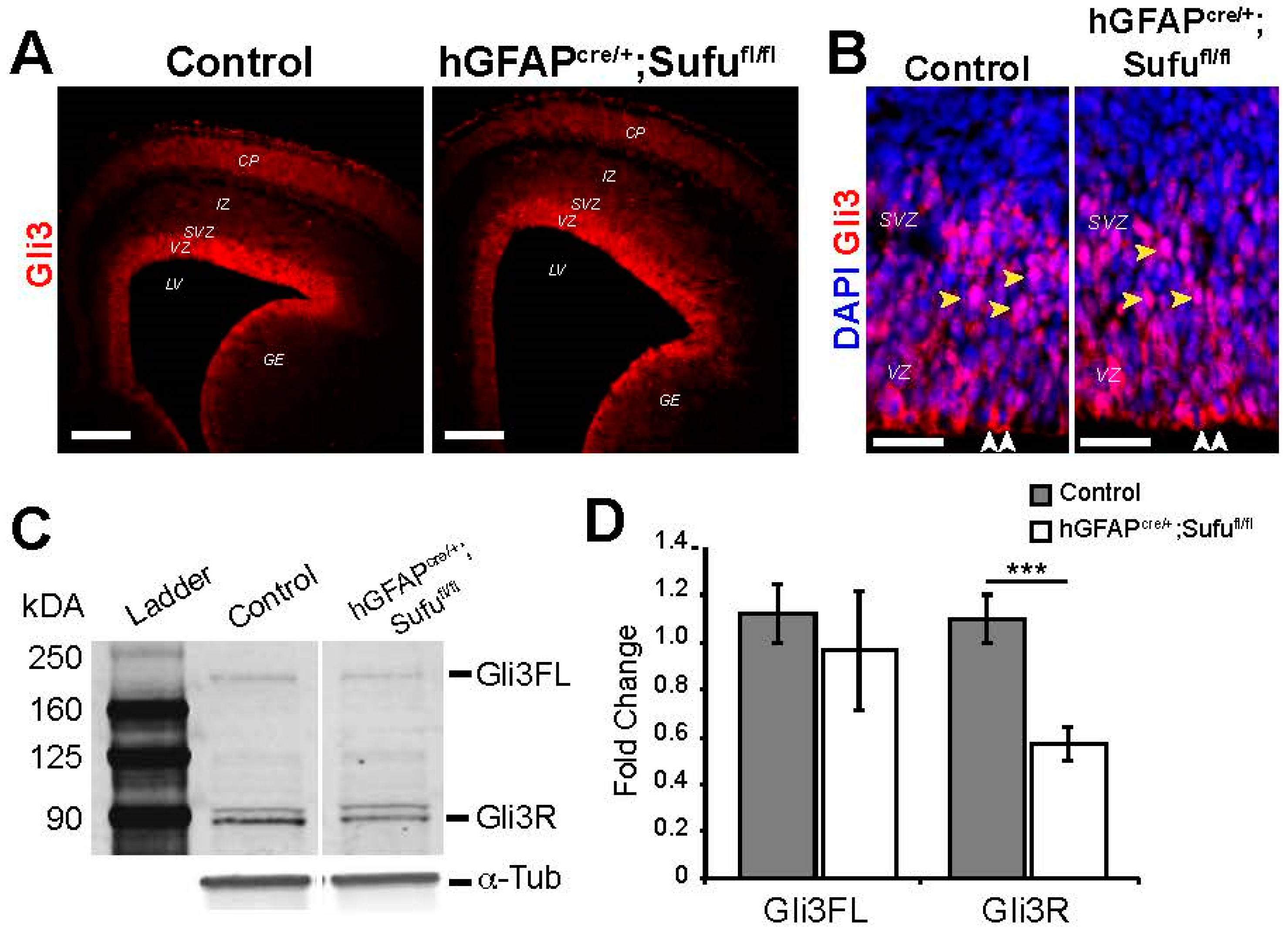 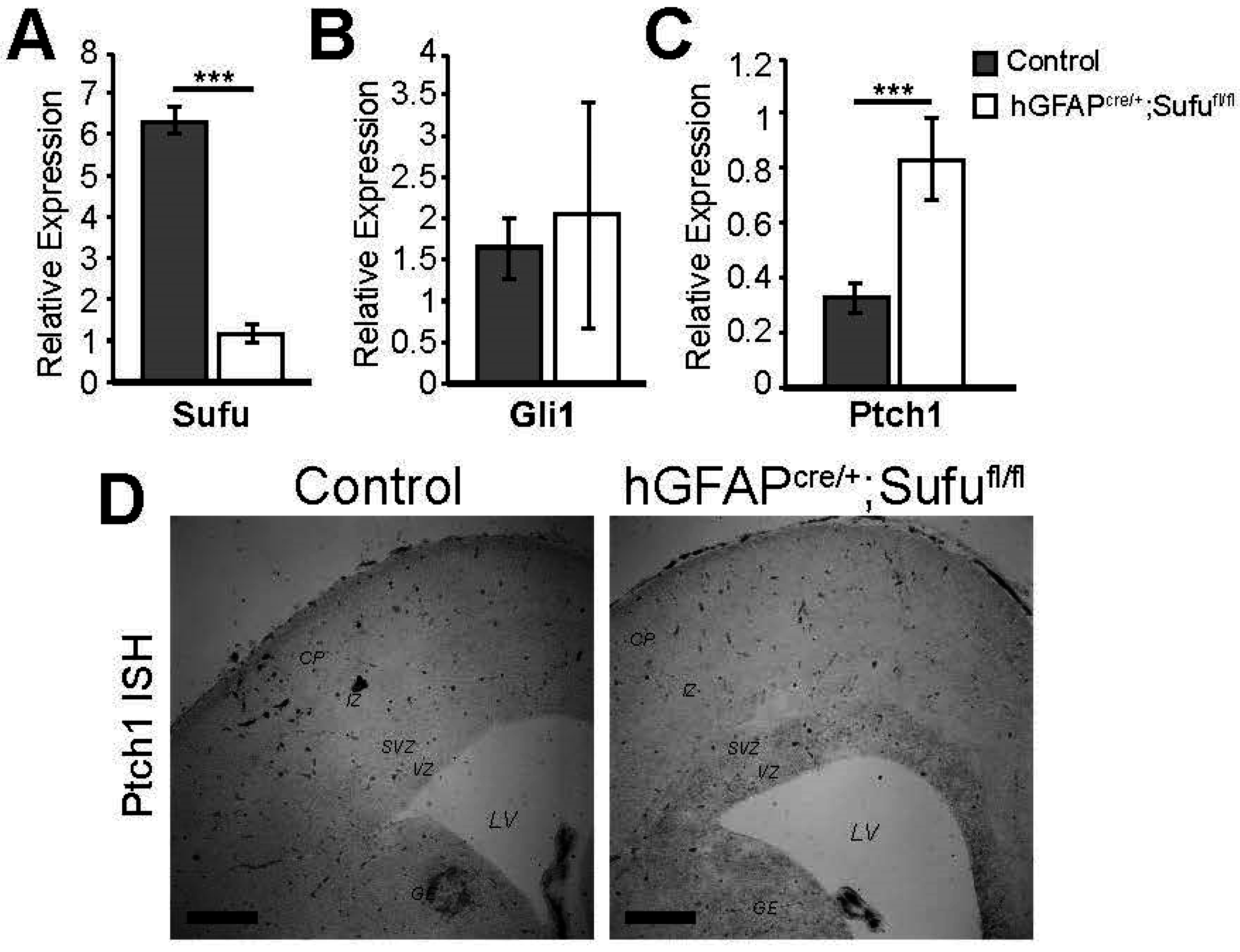 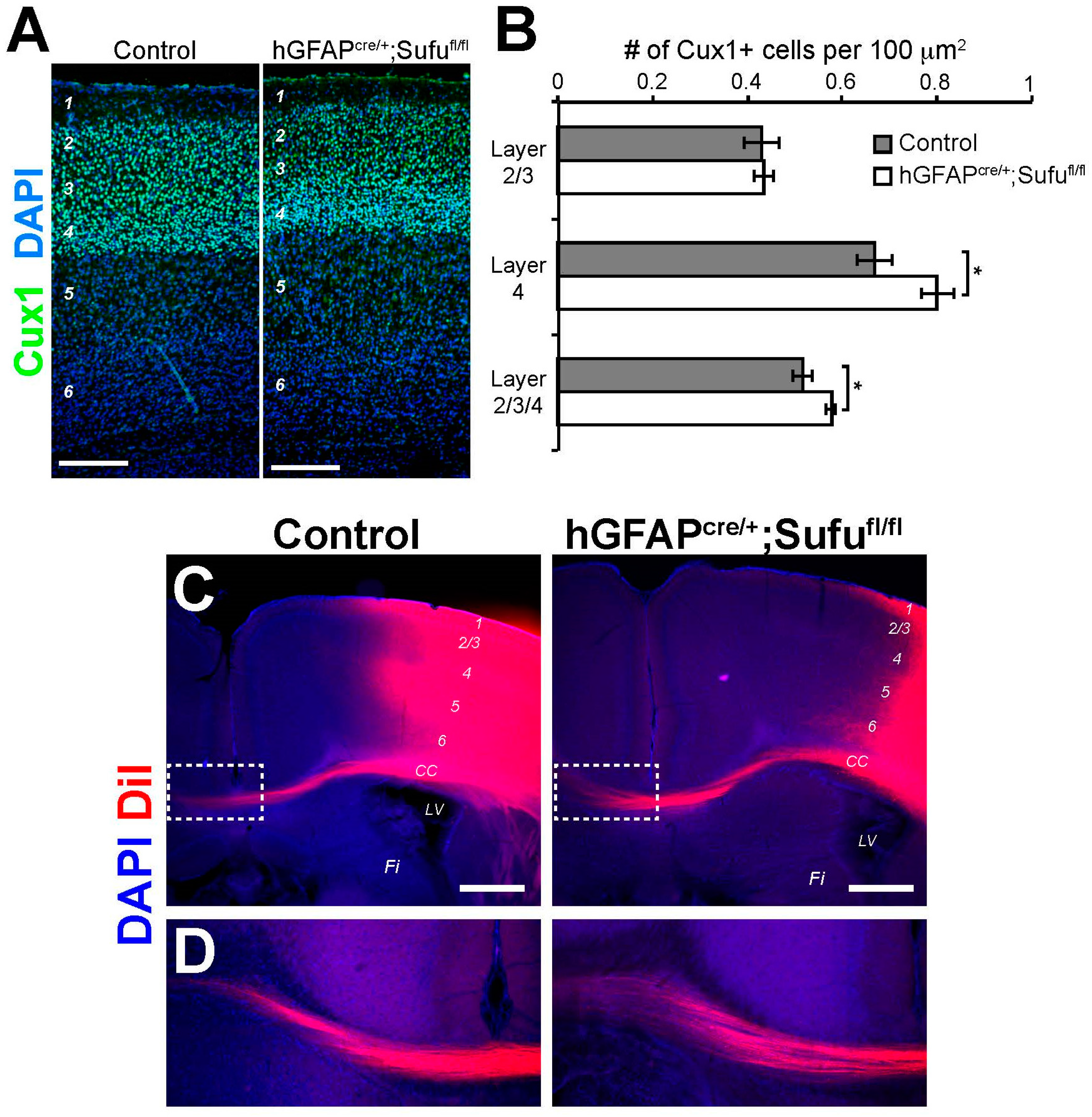