Beyond the Mammalian Heart: Fish and Amphibians as a Model for Cardiac Repair and Regeneration
Previous Article in Special Issue

Role of Chondrocytes in Cartilage Formation, Progression of Osteoarthritis and Cartilage Regeneration

The germ cell lineage in Xenopus is specified by the inheritance of germ plasm that assembles within the mitochondrial cloud or Balbiani body in stage I oocytes. Specific RNAs, such as nanos1, localize to the germ plasm. nanos1 has the essential germline function of blocking somatic gene expression and thus preventing Primordial Germ Cell (PGC) loss and sterility. Hermes/Rbpms protein and nanos RNA co-localize within germinal granules, diagnostic electron dense particles found within the germ plasm. Previous work indicates that nanos accumulates within the germ plasm through a diffusion/entrapment mechanism. Here we show that Hermes/Rbpms interacts with nanos through sequence specific RNA localization signals found in the nanos-3′UTR. Importantly, Hermes/Rbpms specifically binds nanos, but not Vg1 RNA in the nucleus of stage I oocytes. In vitro binding data show that Hermes/Rbpms requires additional factors that are present in stage I oocytes in order to bind nanos1. One such factor may be hnRNP I, identified in a yeast-2-hybrid screen as directly interacting with Hermes/Rbpms. We suggest that Hermes/Rbpms functions as part of a RNP complex in the nucleus that facilitates selection of germline RNAs for germ plasm localization. We propose that Hermes/Rbpms is required for nanos RNA to form within the germinal granules and in this way, participates in the germline specific translational repression and sequestration of nanos RNA. View Full-Text
Keywords: Xenopus oogenesis; nanos1 RNA localization; germline; germinal granules; RNP particle; nanos ribonucleoprotein complex Xenopus oogenesis; nanos1 RNA localization; germline; germinal granules; RNP particle; nanos ribonucleoprotein complex
►▼ Show Figures 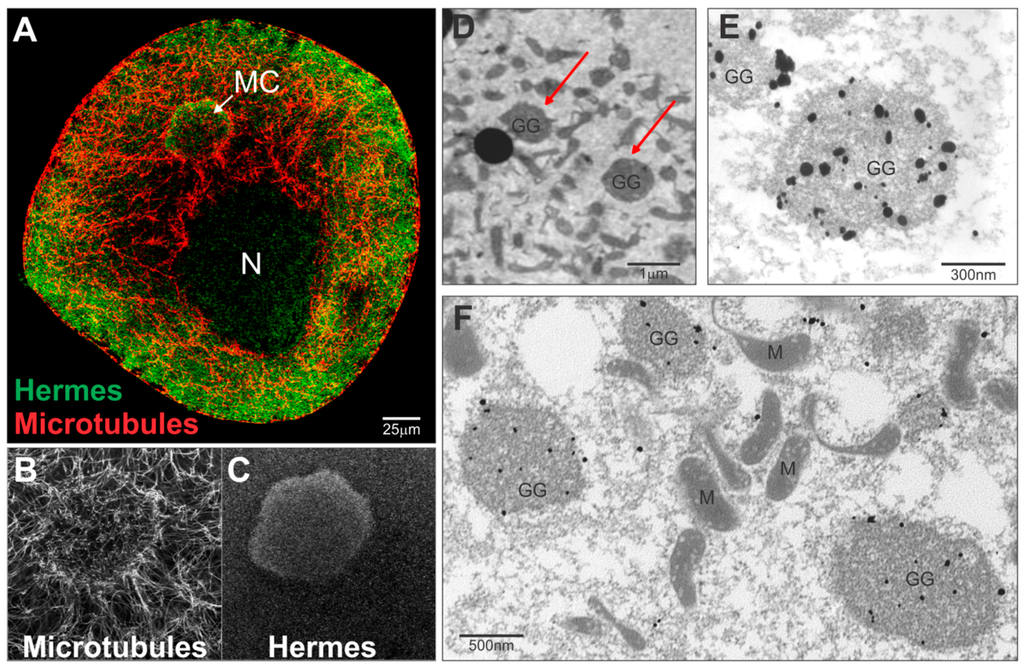