A Novel 3-URU Architecture with Actuators on the Base: Kinematics and Singularity Analysis
Next Article in Special Issue

Deep Reinforcement Learning for the Control of Robotic Manipulation: A Focussed Mini-Review
Previous Article in Journal

Robotic Detection and Grasp of Maize and Sorghum: Stem Measurement with Contact

This paper combines interval type-2 fuzzy logic with adaptive control theory for the control of a three degree-of-freedom (DOF) helicopter. This strategy yields robustness to various kinds of uncertainties and guaranteed stability of the closed-loop control system. Thus, precise trajectory tracking is maintained under various operational conditions with the presence of various types of uncertainties. Unlike other controllers, the proposed controller approximates the helicopter’s inverse dynamic model and assumes no a priori knowledge of the helicopter’s dynamics or parameters. The proposed controller is applied to a 3-DOF helicopter model and compared against three other controllers, i.e., PID control, adaptive control, and adaptive sliding-mode control. Numerical results show its high performance and robustness under the presence of uncertainties. To better assess the performance of the control system, two quantitative tracking performance metrics are introduced, i.e., the integral of the tracking errors and the integral of the control signals. Comparative numerical results reveal the superiority of the proposed method by achieving the highest tracking accuracy with the lowest control effort.
Keywords: adaptive control; 3-DOF helicopter; uncertainties; type-2 fuzzy logic adaptive control; 3-DOF helicopter; uncertainties; type-2 fuzzy logic

The helicopter is a highly unstable 3-DOF rotary motion system with nonlinear and coupled dynamics [1]. The operation of the 3-DOF helicopter is based on the rotation of the two rotors in which the propellers coupled to the motors generate a force called lift, as well as direction control. As mentioned, various linear/nonlinear control techniques have been studied for the control of a 3-DOF helicopter. In order to achieve a 3-dimensional movement, the helicopter performs three main angular movements as it is shown in Figure 1. The variables of the mathematical model are the roll angle (), the pitch angle (), the displacement angle (), and the thrust forces of each of the motors, i.e., front motor force () and back motor force (). There is a linear dependence between its three main angles:
As it is illustrated in Figure 1, all axes intersect at the same point (origin of the global coordinate frame) and the yaw angle () and roll angle () are perpendicular. The behavior of movements of the 3-DOF helicopter system can be described, using Euler–Lagrange formulation, by the following dynamic mathematical model [1]: with, , , . It is important to note that this model has been used and validated experimentally in [1]. Table 1 shows the physical values of the mathematical model used to validate the proposed control strategy.
Remark 1.
The studied 3-DOF helicopter in this paper is an underactuated system. In other words, the control of the three states (the pitch angle θ, the roll angle ϵ and the yaw angle ψ) is achieved with only two input forces.

This section is dedicated to the analysis of the performance of the 3-DOF helicopter whose physical parameters and control gains are defined in Table 1 and Table 2, respectively. All controllers have the same singleton fuzzy logic input membership functions for and that are set to and , respectively. In order to assess the performance and robustness of the closed-loop control system, the 3-DOF helicopter model is implemented in MATLAB/Simulink® by MathWorks Inc. Numerous tests are essential to validate the proposed controller’s ability to cope with various uncertainties.
Figure 3 shows the desired trajectory for all angles, which is considered as a step response of a critically damped second order system with a natural frequency rad/s. In each test, the tracking angle errors and control signals , , and are taken into account in the study of the helicopter system response under various operating conditions.

The helicopter’s tracking errors and the control signals , , and were used to study the system’s response under various operating conditions. First, the adaptive interval type-2 fuzzy logic control strategy was validated on the helicopter in the nominal case. Results are reported in Figure 4. As it is revealed, the motion tracking errors converge gradually to zero after approximately 2 s. The ability of the proposed controller in achieving high tracking accuracy was clearly demonstrated by the low magnitude of the tracking errors. A saturation of control signals at observed in Figure 4b due to a fast change in the system’s trajectories. It is important to note the controller remains stable under such condition. As it is shown in Figure 5, the fuzzy logic weights converge to finite limit after transient.
Next, the controller was tested under parametric uncertainties. For that, the mass of the system was changed by a factor of two and in another case by half. The tracking errors, reported in Figure 6, were kept within a similar magnitude as in the nominal case and converge to zero around the same time. This shows the controller’s resilience in presence of parametric uncertainties. The control efforts (especially ) increased when the mass of the system is doubled and decreased when it is cut in half, which is expected to adjust to the mass change.
To further demonstrate the robustness of the control scheme in handling uncertainties, unexpected sudden step disturbances of 1 rad are applied to the yaw, roll, and pitch at time 2 s, 3 s, and 4 s, respectively. Results depicted in Figure 7 reveal the controller’s capability in decaying tracking errors to zero without oscillations or unstable behavior. The benefit behind the use of intelligent control is shown by this test.
The adaptive interval type-2 fuzzy logic controller’s performance was contrasted against classical PID control, adaptive control presented in [34], and the adaptive sliding-mode control (SMC) method suggested in [37]. The tracking errors and the control efforts are depicted in Figure 8. It is revealed that both the intelligent and the PID controllers, unlike sliding-mode control and adaptive control, are able to decay the tracking errors to zero over time. However, the proposed controller was able to decay the errors faster than PID control with a lower error magnitude and control effort. Adaptive control needs persistent excitation for parameters’ convergence; and hence, high tracking accuracy may take relatively long time to achieve. In theory, sliding-mode is reached by discontinuous control at infinite switching frequency. Though, switching frequency is finite in real-world applications which yields discretization chattering phenomenon as it is shown in Figure 8. To deal with this problem, a boundary solution uses a saturation function to approximate the sign function in the sliding-mode manifold boundary layer. This alternative conserves in part the sliding-mode invariance property where states are confined to a small vicinity of the manifold. Thus, convergence to zero is not guaranteed since robustness is achieved only when sliding mode truly occurs. To quantitatively adjudge the trajectory tracking performance, two performance metrics are introduced. First, the integral of the tracking error was calculated over a single run. The second performance index consists of the integral of the control signals. These metrics are calculated as follow: where and are initial and final time instants, respectively. The obtained numerical values for both performance metrics are displayed in Table 3. The proposed FLC method yielded the lowest tracking performance index and control effort. Adaptive control and PID control show similar performance, which is mainly due to the fact that adaptive control needs time for parameters’ adaptation and convergence. On the other hand, the adaptive SMC achieves the highest tracking performance index and control effort due to its inherent chattering phenomenon.

In this paper, an adaptive interval type-2 fuzzy logic controller is designed for a 3-DOF helicopter. The control design uses an adaptation law to approximate the system’s inverse model. Consequently, no a priori parameters knowledge is required. Therefore, the control scheme achieves accurate tracking by a Lyapunov-based adaptation law in the presence of both structured and unstructured uncertainties. Unlike other control techniques, the system’s closed-loop stability is guaranteed by the Lyapunov direct method. The controller is tested under various operating conditions to assess its robustness against numerous uncertainties. Results illustrate that the 3-DOF helicopter’s motion can be tracked with a high precision. Comparison is carried out against three other controllers, i.e., PID control, adaptive control, and adaptive sliding-mode control. To better assess the performance of these controllers, two quantitative tracking performance metrics are introduced, i.e., the integral of the tracking errors and the integral of the control signals. Comparative results reveal the superiority of the proposed control method in achieving high tracking performance with a low control effort. Future work may envision conducting the comparative study under various operating conditions on the physical Quanser 3-DOF helicopter.

This research was funded by Natural Sciences and Engineering Research Council of Canada, grant number 315082. 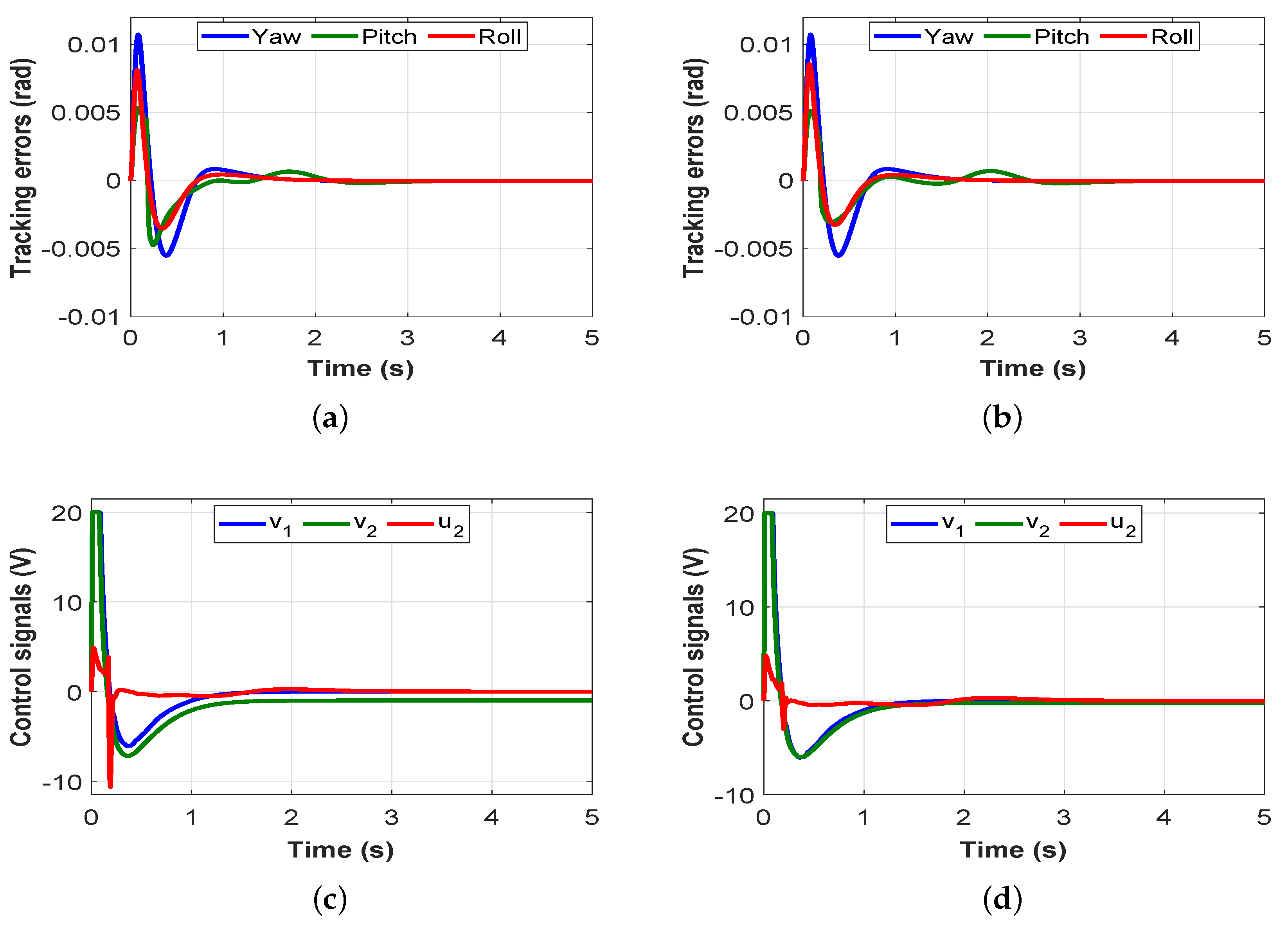 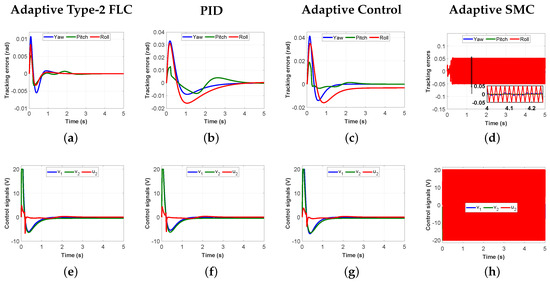 Table 3. Performance comparison.
Table 3. Performance comparison.
© 2020 by the authors. Licensee MDPI, Basel, Switzerland. This article is an open access article distributed under the terms and conditions of the Creative Commons Attribution (CC BY) license (http://creativecommons.org/licenses/by/4.0/).
We use cookies on our website to ensure you get the best experience. Read more about our cookies here.
Accept
We have just recently launched a new version of our website. Help us to further improve by taking part in this short 5 minute survey here. here.
Never show this again