Impermeable and Compliant: SIBS as a Promising Encapsulant for Ionically Electroactive Devices
Previous Article in Journal

In recent years, unmanned aerial vehicles (UAVs) have been used in several fields including, for example, archaeology, cargo transport, conservation, healthcare, filmmaking, hobbies and recreational use. UAVs are aircraft characterized by the absence of a human pilot on board. The extensive use of these devices has highlighted maintenance problems with regard to the propellers, which represent the source of propulsion of the aircraft. A defect in the propellers of a drone can cause the aircraft to fall to the ground and its consequent destruction, and it also constitutes a safety problem for objects and people that are in the range of action of the aircraft. In this study, the measurements of the noise emitted by a UAV were used to build a classification model to detect unbalanced blades in a UAV propeller. To simulate the fault condition, two strips of paper tape were applied to the upper surface of a blade. The paper tape created a substantial modification of the aerodynamics of the blade, and this modification characterized the noise produced by the blade in its rotation. Then, a model based on artificial neural network algorithms was built to detect unbalanced blades in a UAV propeller. This model showed high accuracy (0.9763), indicating a high number of correct detections and suggests the adoption of this tool to verify the operating conditions of a UAV. The test must be performed indoors; from the measurements of the noise produced by the UAV it is possible to identify an imbalance in the propeller blade. View Full-Text
Keywords: quadcopter UAV; artificial neural network; fault diagnosis; acoustic measurements; unbalanced propeller quadcopter UAV; artificial neural network; fault diagnosis; acoustic measurements; unbalanced propeller
►▼ Show Figures 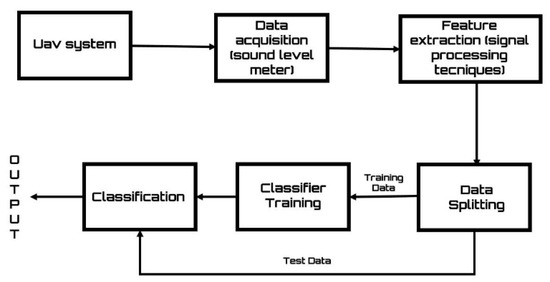