Sphingomyelin is found in the cell membrane of all eukaryotic cells, and was for a long time considered merely as a structural component. However, during the last two decades, metabolites of sphingomyelin, especially sphingosine 1-phosphate (S1P), have proven to be physiologically significant regulators of cell function. Through its five different G protein-coupled receptors, S1P regulates a wide array of cellular processes, ranging from stimulating cellular proliferation and migration, to the inhibition of apoptosis and induction of angiogenesis and modulation of cellular calcium homeostasis. Many of the processes regulated by S1P are important for normal cell physiology, but may also induce severe pathological conditions, especially in malignancies like cancer. Thus, understanding S1P signaling mechanisms has been the aim of a multitude of investigations. Great interest has also been shown in understanding the action of sphingosine kinase (SphK), i.e., the kinase phosphorylating sphingosine to S1P, and the interactions between S1P and growth factor signaling. In the present review, we will discuss recent findings regarding the possible importance of S1P and SphK in the etiology of thyroid cancer. Although clinical data is still scarce, our in vitro findings suggest that S1P may function as a “double-edged sword”, as the receptor profile of thyroid cancer cells largely determines whether S1P stimulates or blocks cellular migration. We will also discuss the interactions between S1P- and VEGF-evoked signaling, and the importance of a S1P1-VEGF receptor 2 complex in thyroid cancer cells. View Full-Text
Keywords: Thyroid; cancer; sphingosine 1-phosphate; sphingosine kinase; HERG; follicular; anaplastic Thyroid; cancer; sphingosine 1-phosphate; sphingosine kinase; HERG; follicular; anaplastic
►▼ Show Figures 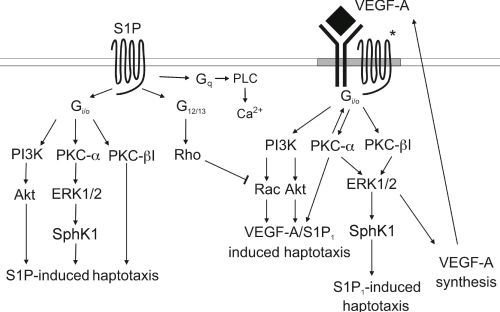