Targeting the Endocannabinoid CB1 Receptor to Treat Body Weight Disorders: A Preclinical and Clinical Review of the Therapeutic Potential of Past and Present CB1 Drugs
Previous Article in Special Issue

The Novel Serine/Threonine Protein Kinase LmjF.22.0810 from Leishmania major May Be Involved in the Resistance to Drugs such as Paromomycin

Hsp70 is a conserved molecular chaperone. How Hsp70 exhibits specialized functions across species remains to be understood. Plasmodium falciparum Hsp70-1 (PfHsp70-1) and Escherichia coli DnaK are cytosol localized molecular chaperones that are important for the survival of these two organisms. In the current study, we investigated comparative structure-function features of PfHsp70-1 relative to DnaK and a chimeric protein, KPf, constituted by the ATPase domain of DnaK and the substrate binding domain (SBD) of PfHsp70-1. Recombinant forms of the three Hsp70s exhibited similar secondary and tertiary structural folds. However, compared to DnaK, both KPf and PfHsp70-1 were more stable to heat stress and exhibited higher basal ATPase activity. In addition, PfHsp70-1 preferentially bound to asparagine rich peptide substrates, as opposed to DnaK. Recombinant P. falciparum adenosylmethionine decarboxylase (PfAdoMetDC) co-expressed in E. coli with either KPf or PfHsp70-1 was produced as a fully folded product. Co-expression of PfAdoMetDC with heterologous DnaK in E. coli did not promote folding of the former. However, a combination of supplementary GroEL plus DnaK improved folding of PfAdoMetDC. These findings demonstrated that the SBD of PfHsp70-1 regulates several functional features of the protein and that this molecular chaperone is tailored to facilitate folding of plasmodial proteins. View Full-Text
Keywords: Plasmodium falciparum; Hsp70; co-expression; chaperone function; specificity Plasmodium falciparum; Hsp70; co-expression; chaperone function; specificity
►▼ Show Figures 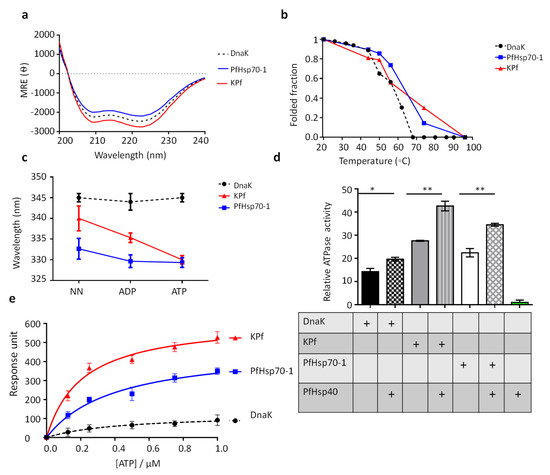