Fluostatins, benzofluorene-containing aromatic polyketides in the atypical angucycline family, conjugate into dimeric and even trimeric compounds in the post-biosynthesis. The formation of the C–C bond involves a non-enzymatic stereospecific coupling reaction. In this work, the unusual regio- and enantioselectivities were rationalized by density functional theory calculations with the M06-2X (SMD, water)/6–311 + G(d,p)//6–31G(d) method. These DFT calculations reproduce the lowest energy C1-(R)-C10′-(S) coupling pathway observed in a nonenzymatic reaction. Bonding of the reactive carbon atoms (C1 and C10′) of the two reactant molecules maximizes the HOMO–LUMO interactions and Fukui function involving the highest occupied molecular orbital (HOMO) of nucleophile p-QM and lowest unoccupied molecular orbital (LUMO) of electrophile FST2− anion. In particular, the significant π–π stacking interactions of the low-energy pre-reaction state are retained in the lowest energy pathway for C–C coupling. The distortion/interaction–activation strain analysis indicates that the transition state (TScp-I) of the lowest energy pathway involves the highest stabilizing interactions and small distortion among all possible C–C coupling reactions. One of the two chiral centers generated in this step is lost upon aromatization of the phenol ring in the final difluostatin products. Thus, the π–π stacking interactions between the fluostatin 6-5-6 aromatic ring system play a critical role in the stereoselectivity of the nonenzymatic fluostatin conjugation. View Full-Text
Keywords: fluostatin; conjugation, regioselectivity; stereoselectivity; π–π stacking interaction fluostatin; conjugation, regioselectivity; stereoselectivity; π–π stacking interaction
►▼ Show Figures 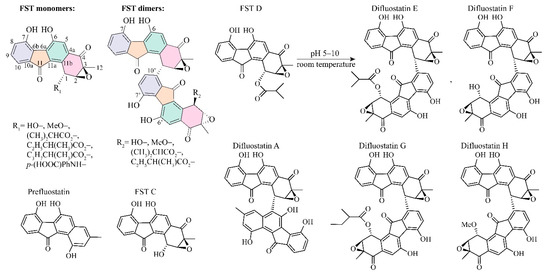