H0 Tensions in Cosmology and Axion Pseudocycles in the Stringy Universe

The tension between early and late is revised in the context of axion dark matter arising naturally from string theoretical integrations of antisymmetric tensor fields over non-trivial cycles. Certain early universe cycles may appear non-trivial from the perspective of a homology analysis focused on the early universe, while they may become trivial when analysed from the perspective of a homology theory reaching out to lower energies and later times. Such phenomena can introduce variations in the axion potential that would explain the observed tension. The decay of such pseudo-axions when the pseudo-cycles dissipate trigger axion-two-photon (otherwise having an extremely long lifetime) and axion-gravitational processes mediated by Chern–Simons couplings with observable electromagnetic or gravitational wave signals originating in the early universe.
Keywords: H0 tension; cosmological axions; stringy axions H0 tension; cosmological axions; stringy axions

2. WIMPs and Axions in Cosmology and Particle Physics

As noted before, axions appear due to integration of tensor fields over non-trivial cycles arising on the compactified manfiold of string theory. In QCD, the CP-violating term while being a total derivative and hence being trivial from the point of view of classical field equations, has a significant quantum impact due to its non-trivial topological properties. The topologically non-trivial field configurations can be seen by looking at the term in the action When we shift the parameter the action changes by and hence leaves the partition function unchanged. This suggests that the parameter represents a periodic parameter with a period equal to . The introduction of fermions will bring with it the chiral anomaly and the parameter will have to include the overall phase of the quark mass matrix, modifying it as in However, measurements have shown that (inference of from the electric dipole moment of the neutron, limited by experiments such as [33]). The solution to the strong-CP problem implies making the parameter a dynamical field a. At a classical level the action is obviously invariant to any shifts . This means that at the classical level, the axion is the Goldstone boson of a spontaneously broken global symmetry. Quantum perturbative effects preserve this symmetry but non-perturbative, topologically non-trivial QCD field configurations break it explicitly generating a periodic potential for the axion. In the case of the QCD axion, the axion obtains a vacuum expectation value which adjusts itself to render the resulting small. The axion couples to the gluons, as noted above, but also to other gauge bosons including photons, and to fermions by means of derivative couplings. It is important to note that their coupling to photons make the axion detectable at extremely intense laser facilities such as the ELI-NP [34].
While the justification of the axion resulting from the solution of the strong-CP problem is clear, one may ask more fundamental questions, namely why should a symmetry such as the Peccei–Quinn even exist and be explicitly broken by topologically non-trivial QCD fields. Such angular degrees of freedom are certainly unexpected in a fundamental theory based on standard quantum field theory. Pseudoscalars with axion-like properties are, however, quite natural in string theory compactifications. They may appear as Kaluza–Klein zero modes of antisymmetric tensor fields. The Neveu–Schwarz 2-form that arises in all string theories, or the Ramond–Ramond forms arising in type string theory as well as the forms arising in string theory are such examples. Higher order antisymmetric tensor fields, upon compactification, typically give rise to a large number of Kaluza–Klein zero modes which are determined by the topology of the underlying compact manifold. In particular, considering a single two form or one obtains a number of massless scalar fields equal to the number of homologically non-trivial closed two-cycles in the underlying manifold. We can look at the Kaluza–Klein expansion for the two-form considering the non-compact coordinates x and the compact coordinates y with being the basis for closed non-exact two forms (cohomologies) dual to the cycles in our manifold, obeying the constraint that Similarly, the number of pseudo-scalar zero modes corresponding to is equal to the number of homologically non-trivial distinct four-cycles. As it has been noted in [35] the number of cycles in most compactifications is extremely large leading to many axion-like fields being predicted in general by string theory. When going to the four dimensional effective theory the scalar fields resulting from the KK reduction are massless and have a flat zero potential resulting from the higher dimensional gauge invariance of the antisymmetric tensor field action. This invariance also ensures that no perturbative quantum effect can generate a potential. However, antisymmetric tensor fields couple by means of Chern–Simons terms. After KK reduction these terms can couple axion fields to the gauge fields. This has been theoretically observed in type theory with a axion with a brane wrapped over the associated two-cycle. String theory therefore can produce particles with the qualitative features of the QCD axion. Not only that, but there are quite many such particles expected from string theoretical arguments. However, several string axions can be removed at tree level from the string spectrum of light fields by fluxes, branes, or orientifold planes pushing the mass of the axions towards the string scale [35]. In addition, even if the axion does not become heavy due to tree level effects, its potential acquires non-perturbative contributions from world-sheet instantons, euclidean D-branes wrapping the cycle, gravitational instantons, etc. Such corrections may ruin the strong CP solution.

4. Axion Pseudo-Cycles and the Tension

The problem of a discrepancy between early and late Hubble constant behaviour has been analysed from the perspective of the axion field and its potential. An additional element has been integrated, namely the fact that in the early stages of cosmological evolution, pseudo-cycles in the underlying manifold could contribute to additional axion cycles visible only at the very early times. These would decay once the pseudo-homology became trivial homology and the pseudo-cycles would vanish in the background geometry. However, they would account for additional particle production and additional contributions towards the re-heating phase. Therefore, not only would such pseudo-cycles offer new computational flexibility required for the explanation of the early vs. late Hubble constant discrepancy, but they would also add new contributions to the re-heating phase of the universe.

This research was supported by the Institute of Atomic Physics from the National 415 Research–Development and Innovation Plan III /Program 5/Subprogram 5.1 ELI-RO, 416 project ELI-RO No 07/2020. 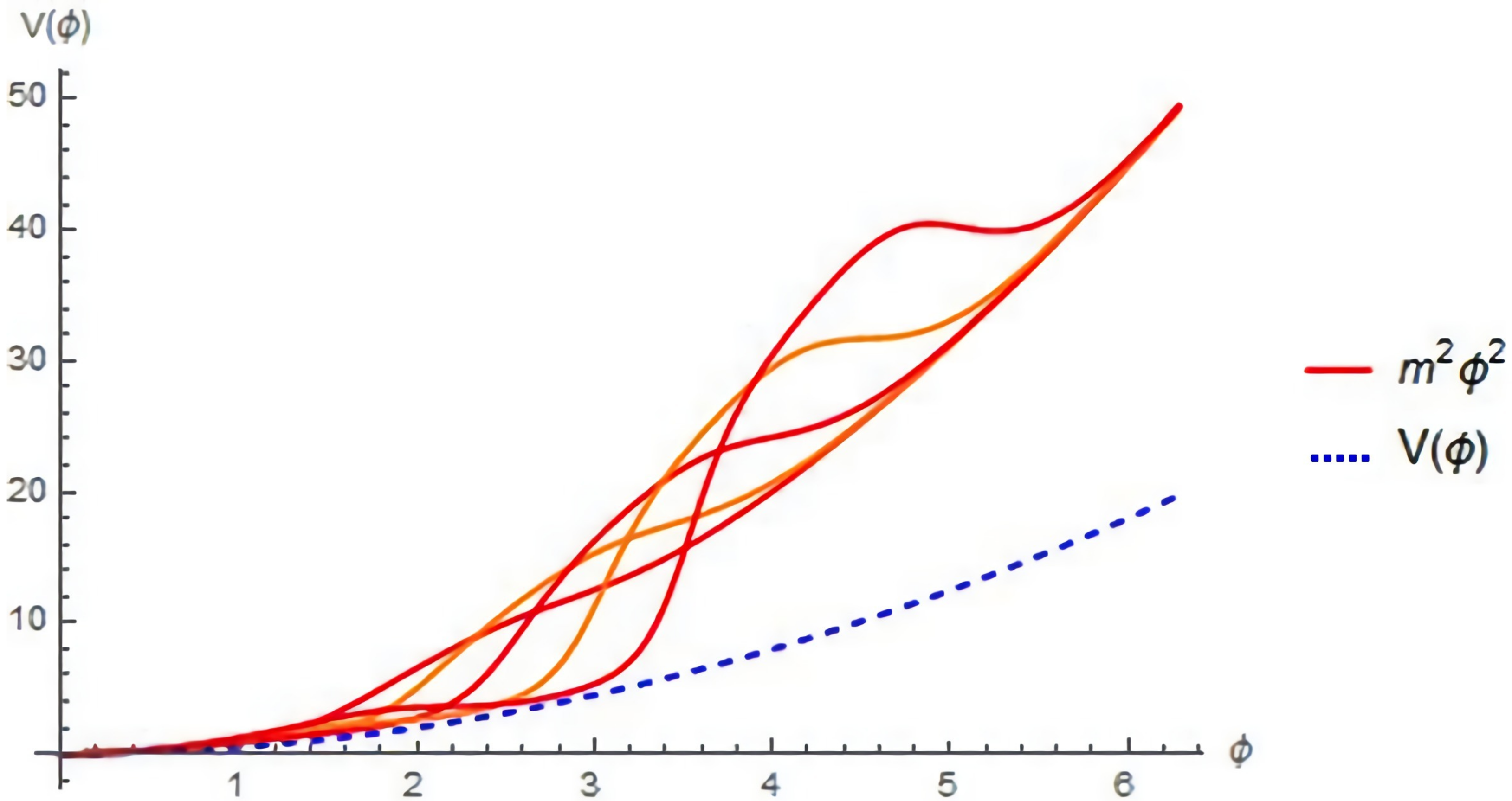