On the Heating of AGN Magnetospheres
Previous Article in Journal

We study the size frequency distribution of the blocks located in the deeply fractured, geologically active Enceladus South Polar Terrain with the aim to suggest their formative mechanisms. Through the Cassini ISS images, we identify ~17,000 blocks with sizes ranging from ~25 m to 366 m, and located at different distances from the Damascus, Baghdad and Cairo Sulci. On all counts and for both Damascus and Baghdad cases, the power-law fitting curve has an index that is similar to the one obtained on the deeply fractured, actively sublimating Hathor cliff on comet 67P/Churyumov-Gerasimenko, where several non-dislodged blocks are observed. This suggests that as for 67P, sublimation and surface stresses favor similar fractures development in the Enceladus icy matrix, hence resulting in comparable block disaggregation. A steeper power-law index for Cairo counts may suggest a higher degree of fragmentation, which could be the result of localized, stronger tectonic disruption of lithospheric ice. Eventually, we show that the smallest blocks identified are located from tens of m to 20–25 km from the Sulci fissures, while the largest blocks are found closer to the tiger stripes. This result supports the ejection hypothesis mechanism as the possible source of blocks. View Full-Text
Keywords: Enceladus; icy blocks; SFD; tiger stripes; formative process; comet 67P/Churyumov-Gerasimenko Enceladus; icy blocks; SFD; tiger stripes; formative process; comet 67P/Churyumov-Gerasimenko
►▼ Show Figures 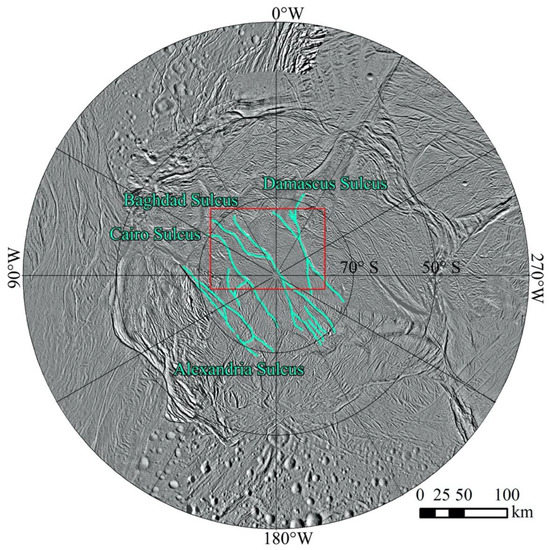