Symmetries, a Systematic Construction of Invariant Fields and AdS Backgrounds

We describe 4D evaporating black holes as quantum field configurations by solving the semi-classical Einstein equation and quantum matter fields in a self-consistent manner. As the matter fields, we consider N massless free scalar fields (N is large). We find a spherically symmetric self-consistent solution of the metric and the state . Here, is locally geometry, and provides , where is the ground state of the matter fields in the metric and consists of the excitation of s-waves that describe the collapsing matter and Hawking radiation with the ingoing negative energy flow. This object is supported by a large tangential pressure due to the vacuum fluctuation of the bound modes with large angular momenta . This describes the interior of the black hole when the back reaction of the evaporation is taken into account. In this picture, the black hole is a compact object with a surface (instead of horizon) that looks like a conventional black hole from the outside and eventually evaporates without a singularity. If we count the number of configurations that satisfy the self-consistent equation, we reproduce the area law of the entropy. This tells that the information is carried by the s-waves inside the black hole. also describes the process that the negative ingoing energy flow created with Hawking radiation is superposed on the collapsing matter to decrease the total energy while the total energy density remains positive. Finally, as a special case, we consider conformal matter fields and show that the interior metric is determined by the matter content of the theory, which leads to a new constraint to the matter contents for the black hole to evaporate. View Full-Text
Keywords: black holes; quantum gravity; black hole evaporation; self-consistent solution; semi-classical Einstein equation; information paradox black holes; quantum gravity; black hole evaporation; self-consistent solution; semi-classical Einstein equation; information paradox
►▼ Show Figures 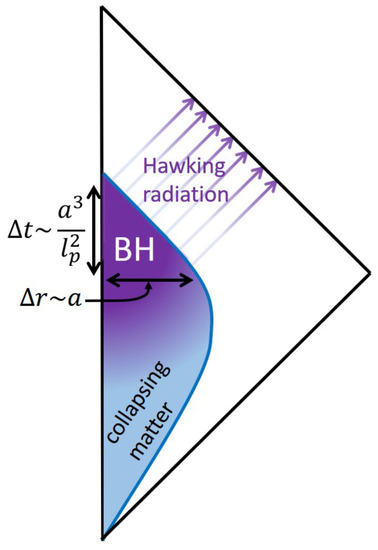