Solar ultraviolet (UV) light is composed of UVA (320–400 nm), UVB (280–320 nm), and UVC (200–280 nm). UVC is completely blocked by the ozone layer, while only 90–95% of UVA and 5–10% of UVB reach the Earth and affect human skin. While the level of UVB reaching the ground is lower, UVB energy is more harmful than UVA. Most of the UVB radiation can permeate into the epidermis layer, which is composed of at least 80% keratinocyte cells. Numerous studies reported that UVB exposure to the skin can stimulate intracellular reactive oxygen species (ROS) overproduction, mediated oxidative damage, and enhanced risk of skin carcinogenesis [1,2,3,4].
ROS play an important role in the initiation and induction of an inflammatory response. ROS induce oxidative damage by oxidizing and modifying various cellular molecules such as lipids, DNA, and proteins [1,4,5,6]. During skin exposure to UVB, the intracellular ROS is increased and mediates activation of transcription factors, including nuclear factor-kappa B (NF-κB). In latent stages, NF-κB associated with an inhibitor of κB (IκBs) is in an inactive form. The excessive intracellular ROS molecules can drive modification of IκBs proteins, which leads to their degradation through ubiquitination. This event activates NF-κB translocation from the cytosol into the nucleus, followed by up-regulating the gene expression of inflammatory mediators such as interleukins (ILs), cyclooxygenase-2 (COX-2), and inducible nitric oxide synthase (iNOS) [5,7,8,9,10]. Likewise, UVB and intracellular ROS mediate the induction of mitogen-activated protein kinases (MAPKs), especially p38 MAPKs and c-Jun NH2-terminal kinase (JNK). JNK mostly activates c-Jun phosphorylation at a positive regulatory domain, thereby activating the transcription of various genes. Previous studies suggested that p38 MAPKs and JNK are primarily responsible for oxidative stress as well as UV radiation. p38 MAPKs and c-Jun promote the AP-1 complex, which can turn on gene expression to enhance skin inflammation [11,12,13,14,15,16].
Therefore, in this study, we demonstrated that UVB and intracellular ROS are associated with skin inflammation. In a previous publication, we found that the purple corn silk (PCS) extract showed antioxidant power through scavenging free radicals and decreased intracellular ROS in UVB-treated HaCaT cells [17]. Corn silk, part of a kind of female corn, is an important source of polyphenols. Some reports indicated that purple corn silk extract is rich in anthocyanin as a major component [18,19,20,21,22,23,24]. However, information about the role of PCS extract against UVB-induced inflammation in keratinocyte cells is not yet investigated. Hence, in this study, we described the potential of PCS extract against the UVB-induced inflammatory response in keratinocyte HaCaT cells.

Generally, the epidermal layer acts as the first line of defense against solar UV through UV absorb. The PCS extract can minimize the effects of UV on skin cells, as shown in Figure 1; 1 mg/mL of PCS extract can absorb mainly the UVB. These data indicate that PCS extract acted as physical UVB protection, preventing UVB energy from entering skin keratinocyte cells.

In a previous study, we demonstrated that PCS extract at concentrations of 0.3, 0.5, and 1 mg/mL prevented cell death in UVB-treated cells [17]. Therefore, in this study, flow cytometry was conducted to examine the sub-G1 population, indicating fragmented DNA in dead cells. These results were used to confirm the anti-cell-death activity of PCS extract before subsequent experiments. The result showed that the UVB-control group significantly increased sub-G1 content at level p < 0.001 compared to the non-UVB group, whereas PCS extract reduced cell death higher than the UVB-control group (Figure 2). This result confirms that PCS extract inhibits cell death induction in UVB-treated HaCaT cells.

The increased NF-κB function relates to cellular inflammation. Immunofluorescence staining was used to determine NF-κB activity via monitoring the translocation of NF-κB from the cytosol into the nucleus. The results demonstrated that UVB increased NF-κB nuclear translocation compared to the non-UVB group. In contrast, cells pre-treated with PCS extract showed a strong attenuation of this event compared to the UVB-control group in a dose-dependent manner, as shown in Figure 3a. Furthermore, we found that UVB significantly increased NF-κB protein expression, which was inhibited by PCS extract (Figure 3b). These results indicated that PCS extract suppressed NF-κB nuclear translocation and protein expression in UVB-induced HaCaT cells.

In a subsequent experiment, we investigated the expression of proinflammatory cytokines regulated by NF-κB activities, including iNOS and COX-2. In unstimulated keratinocyte cells, these proteins were at a low level. In contrast, upon the stimulation of HaCaT cells by UVB irradiation, both iNOS and COX-2 levels were significantly increased (p < 0.001) compared to the non-UVB group, whereas 0.3, 0.5, and 1 mg/mL of PCS extract significantly decreased iNOS and COX-2 levels when compared to the UVB-control group, as shown in Figure 4. These findings prove that PCS extract was an effective inhibitor in the inflammation process in UVB-exposed human keratinocyte cells.

The purple stigma of Zea mays L. was used to prepare the PCS extract, which was obtained from Prof. Dr. Malyn Ungsurungsie. The extraction method was as in our previous study [17]. Briefly, the purple corn style was harvested from Khonkaen province, Thailand, and kept in the laboratory at the Plant Breeding Research Centre, Khonkaen University, Thailand (Voucher No. 050914T001). The fresh specimen was dried at 50 °C in an oven to remove humidity from sample plants. Then, the specimens were ground into a powder using an electric blender. After that, 10 g of dry purple corn silk powder was immersed in 100 mL of 50% propylene glycol (PG) for 2 days, followed by the filtration of the extract solution through cheesecloth and filter paper Whatman No.4. Then, the filtrated PCS extract solution was evaporated using a vacuum evaporator and freeze-dried in a lyophilizer. Then, the PCS extract was kept in the dark at −20 °C until use.

A UV incubator (BIO SUN Ultraviolet VILBER LOURMAT) consisting of UVB light (2 × 30 W) at a wavelength of 312 nm was used as a UV source, and the irradiation distance was 25 mm. Cells were placed in 1 mL of phosphate-buffered saline (PBS) and exposed to a UVB lamp in a UV incubator without a plastic lid. After UVB irradiation, cells were placed in the fresh medium and incubated at 37 °C and 5% CO2 in a cell culture incubator (Forma™ Steri-Cult™, Thermo Fisher Scientific Inc., Waltham, MA, USA) before subsequent experiments.

The human keratinocyte HaCaT cell line was purchased from American Type Culture Collection (ATCC, Manassas, VA, USA). The cells were maintained in DMEM medium supplemented with 10% FBS, 100 U/mL penicillin, and 100 μg/mL streptomycin in T75 tissue culture flasks as a monolayer. Cells were grown in a humidified incubator at 37 °C and 5% CO2. At 80% confluence every 2–3 days, cells were subcultured by 0.25% trypsin-EDTA.

Cells were seeded in 30 × 104 cells/well overnight and pre-treated with PCS extract at concentrations of 0.3, 0.5, and 1 mg/mL for 1 h. Then, the cells were exposed to 25 mJ/cm2 UVB and incubated with fresh medium at 37 °C for 24 h before being harvested using 0.25% trypsin-EDTA. Then, the supernatant was removed by centrifugation at 2000 rpm for 3 min. Cell pellets were fixed with 70% ice-cold ethanol, then washed and stained with Guava cell cycle® reagent for 30 min at room temperature in the dark. The sub-G1 content was determined using a Guava EasyCyte™ flow cytometer and GuavaSoft™ software (Merck Millipore Crop., Darmstadt, Germany).

HaCaT cells were grown on glass coverslips in 35 mm culture dishes (30 × 104 cells/well) overnight. Cells were pre-treated with PCS extract at concentrations of 0.3, 0.5, and 1 mg/mL for 1 h followed by the UVB exposure, then incubated at 37 °C for 1 h. After that, cells were fixed with 4% paraformaldehyde for 10 min and permeabilized with 0.5% Triton X-100. Then, cells were blocked with 3% bovine serum albumin (BSA) and incubated with an antibody against NF-κB (1:250) at 4 °C overnight. After incubation, cells were incubated with secondary antibody conjugated with Alexafluoro-546 (1:500) at room temperature, and the nuclei were stained with 5 μg/mL of Hoechst33342 dye. The fluorescence signals were observed under a fluorescent microscope (IX71 Olympus, Tokyo, Japan).

In conclusion, we found that the PCS extract presented the ability to attenuate the inflammation in human keratinocyte cells by mainly suppressing the activation of NF-κB and c-Jun, resulting in the decrease in inflammatory cytokines COX-2 and iNOS. Therefore, the PCS extract may be suitable for development as a novel natural inflammatory preventive agent due to the UVB exposure of the skin.

Investigation and writing—original draft preparation, W.P.; writing—review and editing, S.I.; resources (extract preparation), M.U.; supervision, funding acquisition and validation, R.W. All authors have read and agreed to the published version of the manuscript.

The datasets analyzed during the current study are available from the corresponding author on reasonable request.

We would like to thank the Research Division, Faculty of Medicine, Srinakharinwirot University, Bangkok, Thailand. 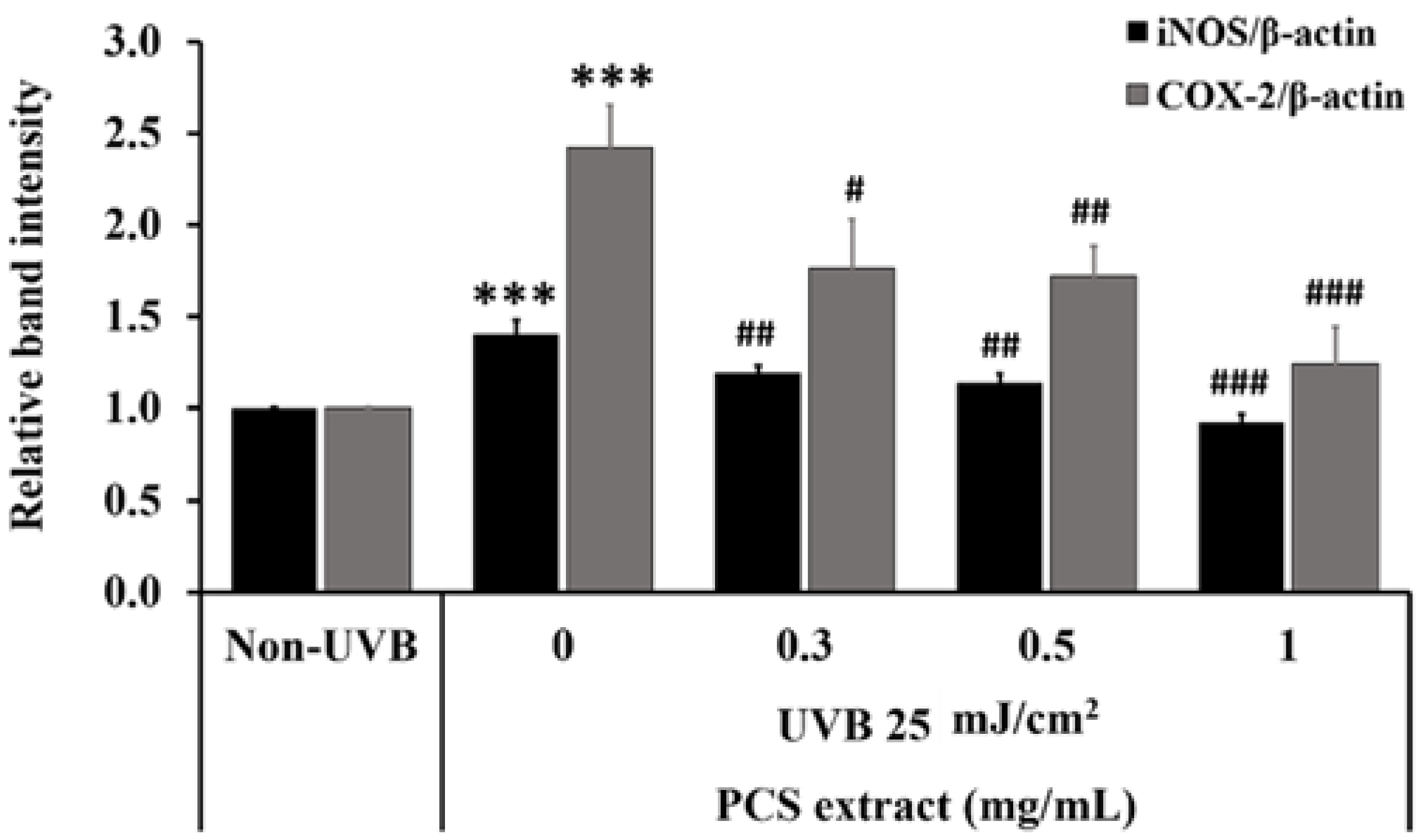