Combating the COVID-19 pandemic warrants the exploitation of all the available tools and implies a major focus on both the biological and the physical properties of the causing virus (SARS-CoV2). We hereby introduce a new prophylaxis hypothesis by decreasing the viral load in the body entrances such as the nose and the mouth using pharmaceutical and cosmeceutical preparations that incorporate viral electrostatic repulsive nanofibers fabricated from an abundant marine-derived or a fermentation product polymer; Ԑ-poly-l-lysine was prepared using the electrospinning technique.
Keywords: COVID-19; nanofibers; viral; marine; polymer; electrospinning COVID-19; nanofibers; viral; marine; polymer; electrospinning

The Coronavirus Disease—2019 (COVID-19) pandemic caused by the coronavirus infection has been a serious and costly public health crisis during the year 2020. As of 1 December 2020, more than 62 million confirmed cases have been detected and officially recorded by the World health Organization (WHO) (https://www.who.int/emergencies/diseases/novel-coronavirus-2019) all over the globe.
It seems that the respiratory tract entries are becoming humanity’s new Achilles heel in its current battle against the COVID-19 pandemic that warrants extra care [1].
The severe acute respiratory syndrome coronavirus 2 (SARS-CoV-2), an RNA virus, is the initiating factor of COVID-19 [2]. In fact, the infection is mainly transmitted via the inhalation of aerosol particles spreading during talking and/or breathing in close proximity to an infected person. These particles might also remain dispersed in the air, posing a risk of infection transmission [3]. The reported symptoms caused by COVID-19 encompass significant variation ranging from asymptomatic presentation or mild symptoms (fever, fatigue and/or dry cough) to severe acute respiratory distress syndrome, with significant hypoxia. Sometimes, multi-organ involvement may happen which could be fatal [4,5].
A key contributing factor for the rapid spread of COVID-19 lies in its ability to shed high levels of the virus in the upper respiratory regions of the infected persons, even among pre-symptomatic/asymptomatic patients [6]. Thus, several concerns have been raised regarding the possibility of infection transmission by asymptomatic patients [7]. Accordingly, there is a crucial need to develop innovative modalities to provide adequate protection to combat COVID-19 especially for those who are exposed to high viral loads on a routine basis like the health care providers or those in close contact with an infected person in general.
Thorough investigation of the structural characteristics of the virulent virus, SARS-CoV-2, could provide us with some new clues for COVID-19 prevention and control [8]. Certainly, the previously confirmed information and the scientists’ knowledge about coronaviruses enlightened and helped the scientific researchers to understand many aspects of SARS-CoV-2. Unfortunately, many aspects remain vague. Consequently, COVID-19 is still difficult to fully understand [2,9]. Originally, the causing virus has four main structural proteins: the spike (S) protein, the membrane (M) protein, the envelope (E) protein, and the nucleocapsid (N) protein [10,11,12]. Similar to the other RNA viruses, SARS-CoV-2 consists of RNA which is a negatively charged molecule enveloped inside a capsid which is a positively charged counterpart which firmly holds the viral genetic material [13,14,15]. Interestingly, novel polybasic (arginine rich) motifs have been recognized in the spike protein of the virus [16]. These motifs are a very important element in imparting a positive zeta potential at the physiological pH, and represent a unique characteristic compared to the previously known SARS-related sequences [17]. These motifs together with host proteases were proven as key players during the process of SARS-CoV-2 virus entry to host cells [17,18].
The measured particle size of the virus was recently reported to range from 70 to 90 nm [19]. Accordingly, the particle size range of the virus implies that it should be considered as a colloidal, or more specifically, a nanoparticulate system [20]. Therefore, similar to all the colloidal particles, it should possess a zeta-potential [21]. This potential was proven to be a positive one, mainly due to the virus capsid as previously discussed [8].
In this context, nature will never stop providing us with a plethora of weapons and magical solutions to the vast numbers of the encountered diseases [22,23,24,25]. Comprising almost 70% of our planet, the oceans and seas and even the bacteria could be an infinite mine of bioactives and therapeutics [26].
In this article, we introduce an idea of exploiting the electroceutical properties of a marine-derived compound, namely, Ԑ-poly-l-lysine; being positively charged [27], prepared in a nanofibrous form, in repelling the SARS-CoV-2 virus by positive–positive electrostatic interaction owing to the positively charged capsid of the virus and its newly discovered arginine motif, and hence decreasing its inhaled viral load. Moreover, we propose the incorporation of these electroceutical nanofibers as a colloidal dispersion in a nasal spray and in a toothpaste formulation, and hence uniting the electroceutical properties of the administered bioactive polypeptide with a cosmeceutical purpose.
The choice of these conventional dosage forms, such as the nasal spray and toothpaste, mainly aims to increase the feasibility of its mass production and secondly facilitate its routine usage by consumers. It is worth noting that other formulations such as a mouth wash can also be used but for the oral cavity, however we preferred to propose a more viscous preparation that has more residence time and effect in the oral cavity such as toothpaste.
The produced nanofibers can be incorporated into different formulations and administered through several routes of delivery.

Ԑ-Poly-l-lysine is a cationic, naturally occurring polypeptide that was reported to be produced by a marine Bacillus subtilis species. It is a homo-polyamide that is conjugated by the peptide bond between the carboxylic acid group and the epsilon amino group of the neighboring lysine molecules [28]. This species was previously isolated from the Mediterranean Sea water of Alexandria and characterized using the 16S rDNA sequence analysis technique. At the industrial level, it is also produced by the fermentation of Streptomyces albulus strains after mutation to be used as a food preservative. This compound is a generally regarded as safe (GRAS), one which is a naturally-driven polypeptide consisting of l-lysine repeated units (number of units = 25–30) characterized by being biodegradable, biocompatible, hydrophilic, nontoxic, and safe to be taken [29]. Being hydrophilic makes this polymer a very good candidate to be easily incorporated in many preparations and used in the mouth and the nose. The antimicrobial properties of epsilon-poly-l-lysine are well recognized in the drug and food industry [30]. Recently, its biomedicine applications are being exploited such as in dental applications, as composites, teeth adhesives, implants and antibacterials [31]. Recently, it was also proven that its mannose functionalized glycoconjugates could efficiently inhibit the cell-attachment of the viral glycoproteins of SARS-CoV-2 and other viruses as well [32]. Furthermore, the cationic nature of this molecule facilitates its electrostatic interaction with mucin and render it a muco-adhesive material with a sustained residence time in the mucus areas such as the nose and the mouth and thus sustain its viral repulsion effect [33].

Compared to the other colloidal particles, nanofibers are light in their weight associated with small diameters in the nano size, controllable network voids and entanglements [34,35]. Moreover, they possess a high surface-to-volume ratio. These unique characteristics render these structures suitable for covering larger surface areas and providing a good line of protection against pathogens [36]. Poly-l-lysine nanofibers were previously used to create tunable tissue engineering materials and wound dressings with antimicrobial functionality [37]. The potentiated antimicrobial activity of electrospun Ԑ-poly-l-lysine functionalized-nanofibers, in particular, was proven against Gram positive and Gram negative bacteria S. aureus and E. coli, respectively [38]. The mechanisms of action included membrane disruption and the release of reactive oxygen species upon the internalization of the fibers. The effect was highly attributed to the number of the repetitive l-lysine residues [39,40]. In another aspect, a recent study dealing with poly-l-lysine-enriched matrices was introduced as a promising approach for vascular grafts. The Young’s modulus mechanical tests demonstrated comparable results to the native vessels implying the good flexibility of the polymer and its endurance to electrospinning. Moreover, the burst pressure test have shown the resistance of these matrices to high pressures and the mechanical analyses procedures has proven minimal degradation of the poly-l-lysine enriched vessels compared to the native [41].

To sum up, it can be hypothesized that the frequent usage of Ԑ-poly-l-lysine nanofibers incorporated in a toothpaste together with its formulated nasal spray can provide a first-line protection of health care workers and healthy individuals against SARS-CoV-2 infectivity and decrease their risk of inhaling high viral loads. The proposed nanofibers can be prepared by using the electrospinning technique which usually results in fibers from 50 to 500 nm in diameter. The large-scale production can be achieved through a Force spinning technology® [42,43].
Owing to their high margin of safety and biocompatibility, the proposed formulations can be utilized twice a day and for long durations of time, reaching months.
As for the toothpaste formulation, we suggest the following formulation in Table 1.
Regarding the poly-l-lysine nasal spray, we suggest the following formulation in Table 2.
Figure 1 presents a schematic summary of the proposed idea.

5. The Ideal Outcome of the Proposed Intervention

As a measurable outcome of the proposed intervention, the number of infected health care providers and patients in a specific health institute or a hospital can be counted before and after the frequent usage of the proposed formulations for a specified period of time (1 month for example) followed by the subsequent subjecting of the results to statistical analysis. Ideally, the number of the infected personnel should be reduced.

A polymeric fermentation product such as Ԑ-poly-l-lysine can provide the world with a first-line tool in combating SARS-CoV2 infections by combining its electroceutical properties with some cosmeceutical interventions in order to block or rather decrease the viral entry into the body. 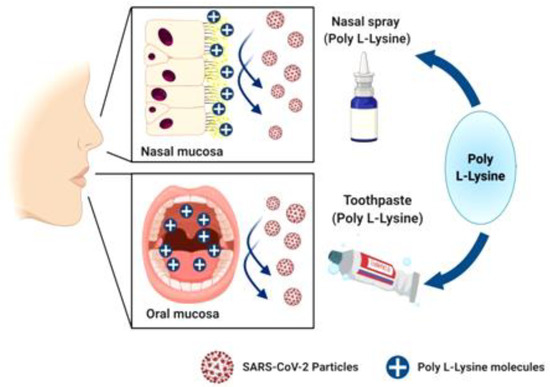 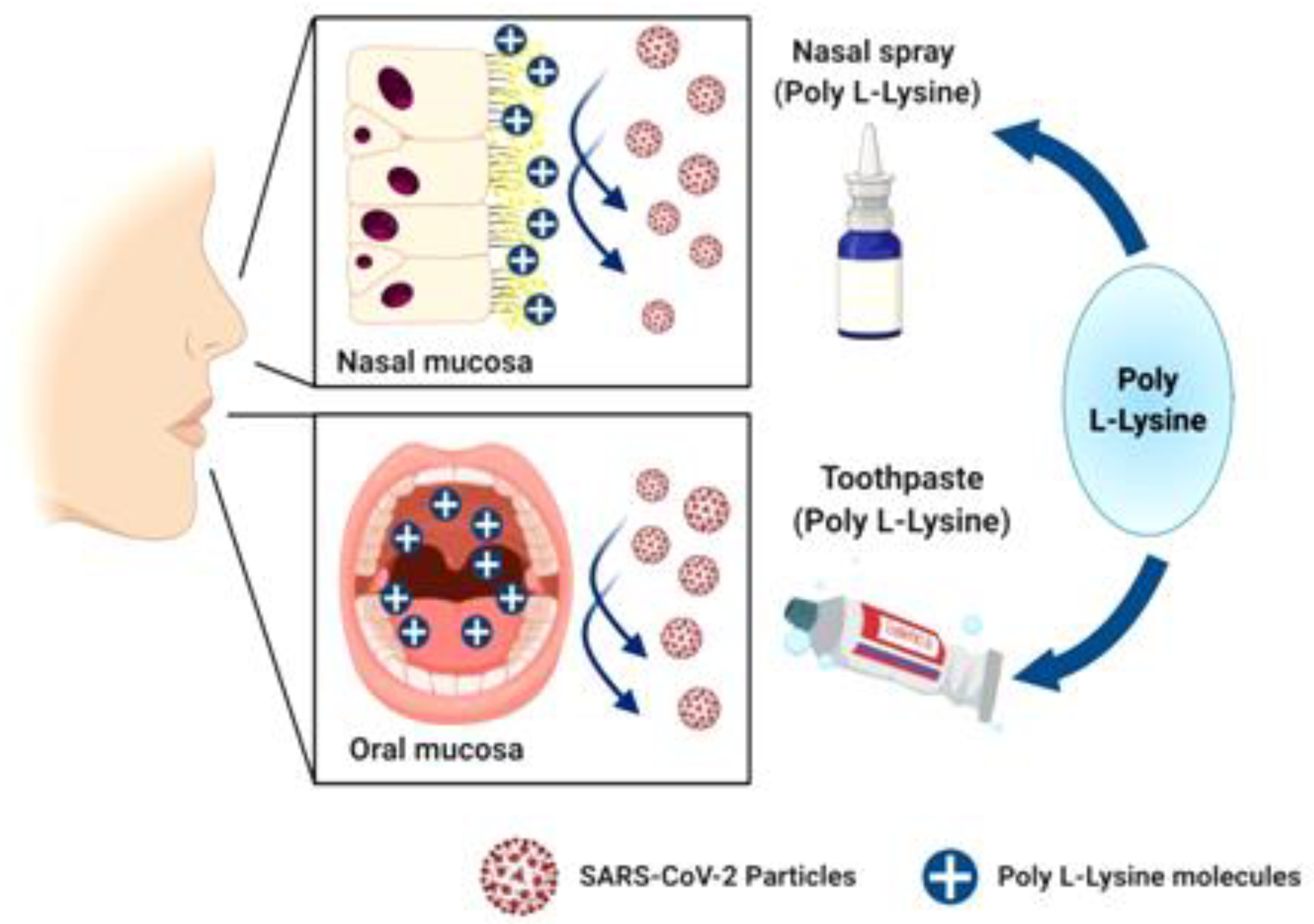