The blood-brain barrier (BBB) remains an extremely challenging hurdle to therapeutic agents targeted for the central nervous system (CNS) [1,2]. Prior attempts to bypass the BBB, and their respective disadvantages, includes: direct injection in to brain tissue (invasive), intra-arterial injection of hyperosmolar solution (toxic, requires ICU stay) [3,4], and conjugation of amino acid or other moieties to the desired molecule to use an existing BBB transport system (costly), and focused ultrasound (not widely available, limited indications) [5].
Sphenopalatine ganglion (SPG) stimulation is a novel approach to modulate BBB permeability in a targeted and transient manner [6,7,8]. The SPG is a parasympathetic ganglion found in the pterygopalatine fossa. It is largely innervated by the greater petrosal nerve (a branch of the facial nerve). Among other functions, it supplies parasympathetic innervation to the brain’s anterior vascular system, covering all the ipsilateral cerebral circulation in humans and bilaterally in rats [9]. Presently, SPG stimulation is used in humans for the treatment of cluster headaches, with trials showing safety and efficacy of an implantable microstimulator in the pterygopalatine fossa for this purpose [10,11,12].
In previous work from our lab, we have proven the ability of an established SPG stimulation protocol to transport a 70 kDa FITC-dextran molecule across the BBB with statistical significance [13]. Here, we present work that places our previous endeavors in a clinically relevant context.
Temozolomide (TMZ) is one of the most commonly used chemotherapeutic agents for primary CNS Neoplasms, particularly Glioblastoma Multiforme (GBM). It is an alkylating agent that has a molecular weight of 194 Daltons and BBB permeability of up to 20%. GBM is a grade IV brain tumor, which is the most aggressive form of CNS neoplasm, with an average life expectancy upon diagnosis of 14–18 months [14,15,16].
First-line treatment for the disease includes surgical resection, followed by radiotherapy of the surgical cavity and concurrent chemotherapy. Due to the BBB and blood-brain tumor barrier (BBTB), delivery of chemotherapeutic agents for GBM is a major challenge [16]. It results in insufficient drug delivery for achieving the necessary anti-neoplastic effect. Despite novel attempts to improve survival in GBM, no evidence-based protocol has out-performed the survival rates from the treatment paradigm presented in the Stupp et al. protocol, which is a course of surgery followed by chemotherapy with TMZ and radiation [17]. Moreover, re-occurrence rate of GBM is another issue that may be due to insufficient therapy. Many pieces of evidence suggest that current therapies are ineffective towards the prevention of re-occurrence of GBM, and there is an urgent clinical need for developing new technologies to solve this problem. Hence, advanced drug delivery approaches such as the reversible opening of the BBB under functional neurostimulation are essential to impact the survival rates in a scientifically and clinically meaningful way [2,18].

All animal experiments complied with the National Institute of Health Guidelines for the care and use of laboratory animals and were approved by the Thomas Jefferson University Institutional Animal Care and Use Committee (IACUC). All experiments were performed on female Sprague-Dawley rats, 235–245 g in weight. Prior to surgery, a 50 mg/kg solution of TMZ (Sigma Aldrich, Round Rock, TX, USA) in 0.9% normal saline solution with four units of heparin/mL was prepared. Rats were anesthetized with isoflurane and injected with 0.4 mL of subcutaneous anesthetic containing 69 mg/mL ketamine, 3.45 mg/mL xylazine, and 1.38 mg/mL acepromazine. The right internal carotid artery was exposed and cannulated via the standard approach and rats were placed in stereotactic head frame for nerve exposure [13,19,20].
A total of 20 rats were utilized. There were 10 rats in the SPG stimulation group and 10 rats in the control group, without SPG stimulation.
While in cranial fixation, the anterior ethmoidal nerve was exposed via a retroorbital approach, similar to the method described by Yarnitsky [21] and illustrated in Figure 1a,b. Orbital contents were subperiosteally dissected from the orbital wall, preserving the ethmoidal nerve and its attachments to the orbital contents and ethmoidal foramen. Next, a platinum-iridium bipolar hook electrode was placed around the nerve proximal to its entry into the ethmoidal foramen, with the cathode on the medial side of the electrode. The electrode was then attached to a pulse generator with stimulation parameters at 5V, with 1 ms duration, and 1 ms delay.
All rats received a uniform low dose (50 mg/kg) of TMZ into the right internal carotid artery and consisted of two groups: one receiving a stimulation protocol and the other serving as a control (no stimulation). SPG stimulation was performed in an intermittent fashion, based on previously published data and work from our lab [13,22]. One stimulation cycle consisted of 90 s “on” time followed by a 60 s “off” time. Stimulated rats were subjected to six cycles of priming stimulation, followed by an additional eight cycles of injecting the TMZ as a continuous infusion over 8 min (Figure 2).
Rats were taken for sacrifice via thoracotomy within 15 min following the stimulation protocol. Following thoracotomy, blood tissue samples were obtained via cardiac puncture and rats were perfused with 1 mL/kg of phosphate buffer saline (PBS). Subsequently, brain specimens were harvested and sectioned to isolate and homogenize each hemisphere.

3.1. Method Development for Quantitation of TMZ from Plasma and Brain Tissue

TMZ is a water-insoluble (partition coefficient 22.4) and caffeine is a water-soluble (partition coefficient of −0.07) in nature [23,24]. Moreover, caffeine also showed efficient elution profile in ACN with 0.1% FA. Hence, the use of the appropriate balance of aqueous- organic solvent ratio and column chemistries can certainly help in providing an appropriate resolution on HPLC column and their detection in positive ion mode of mass spectrometry. Our preliminary runs show that a ratio of 30:70 water 0.1% FA: ACN 0.1% FA with C18 column provides appropriate chromatography separations for TMZ and caffeine, as shown in Figure 3a–c.
Plasma simultaneously spiked with TMZ and caffeine shows the efficient separations mentioned before, as shown in Figure 4a–c. Concentration ranges from 10 ng/mL to 2000 ng/mL and 20 ng/mL to 2000 ng/mL for TMZ spiked in plasma and brain tissue, respectively, were used for plotting the calibration curve (concentration. v/s area). This curve resulted in the regression equations of y = 5176.4x (r2 ≥ 0.99) and y = 5891.8x (r2 ≥ 0.99) for TMZ in plasma and brain, respectively. Table 1 and Table 2 show the percentage coefficient of variation (%CV) for TMZ in calibration concentration ranges from plasma and brain matrix. Retention time (Rt) for the TMZ and caffeine was 4.56 min and 4.91 min, respectively.
The lower limit of detection (LLOD) and lower limit of quantitation (LLOQ), along with their representative extracted ion chromatograms (XIC) for both plasma and brain tissues, are shown in Figure 5. This method provided a simplest and effective quantitation TMZ by single ion monitoring (SIM) protocol as per standards set by FDA and ICH guidelines for bioanalytical method development. This simultaneous estimation method was used for the quantitative measurements TMZ in plasma and brain tissue of rats treated with TMZ under SPG stimulation vs. non-stimulation condition.

3.2. Concentrations of TMZ in Brain and Plasma and the Percentage of TMZ Crossing the BBB

3.4. Gradients of TMZ Concentration—Difference in Response to SPG Stimulation

The biggest limitation of this study is the fact that this is a healthy rat model. Additionally, the observed variability in permeability with SPG stimulation may present some limitations from patient to patient. Next logical steps would be to evaluate in a pathological state in rats with GBM. Furthermore, much remains to be learned about the exact mechanistic underpinnings of SPG stimulation.

Drug delivery to the brain for GBM therapy faces a major problem of BBB penetration. Temozolomide (TMZ) is an important drug that is commonly explored for GBM therapy. Moreover, SPG stimulation has been one of the major techniques that have played an important role in the reversible opening of BBB. In the present study, we report a simple, sensitive and reproducible LCMS method for the quantitation of TMZ in rat plasma and brain tissue. The method could detect and quantitate TMZ in nanogram concentration in both the matrix of rats in the presence of caffeine as internal standard (IS). The linearity was established with r2 ≥ 0.99 and % coefficient of variance (%CV) was found be <5% and % accuracy of nearly 100% with a variation of ±20% as per the FDA and ICH guidelines. This quantitation method was employed for checking the quantitative BBB penetration of TMZ under influence of SPG stimulation. The present investigation showed significant penetration of TMZ through BBB of rats (with p < 0.001, n = 10) in comparison to the unstimulated set of animals. The study also showed that right hemisphere with a higher concentration of TMZ compared to left hemisphere under-stimulation. Despite the limitation of this work, this quantitative LCMS assay demonstrated that SPG stimulation is an important drug delivery technique for TMZ that can be used for GBM therapy and potentially to deliver many other therapies to the brain.

Authors would like to thank the Mary E. Groff Foundation for funding this work. 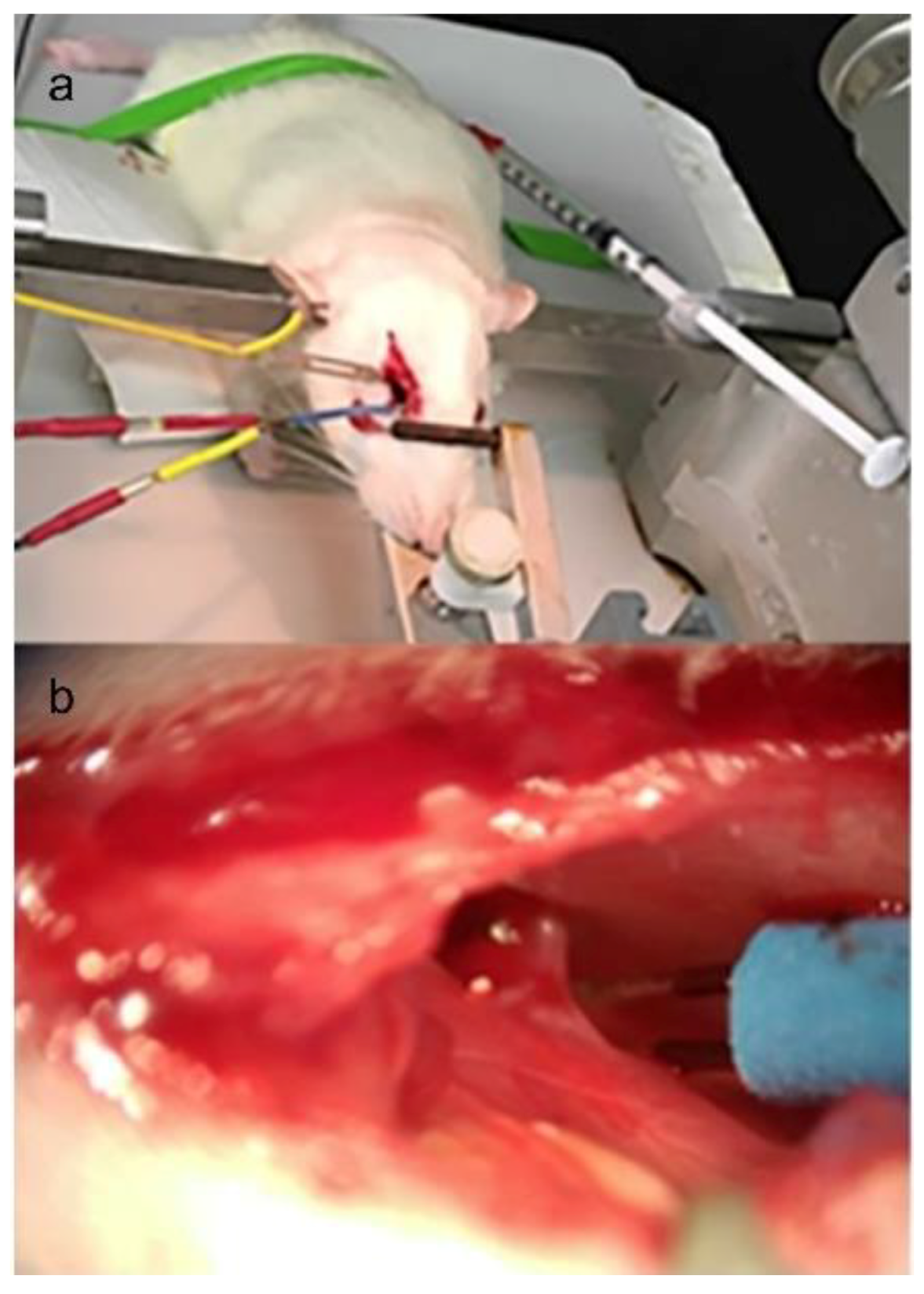 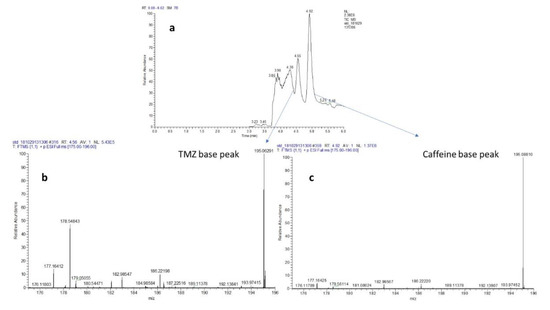 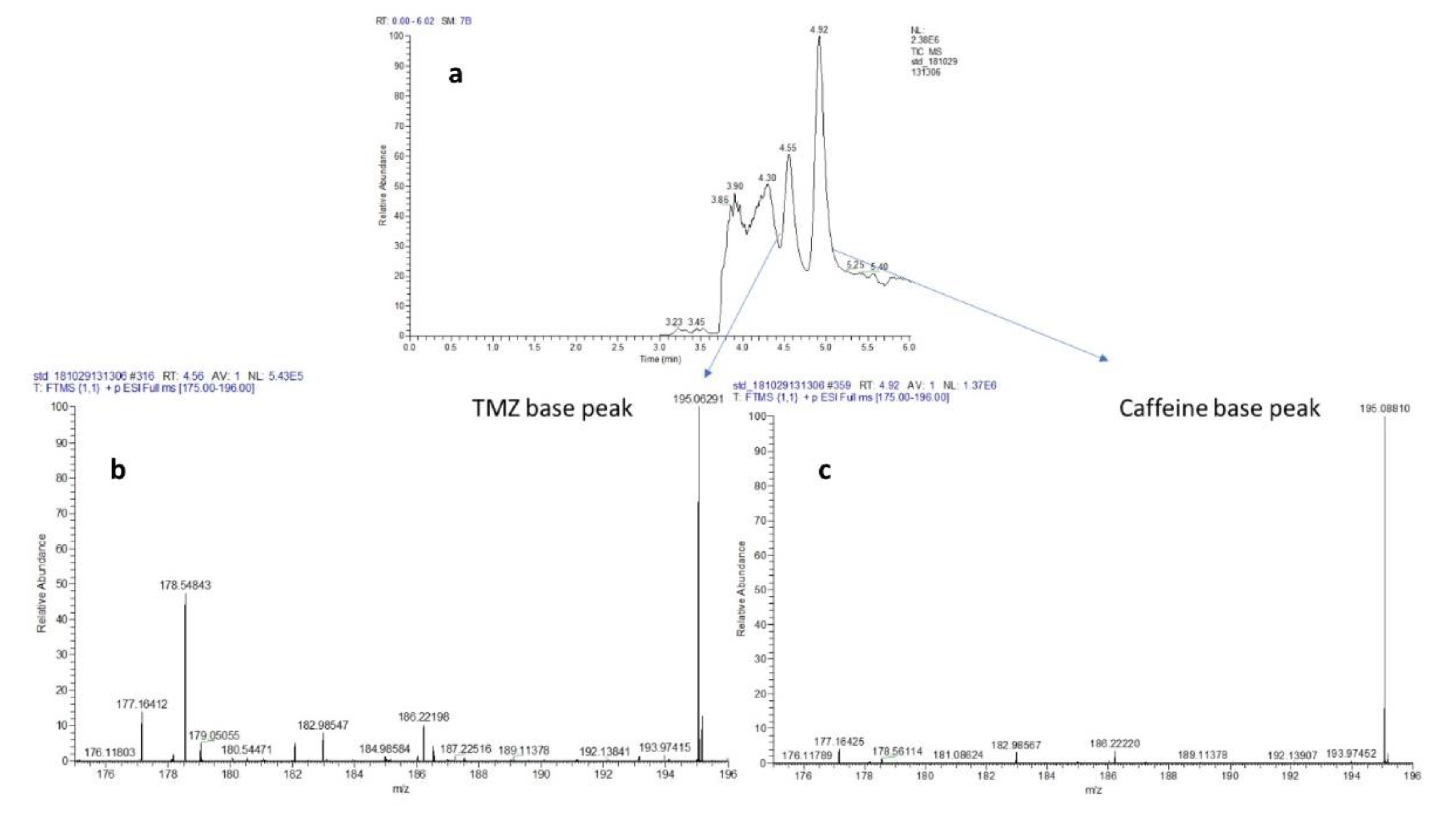 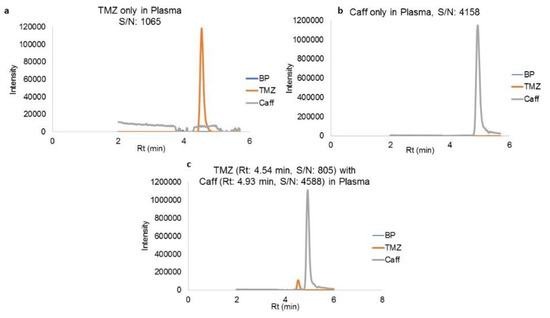 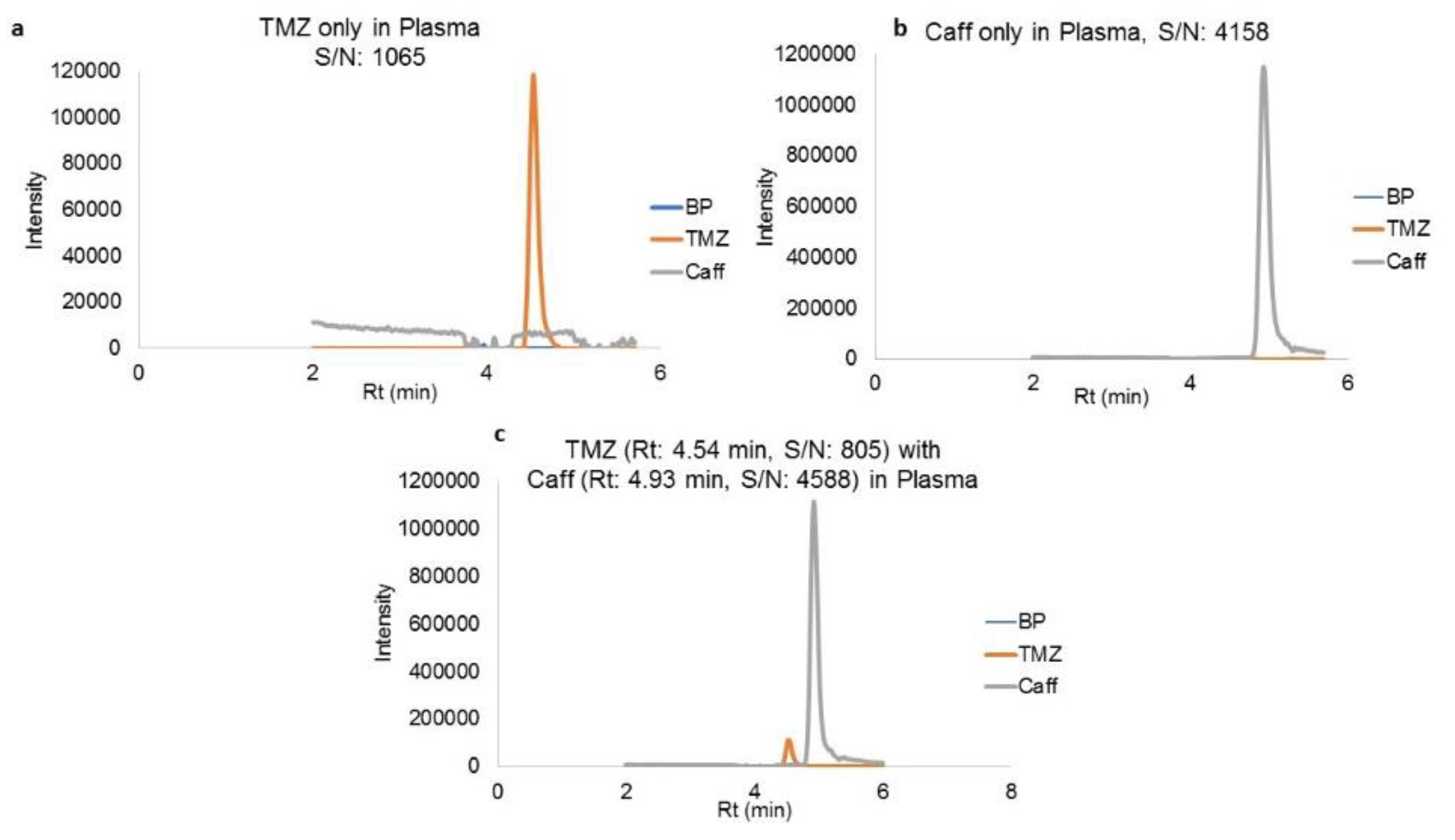 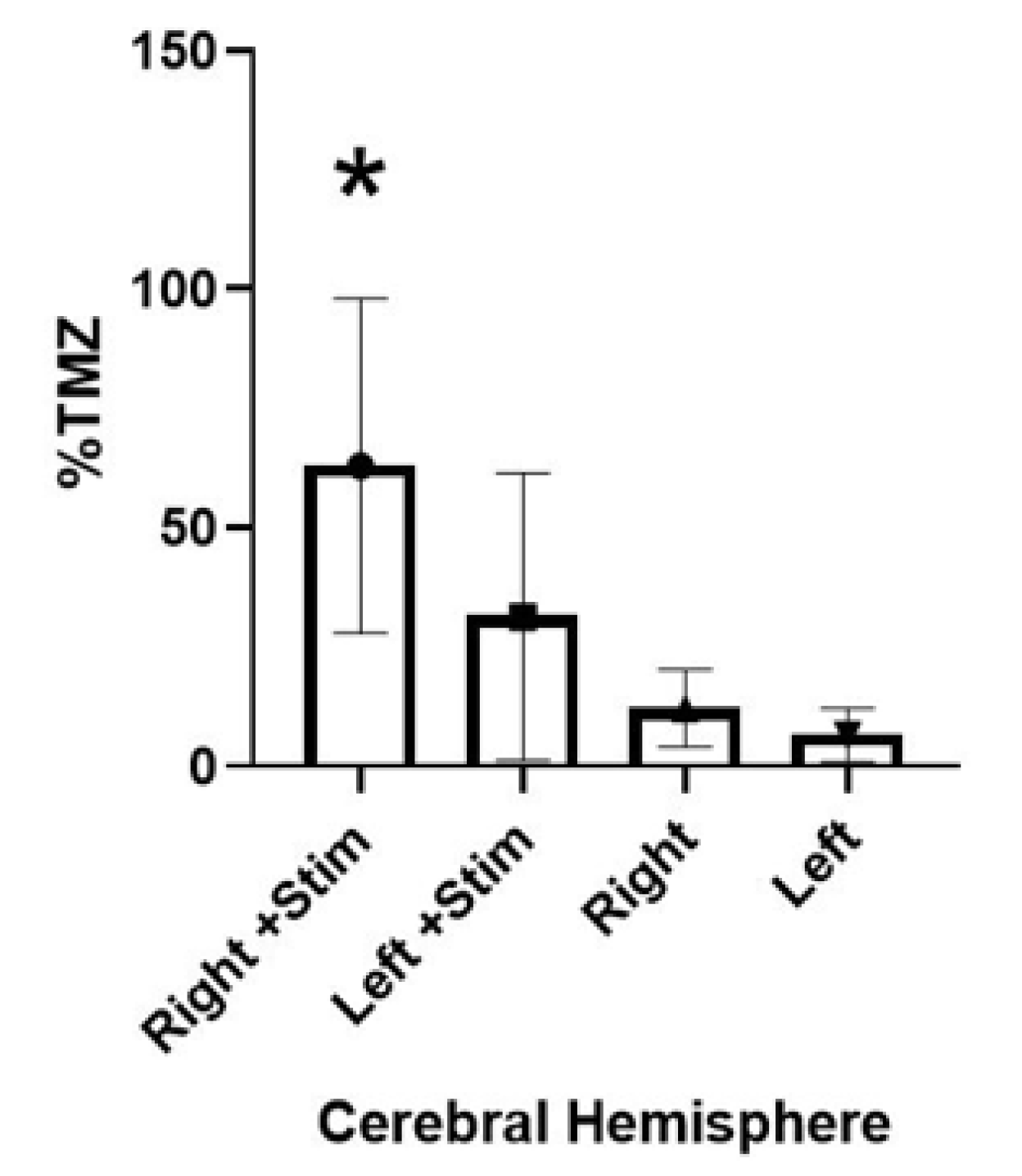