Antileishmanial Activity and Influence on Mitochondria of the Essential Oil from Tagetes lucida Cav. and Its Main Component

Current antileishmanial drugs are toxic, expensive, and resistance to them has emerged. Several studies have focused on natural products as alternatives. In the present work, the chemical composition, in vitro antileishmanial activity, cytotoxicity effects, and the influence on mitochondrial function of the essential oil from Tagetes lucida Cav. was determined, as well its main compound estragole. Forty-nine compounds were detected in the oil by gas chromatography-mass spectrometry (GC-MS), of which estragole was the main constituent (97%). The oil showed inhibition of the promastigotes of L. tarentolae and L. amazonensis (IC50 = 61.4 and 118.8 µg/mL, respectively), decreased oxygen consumption of L. tarentolae, disrupted mitochondrial membrane potential in L. amazonensis, inhibitory activity on the intracellular amastigote of L. amazonensis (IC50 = 14.2 ± 1.6 µg/mL), and cytotoxicity values ranging from 80.8 to 156 µg/mL against murine macrophages and J774 cells. Estragole displayed higher activity on promastigotes (IC50 = 28.5 and 25.5 µg/mL, respectively), amastigotes (IC50 = 1.4 ± 0.1 µg/mL), and cytotoxicity values ranging from 20.6 to 14.5 µg/mL, respectively, while on mitochondria, it caused a decrease of the membrane potential but did not inhibit oxygen consumption. The potential antileishmanial activity of the essential oil from T. lucida and estragole makes these compounds favorable candidates for exploration in further studies.
Keywords: Leishmania; Tagetes lucida; essential oil; estragole; mitochondria Leishmania; Tagetes lucida; essential oil; estragole; mitochondria

The intracellular protozoan parasites of the genus Leishmania are the causative agents of leishmaniasis, a vector-borne disease of major public health concern in tropical and subtropical regions. Approximately, 0.7–1 million new cases of leishmaniasis occur per year and 12 million infected people worldwide are reported from nearly 100 endemic countries. The clinical manifestations of leishmaniasis are highly variable with two main clinical forms—cutaneous leishmaniasis and visceral leishmaniasis, which range from self-healing localized cutaneous lesions to life-threatening disseminated visceral disease [1,2].
So far, the development of an effective Leishmania vaccine for humans with effective immune protection has not yet been achieved [3]. As alternatives to combat the disease progression, there are several known antileishmanial chemotherapeutic drugs, such as derivatives of pentavalent antimonials, amphotericin B, pentamidine, paromomycin, and miltefosine. However, several drawbacks during the treatment regimen have been observed, including toxic effects, prolonged administration, parasite resistance, and high costs [4]. Additionally, leishmaniasis is considered to be a “Neglected Tropical Disease” and current treatment regimens are often too expensive or unavailable in developing countries where the disease is prevalent. In this context, there is an urgent demand to accelerate the development of more effective treatment options against leishmaniasis and plant-based treatment options, such as essential oils, should be further explored.
In particular, several plants from the Asteraceae family have provided some lead compounds against Leishmania spp. [5,6]. Specifically, Tagetes lucida Cav. is a perennial plant native to Central America. It is used as a culinary herb and some pharmacological therapeutic effects have been reported, including tranquilizing properties [7], antidepressant activity [8], and analgesic activity [9]. However, to our knowledge, the antileishmanial effect of this plant has not been studied. Therefore, the aim of the present study was to determine the chemical composition, in vitro antileishmanial activity, cytotoxicity effects, and influence on mitochondrial function of the essential oil (EO) from the leaves of T. lucida. In addition, the antileishmanial potential of the main compound estragole was also studied (the Materials and Methods are available as Supplementary Materials).

This research was funded by Austrian Science Fund (FWF), grant number P 27814-B22, and the Ernst Mach scholarship award to Lianet Monzote by the Austrian Exchange Office (OEAD).

This work was carried out in collaboration as members of the Research Network Natural Products against Neglected Diseases (ResNetNPND, http://www.resnetnpnd.org/Start/) and contribution of the project Aromatic Plant Research Center (APRC, https://aromaticplant.org/). 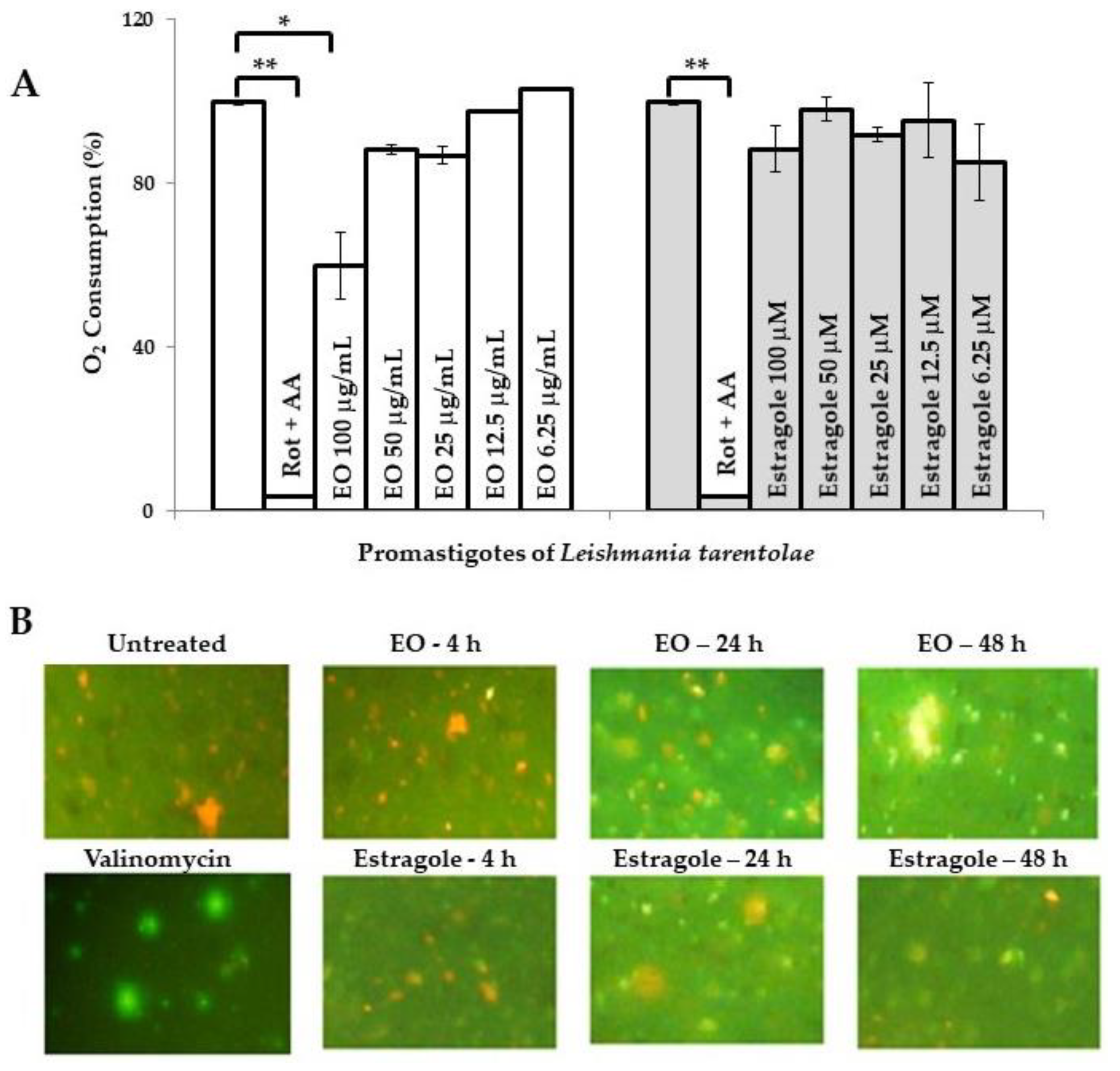