Saad A. Hussain 2 and

Objective: This study evaluated the effect of melatonin on the response of patients suffering from metabolic syndrome (MEBS) treated with metformin. Design: This study used two-armed groups in a double-blind, randomized controlled clinical trial. Materials and Methods: A randomized double-blind placebo-controlled study was carried out on female patients diagnosed as having MEBS, according to the International Diabetes Federation (IDF) diagnosing criteria of MEBS (2005), from the outpatient clinic in Al-Zahraa Teaching Hospital/Kut, Iraq. They were diagnosed utilizing laboratory and clinical investigations, then randomized into two groups. The first group (group A) was treated with metformin (500 mg) twice daily, in addition to a placebo formula once daily at bedtime for three months. The second group (group B) was treated with metformin (500 mg) twice daily after meals, in addition to melatonin (10 mg) once daily at bedtime for three months. Results: The treatment of patients with MEBS using metformin–melatonin showed an improvement in most MEBS components such as fasting serum glucose (FSG), lipid profile, and body mass index (BMI), in addition to a reduction in insulin resistance and hyperinsulinemia. Simultaneously, there were increments in serum uric acid (UA), leptin, prolactin (PRL), and estradiol levels, while serum progesterone level decreased. Furthermore, patients treated with metformin–placebo showed less improvement in the studied parameters compared to that produced due to the inclusion of melatonin in the treatment protocol. Conclusion: Melatonin improves the effect of metformin on several components of MEBS such as FSG, lipid profile, and BMI, in addition to insulin resistance and hyperinsulinemia, compared to metformin alone.
Keywords: melatonin; metformin; metabolic syndrome melatonin; metformin; metabolic syndrome

Metabolic syndrome (MEBS) refers to the clustering of several cardiometabolic risk factors, including abdominal obesity, hyperglycemia, dyslipidemia, and elevated blood pressure (BP), which are linked to insulin resistance [1]. MEBS is highly prevalent and is a risk factor for cardiovascular disease (CVD), chronic kidney disease (CKD), and type II diabetes [2]. This constellation of risk factors increases the risk of diabetes by 5–9-fold and cardiovascular mortality by 2–3-fold [3]. Insulin resistance is the essential cause of MEBS [4], and it usually presents with MEBS, while it is strongly associated with other metabolic risk factors and correlates univariately with CVD risk [5]. There is a significant relationship between melatonin and insulin levels in patients with MEBS, as well as between the melatonin-insulin ratio and the lipid profile, as recently documented. Consequently, pineal disorders may be involved in prediabetes and MEBS pathogenesis, or, at a minimum, they may impact its “phenotype expression” and the intensity of its complications [6]. Metformin is primarily helpful in obese persons with type II diabetes, a condition generally marked by insulin resistance [7]. It is also increasingly being used to treat other conditions associated with insulin resistance, especially polycystic ovary syndrome (PCOS) [8]. Melatonin (5-methoxy-N-acetyltryptamine) is a ubiquitous molecule which is widely distributed. It was recognized across all main classes of organism, comprising bacteria, single-cell eukaryotes, and algae, as well as in various plant parts (like seeds, flowers, stems, and roots), and vertebrate species. In vertebrates, melatonin is mainly produced and discharged by the pineal gland [9].
Some of melatonin’s effects are receptor-mediated, while others are receptor-independent. Several major actions of melatonin are mediated through the activation of membrane receptors MT1 and MT2, which belong to the super family of G-protein-coupled receptors containing the typical seven transmembrane domains [9]. In mammals, melatonin has a crucial role in body mass regulation and energy expenditure [10].
Intracellular cross-talk between melatonin and insulin signaling may have a role in the intracellular mechanism controlling body weight, feeding behavior, and blood glucose circadian rhythms [10]. Insulin receptor substrates display distinct patterns of expression in the hypothalamus, pituitary gland, and olfactory bulb. Insulin’s function in the hypothalamus is to inhibit feeding behavior. Melatonin encourages the activation of the insulin receptor β-subunit tyrosine kinase and fast MT1/MT2 membrane receptor-dependent tyrosine phosphorylation [11].
In addition, melatonin induces insulin receptor substrate 1 (IRS-1)/phosphatidylinositol (PI) (3) kinase and IRS-1/Src homology region 2 domain-containing phosphatase-2 (SHP-2) associations, as well as downstream protein kinase B (Akt) serine phosphorylation and P42 mitogen-activated protein kinase (MAPK) phosphorylation [12]. We suggest that IRS-1 phosphorylation may play a role as a converging target in insulin- and melatonin-stimulated signaling pathways, as well as a probable link for both hormones in the control of body weight and carbohydrate metabolism. The implication of an intracellular interaction between melatonin and insulin signaling systems is interesting. Melatonin is involved in the neuronal mechanism regulating circadian rhythms related to glucose blood level through its effects on MT1 and MT2 receptors [13].

A randomized double-blind placebo-controlled study was enrolled on 45 female patients diagnosed as having MEBS, according to the International Diabetes Federation (IDF) diagnosing criteria of MEBS (2005) [14], from the outpatient clinic in Al-Zahraa General Hospital/Kut between May 2019 and October 2019. They were diagnosed utilizing laboratory and clinical investigations. No subjects had a history of the following conditions: neurologic or psychiatric illness; allergy to melatonin or metformin; gastrointestinal motility disorder; renal or hepatic insufficiency. Patents were randomly assigned to two groups. Group A (age range: 36–66 (48.07 ± 7.43) years) was treated with metformin (500 mg twice daily), in addition to a placebo formula containing lactose in capsule dosage form for three months. Group B (age range: 27–55 (45.80 ± 6.53) years) was treated with metformin (500 mg twice daily) after meals, in addition to melatonin (10 mg in a capsule dosage form) once daily at bedtime for three months. Neither healthcare providers (physicians and nurses) nor participants were aware of the time of received medications because a third party blinded the capsule containing unlabeled medication (identified using coded numbers); thus, the medications were undisclosed to both healthcare providers and participants (patients). During the study, the patients did not modify their daily caloric intake or their physical exercise pattern. During the period of treatment, fasting serum glucose (FSG), UA, and lipid profile were evaluated before starting treatment, as well as every 30 days throughout the study. Additionally, waist circumference, body mass index (BMI), fasting serum insulin, insulin resistance index (homeostatic model assessment (HOMA) index), leptin, prolactin (PRL), estradiol, and progesterone levels were evaluated before starting treatment, as well as after 90 days of treatment.

All data were statistically analyzed using paired Student’s t-test and analysis of variance (ANOVA) to test the significant differences regarding baseline. Unpaired t-test was used to compare the difference between different groups (EXCEL, MICROSOFT OFFICE XP). p values equal or less than 0.05 was considered significantly different.

Approval of study procedures was obtained from Ethical Committee of the Pharmacy College, Al Farahidi University under the number of 1086 in 4/3/2019.The consent was obtained from all patients after explaining the risk and benefits of the study in their own language.

Forty-five patients were randomly assigned to A or B treatment groups. Five patients (n = 2 from group A; n = 3 from group B) were withdrawn due to a history of renal disease (n = 3) and metformin hypersensitivity (n = 2). The study was performed on 40 patients. Four of these in group A declined to participate within the first 10 days. One patient in group A became pregnant, so, was excluded. Therefore, 35 patients participated in the study: 15 patients in group A were treated with metformin (500 mg twice daily) in addition to the placebo formula at bet time, and 20 patients in group B were treated with metformin (500 mg twice daily) in addition to melatonin (10 mg once daily) at bedtime. In both groups, treatment was continued for three months (Figure 1). All laboratory tests were carried out in the central laboratory of Al-Zahraa Teaching Hospital.

3.1. Effect of Treatment with Metformin-Melatonin Versus Metformin-Placebo on Fasting Serum Glucose Level in MEBS Patients

3.2. Effect of Treatment with Metformin-Melatonin Versus Metformin-Placebo on the Insulin Level and Insulin Resistance Based on the HOMA Index in MEBS Patients

3.3. Effect of Treatment with Metformin-Melatonin Versus Metformin-Placebo on the Serum Leptin Level in MEBS Patients

Table 3 shows a slight but insignificant elevation (10.02%) (p = 0.067) in the serum leptin level after 90 days for the group treated with a combination of metformin-placebo with respect to pretreatment level. In contrast, patients treated with a combination of metformin-melatonin revealed slightly lower and insignificant (7.74%) (p = 0.071) elevation after the same period of treatment. However, the difference in serum leptin levels between the two treated groups was found to be insignificant (p = 0.09) as shown in Figure 2.

3.5. Effect of Treatment with Metformi-Melatonin Versus Metformin-Placebo on Serum Uric Acid Level in MEBS Patients

3.6. Effect of Treatment with Metformin-Melatonin Versus Metformin-Placebo on Serum Levels of Estrogen, Progesterone, and Prolactin in MEBS Patients

The data presented in Table 6 show that treatment of MEBS patients with the metformin-melatonin combination resulted in a significant elevation (12.5% (p = 0.04)) in the serum estradiol level after 90 days. However, the effect was comparable and does not significantly differ with what observed during treatment with metformin–placebo at the same period (11.12% (p = 0.33)), as shown in Figure 5.
Concerning the effect on serum progesterone levels, Table 6 shows a viable reduction (12.5% (p = 0.029)) in this hormone after 90 days in the metformin-melatonin group; but this effect was nonsignificant (4.92% (p = 0.34)) when compared with metformin-placebo group at the same period, as shown in Figure 5.
Table 6 showed a significant elevation (20.89% (p = 0.044)) in the serum PRL level after 90 days in the metformin–melatonin group. On the other hand, the metformin-placebo produced a significant reduction (38.74% (p = 0.027)) in the serum PRL level after the same period. Upon statistical analysis, the difference was significant between the two groups (p < 0.05), as shown in Figure 5.

3.7. Effect of Treatment with Metformin-Melatonin Versus Metformin-Placebo on the BMI and Waist Circumference in MEBS Patients

Melatonin improves the effect of metformin on several components of MEBS such as FSG, lipid profile, BMI, insulin resistance and hyperinsulinemia when compared to metformin alone. Pharmacological doses of melatonin may produce an additive effect to metformin when utilized long-term in patients with MEBS, leading to possibility of reducing the dose of metformin and subsequently decreasing its side effects. 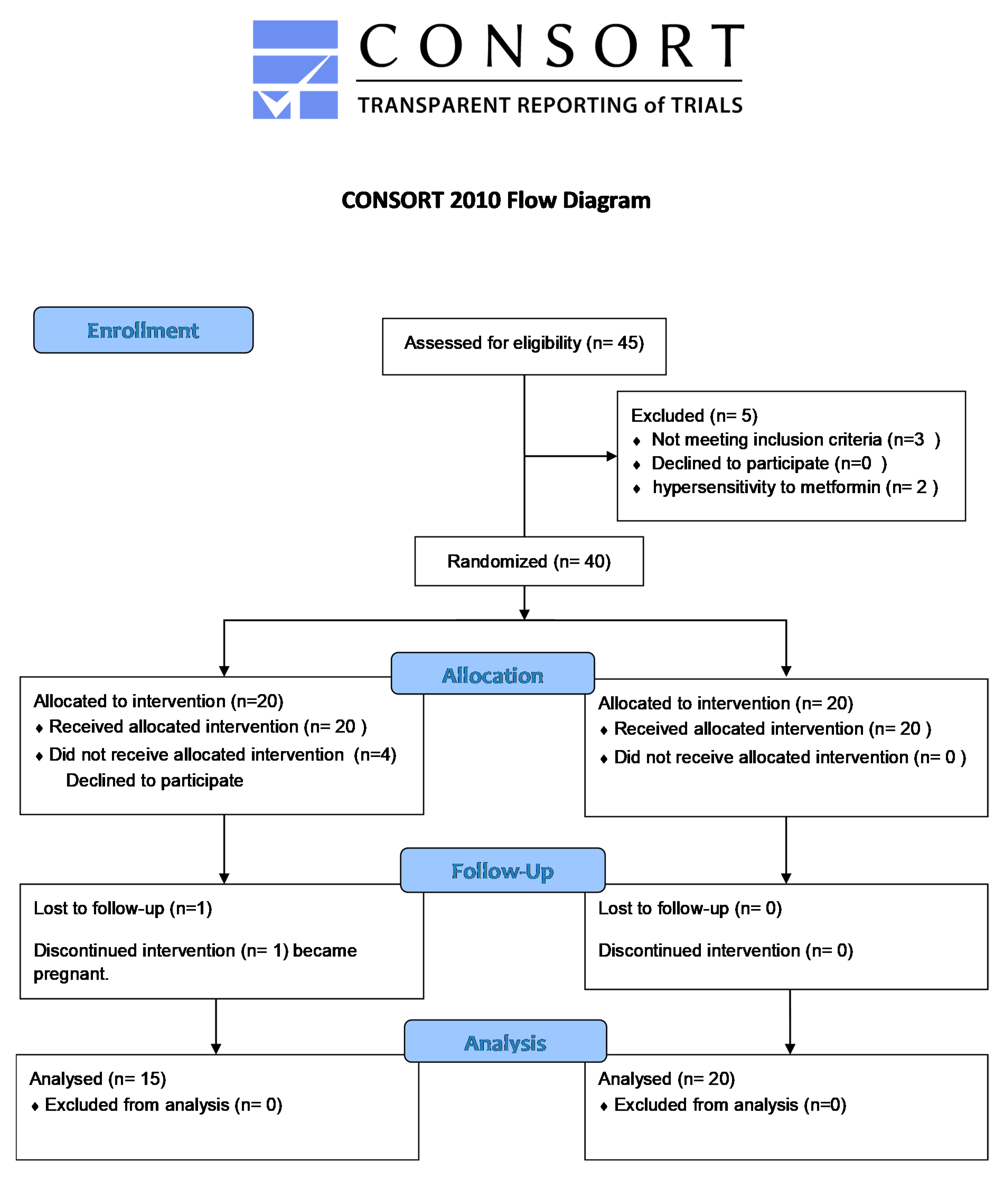 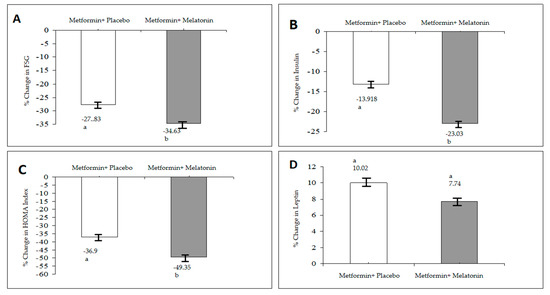 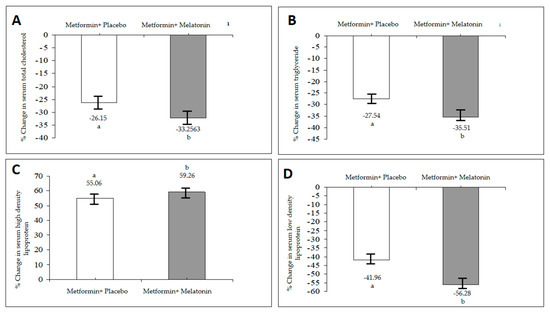 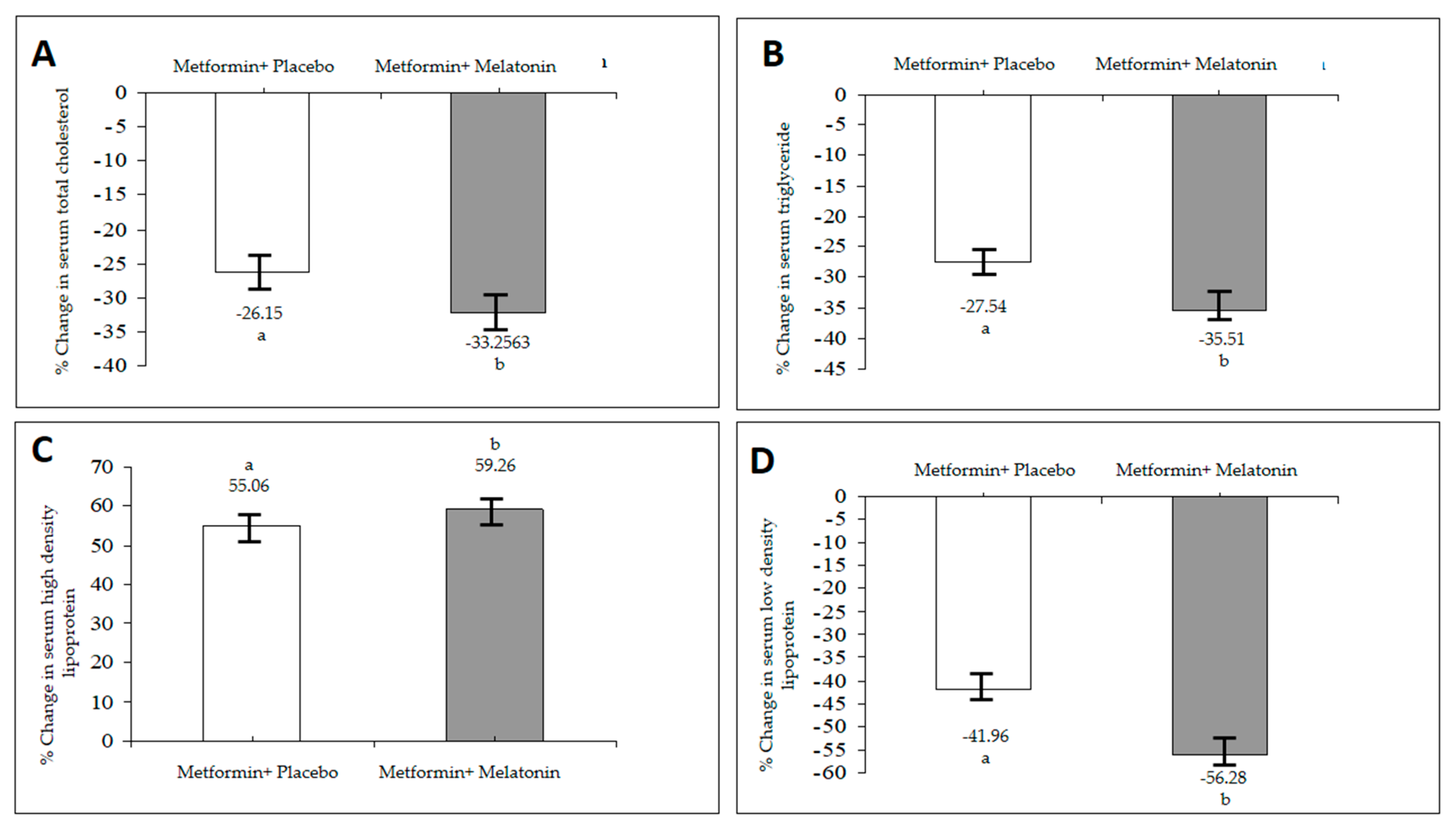