Saad A. Hussain
2 and

Objective: This study evaluated the effect of melatonin on the response of patients suffering from metabolic syndrome (MEBS) treated with metformin. Design: This study used two-armed groups in a double-blind, randomized controlled clinical trial. Materials and Methods: A randomized double-blind placebo-controlled study was carried out on female patients diagnosed as having MEBS, according to the International Diabetes Federation (IDF) diagnosing criteria of MEBS (2005), from the outpatient clinic in Al-Zahraa Teaching Hospital/Kut, Iraq. They were diagnosed utilizing laboratory and clinical investigations, then randomized into two groups. The first group (group A) was treated with metformin (500 mg) twice daily, in addition to a placebo formula once daily at bedtime for three months. The second group (group B) was treated with metformin (500 mg) twice daily after meals, in addition to melatonin (10 mg) once daily at bedtime for three months. Results: The treatment of patients with MEBS using metformin–melatonin showed an improvement in most MEBS components such as fasting serum glucose (FSG), lipid profile, and body mass index (BMI), in addition to a reduction in insulin resistance and hyperinsulinemia. Simultaneously, there were increments in serum uric acid (UA), leptin, prolactin (PRL), and estradiol levels, while serum progesterone level decreased. Furthermore, patients treated with metformin–placebo showed less improvement in the studied parameters compared to that produced due to the inclusion of melatonin in the treatment protocol. Conclusion: Melatonin improves the effect of metformin on several components of MEBS such as FSG, lipid profile, and BMI, in addition to insulin resistance and hyperinsulinemia, compared to metformin alone. View Full-Text
Keywords: melatonin; metformin; metabolic syndrome melatonin; metformin; metabolic syndrome
►▼ Show Figures 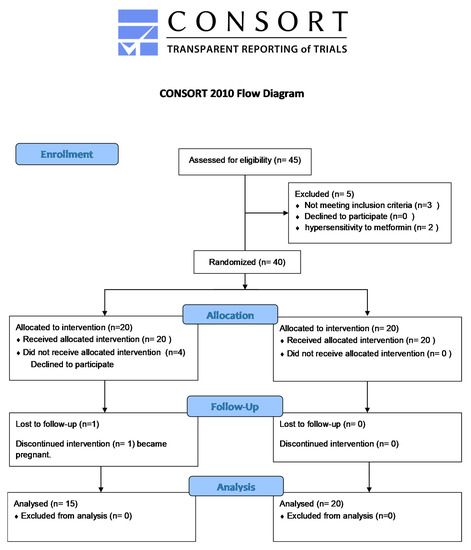