Pharmacies for the Pharmacists—Ukrainian Fears and Polish Experiences

Nowadays, a number of questions about evidence-based phytotherapy are under discussion [1,2,3,4]. The main way to give scientific explanation to the pharmacological effects of natural pharmaceuticals is through the standardization of plant raw material and the recognition of the role of certain biologically active substances or their groups for pharmacological action. In accordance with modern concepts about the contribution of plant constituents to pharmacological activity, amino acids, as minor components, are very important for different kinds of action [5,6,7]. Sometimes, the presence/absence of certain amino acids is the key factor influencing the central nervous system, thyroid gland, etc. [8,9].
Various plant species of the Iridaceae family are known for their magnificent decorative flowers as they are widely cultivated and wild-growing in Europe countries. At the same time, some Iridaceae plants are also known to be widely used as food, condiments or as medicinal plants [10,11,12]. Thus a high pharmacoligical potential was discovered for extracts and active constituents of plants from genes Crocus, Iris, Gladiolus and Juno [13,14,15,16,17]. Anti-inflammatory, phytoestrogenic, antidiabetic, hepatoprotective, hypolipidemic [10,11,12], antioxidant [13,14,17,18], antimicrobial [16,18] and anticancer [19,20] activities are described for some plants of these genes. C. sativus stigma [21], petal, stamen, and flower [22] extracts show good antioxidant activity in vitro antioxidant models due to the presence of carotenoids crocins and phenolic compounds (derivatives of kempferol and quercetin). Extracts of C. sativus leaves showed higher antioxidant activity than petals [15]. Iris species are characterized by a high content of xanthon mangiferin and different flavonoids and isoflavones (apigenin, kampferol, quercetin, vitexin, tectoridin, nigricin and its glucosides), which determine the presence of antioxidant [13,14,23] and antiviral activity [24]. Isoflavones and their glycosides isolated from rhizomes of I. kashmiriana [25] and I. germanica [19], as well as the extracts of I. pseudopumila and I. florentina, have been reported [10] to have cytotoxic properties. Phytochemical investigations showed that in these plants there is the presence of isoflavones [10,11,19], flavones [10,11,13,16,22], xanthones [10,14], quinones, peltogynoids and stilbenes [10,13], fatty acids [15], carotenoids [11,12,20], triterpenes, iridals [10,26]. However, the composition of the amino acids of these plants materials belongs to this family has not been studied much [27,28].
Separation and quantification of amino acids in a complex matrix such as herb material is a difficult task due to their high polarity with low volatilization and no chromophore groups. Furthermore, different techniques were developed and validated for their identification and quantification. Indirect methods are more popular and widely used. They include pre- or post-column derivatization with various reagents, for instance ninhydrin, ortho-phthalaldehyd (OPA) [29,30], phenyl isothiocyanate (PITC) [31], 2,4-dinitrofluorobenzene (DNFB), dimethylaminoazobenzene sulfonyl chloride (Dabsyl-Cl), 9-fluorenylmethyloxycarbonyl chloride (FMOC-Cl) [32], 9-fluorenylmethoxycarbonyl glycine chloride, and 6-aminoquinolyl-N-hydroxysuccinimidyl carbamate [33]. On other hand, direct methods are easier to apply and require no reagent. For instance, capillary electrophoresis equipped with an ultraviolet detector [34]—as well as a recently a new method of amino acids analysis—has been performed using UPLC-HILIC MS/MS method [35]. Furthermore, GC/MS is a promising method for the analysis of a wide range of amino acids due to remarkable chromatographic resolution combined with reproducible MS detection [36]. Some research [37,38] provides data on how the precision of quantification in analysis utilizing LC–MS can be compromised due to changes of ionization efficiency caused by matrix effects and the co-elution of metabolites. Such data hold true despite the presence of isotope-labeled internal standards, indicating a significant limitation to the development of quantitative untargeted LC/MS methods. LC methods are accurate enough and reliable but not eco-friendly. Furthermore, GC/MS provides the high sensitivity of the single quadrupole mass detector, reproducible ionization and fragmentation pattern of EI for a broad range of metabolite derivatives, informative mass spectra [39], as well as low maintenance cost [40,41].
In Ukrainian flora, the Iridaceae family is represented by many plants both harvested and wild-growing. Among them Crocus sativus, Juno bucharica, Gladiolus hybrid Zefir, Iris hungarica and Iris variegata are very interesting as prospective phytopharmaceuticals sources. Taking into account the possible role of amino acids as pharmacological activity, we decided to perform a comparative investigation into the content of these constituents in chosen plant raw material of Iridaceae family representatives from Ukrainian flora.

The analyses were carried out using a SHIMADZU GC-MS-QP2010. The separation of amino acids was carried out using a Rxi-5ms capillary column (30 m long, 0.25 mm outer diameter and 0.25 μm liquid-stationary phase thickness) (Restek Corporation, Bellefonte, PA) with a liquid stationary phase (5% diphenyl and 95% polysiloxane), and carrier gas helium. Oven temperature was set at 75 °C and kept for 5 min, and then increased at 10 °C/min to 290 °C, then at 20 °C/min to 320 °C and finally held at that temperature for 5 min. The injector temperature was 260 °C. The injection was made in the mode split (splitter 1:20) at 260 °C with an injection volume 1 µL. Mass spectra (70 eV, electron impact mode) scan range of m/z 35-500 amu with mass scan time of 0.2 s, interface temperature 280 °C. Flow column rate was 1.5 mL/min, pressure 100 kPa, total flow rate: 34.4 mL/min. The analytical run was in total 41 min. The content of identified amino acids is presented in Table 1.

Statistical analysis was performed via a one-way ANOVA analysis of variance followed by Tukey’s multiple comparison test by using the software package Prism v.5.04 (GraphPad Software Inc., La Jolla, CA, USA). The value of p < 0.05 was taken as the level of significance.

The GC–MS chromatograms of the test solutions established the presence of 13 amino acids and 2 additional amino acids (4-aminobutanoic and pyroglutamic acids), which were re-calculated on L-glutamic acid. Amino acids in Iridaceae plants dry extracts were identified by comparing the retention times of selected amino acids in specific MS chromatograms. Quantitative analysis was performed using calibration curves build with standards solutions. Concentration range of standards was from 0.1 to 100 ng/mL.
The elution order of amino acids standards is presented in Figure 1: alanine, valine, leucine, isoleucine, proline, metionine, serine, threonine, phenylalanine, aspartic acid, glutamic acid, lysine, tyrosine. The standards have been extracted and derivatized as previously described in the sample preparation session. Precision gave a lower value than RSD = 2%, except Arg, Cys and Tyr and sensitivity value lower than 10 ng of all amino acids injected. All standards samples followed the same extraction and derivatization steps. Additionally, two amino acids, viz. 4-aminobutanoic and L-pyroglutamic acids, were calculated via L-glutamic acid. The quantitative content of identified amino acids is presented in Table 1.

To validate the results obtained in our study, precision, repeatability, limit of detection (LOD), limit of quantification (LOQ), and linearity were calculated according to the International Conference for Harmonization (hereafter, ICH) [44]. The data obtained are presented in Table 2, Table 3 and Table 4. The method was validated using amino acid standards. The limit of detection (LOD) (signal/noise = 3) and the limit of quantification (LOQ) (signal/noise = 10) of all compounds varied within the range 0.14–0.72 ng/mL and 0.2–2.4 ng/mL respectively. The precision of the method was evaluated by measuring the peak chromatographic area of amino acids six times on the same test sample. The precision of retention times and peak areas of mixing amino acids standards for the replicated injection were in the range of 0.70–1.92% of RSD (n = 6). The reproducibility and repeatability of the method were evaluated by analysing six injections of the sample solution and two replicates of herbal sample extraction, respectively. To confirm the accuracy of the method, a recovery experiment was performed by mixed quantified samples with specific quantities of reference compounds. The average percentages of recovery of mixed amino acids standards ranged from 81.92% to 113.00%. The results demonstrated that conditions for the amino acids analysis were repeatable and accurate. 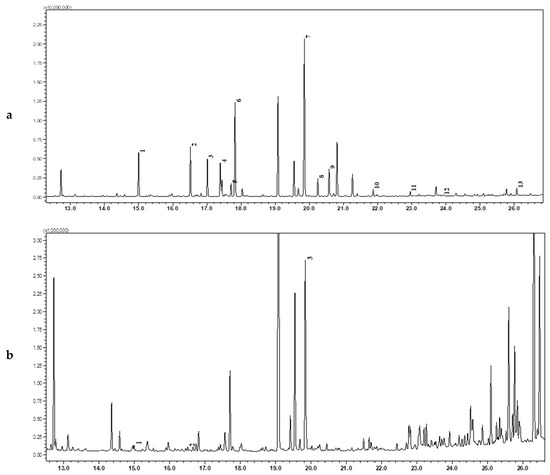 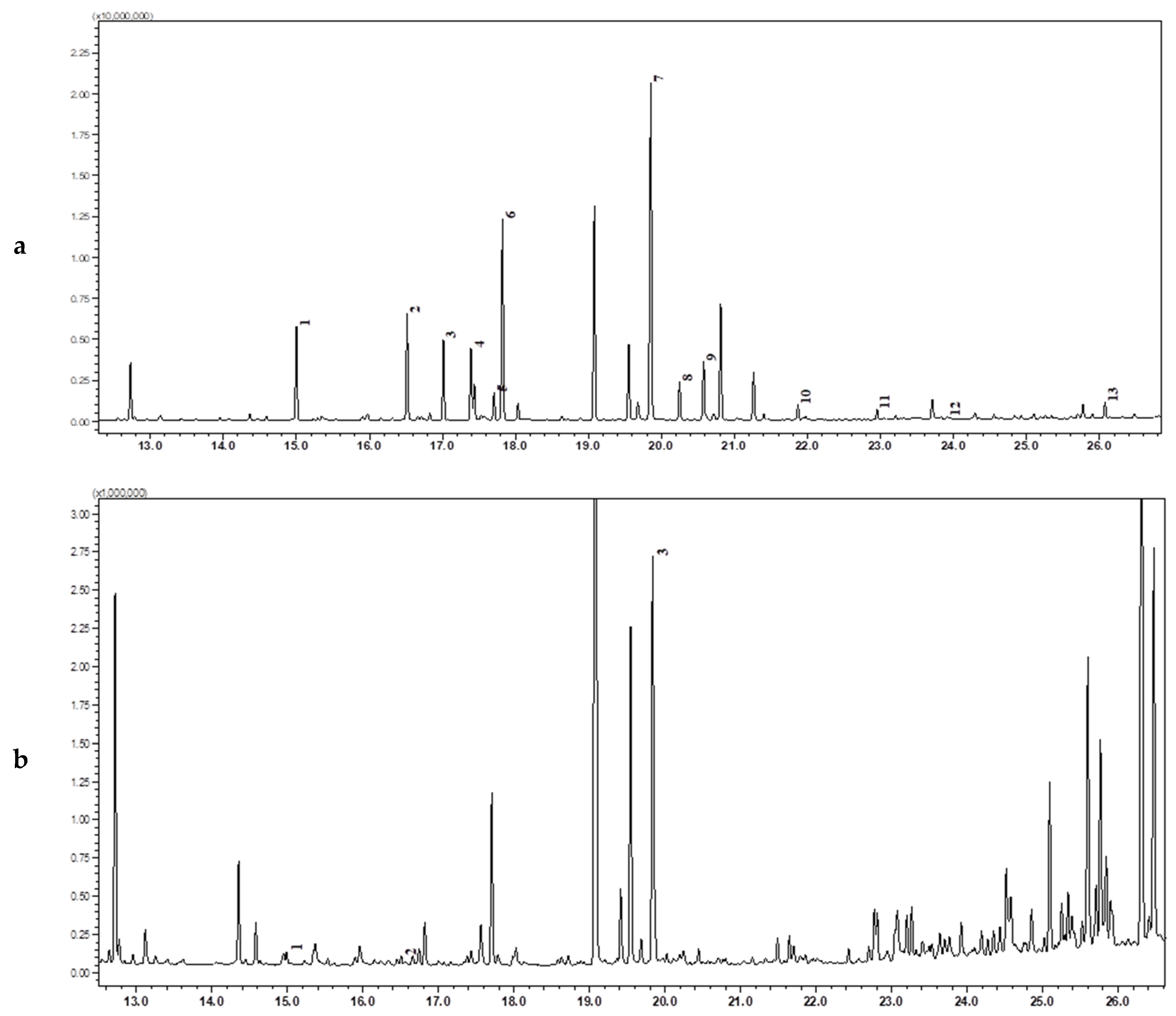 Table 4. Accuracy of GC–MS method.
Table 4. Accuracy of GC–MS method.
© 2020 by the authors. Licensee MDPI, Basel, Switzerland. This article is an open access article distributed under the terms and conditions of the Creative Commons Attribution (CC BY) license (http://creativecommons.org/licenses/by/4.0/).
We use cookies on our website to ensure you get the best experience. Read more about our cookies here.
Accept
We have just recently launched a new version of our website. Help us to further improve by taking part in this short 5 minute survey here. here.
Never show this again