Acknowledgement to Reviewers of Scientia Pharmaceutica in 2018

Proteins play crucial roles in the transportation and distribution of therapeutic substances, including metal ions in living systems. Some metal ions can strongly associate, while others show low affinity towards proteins. Consequently, in the present work, the binding behaviors of Ca2+, Ba2+, Ag+, Ru3+, Cu2+ and Co2+ with bovine serum albumin (BSA) were screened. BSA and the metal ions were allowed to interact at physiological pH and their binding interactions were screened by using FT-IR spectroscopy. Spectra were collected by using hydrated films over a range of 4000–400 cm−1. The interaction was demonstrated by a significant reduction in the spectral intensities of the amide I (C=O stretching) and amide II bands (C–N stretching coupled to NH bending) of the protein after complexation with metal ions. The binding interaction was further revealed by spectral shifting of the amide I band from 1651 cm−1 (free BSA) to 1653, 1654, 1649, 1655, 1655, and 1654 cm−1 for BSA–Ca2+, BSA–Ba2+, BSA–Ag+, BSA–Ru3+, BSA–Cu2+ and BSA–Co2+ complexes, respectively. The shifting of the amide I band was due to the interactions of metal ions with the O and N atoms of the ligand protein. Estimation of the secondary protein structure showed alteration in the protein conformation, characterized by a marked decrease (12.9–40.3%) in the α-helix accompanied by increased β-sheet and β-turn after interaction with the metal ions. The interaction results of this study were comparable with those reported in our previous investigation of metal ion–BSA interactions using affinity capillary electrophoresis (ACE), which has proven the accuracy of the FT-IR technique in the measurement of interactions between proteins and metal ions. View Full-Text
Keywords: bovine serum albumin; FT-IR; metal ions; secondary structure; binding interaction bovine serum albumin; FT-IR; metal ions; secondary structure; binding interaction
►▼ Show Figures 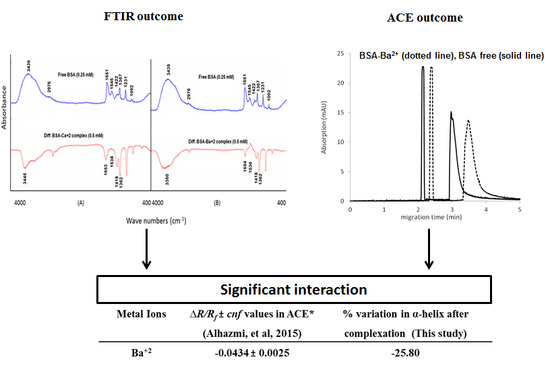 Alhazmi, H.A. FT-IR Spectroscopy for the Identification of Binding Sites and Measurements of the Binding Interactions of Important Metal Ions with Bovine Serum Albumin. Sci. Pharm. 2019, 87, 5.


Alhazmi HA. FT-IR Spectroscopy for the Identification of Binding Sites and Measurements of the Binding Interactions of Important Metal Ions with Bovine Serum Albumin. Scientia Pharmaceutica. 2019; 87(1):5.


Alhazmi, Hassan A. 2019. "FT-IR Spectroscopy for the Identification of Binding Sites and Measurements of the Binding Interactions of Important Metal Ions with Bovine Serum Albumin." Sci. Pharm. 87, no. 1: 5.