Pharmacokinetic Enhancers (Boosters)—Escort for Drugs against Degrading Enzymes and Beyond

:
Hepatocellular carcinoma (HCC) is the second leading cause of cancer-related mortality worldwide. In an attempt to understand some potential mechanisms of persistence and oncogenicity of Hepatitis C virus (HCV)-related HCC, microfibrillar-associated protein 4 (MFAP4), fibrotic indices and oxidative status biomarkers were assessed in the sera of 50 patients with HCV-associated HCC, 25 patients with HCV-related liver cirrhosis and 15 healthy individuals. Serum oxidized Coenzyme Q10 (CoQ10) and malondialdehyde showed significant elevation in HCC patients compared to the control group (p < 0.001), as well as cirrhotic patients (p < 0.05 and p < 0.001, respectively), while serum glutathione content and superoxide dismutase activity were significantly decreased in HCC patients compared to the control group (p < 0.001). Serum MFAP4, aspartate aminotransferase to platelet ratio index (APRI), fibrosis index based on the 4 factors (FIB-4) and Forns index showed significant increase in HCC patients compared to the control group (p < 0.001), while only APRI and FIB-4 were significantly different between HCC and cirrhotic patients (p < 0.05), with a sensitivity of 86% and 92%, respectively, at cut off ≥0.7 for APRI and ≥1.57 for FIB-4. Therefore, increasing oxidative stress and fibrosis might mediate HCV induced cirrhosis and HCC. APRI and FIB-4 may be used as a simple non-expensive formula for the screening of HCC rather than MFAP4.
Keywords:
HCC; MFAP4; fibrotic indices; oxidized Coenzyme Q10; oxidative status

Hepatocellular carcinoma (HCC) is a sophisticated health challenge; it represents the second leading cause of cancer-related mortality worldwide [1]. In Egypt, the National Population-Based Cancer Registry ranks liver cancer as first cancer among males and the second among females after breast cancer [2]. Hepatitis C virus (HCV) attributes to about 90% of the HCC patients in the Egyptian population [3], where Egypt has the highest prevalence of HCV infection in the world (15%) and the main HCV genotype (90%) is type 4 [4].
Hepatic carcinogenesis is a slowly progressive, poorly understood multistep process [5]. Alteration in hepatic microenvironment mediates the carcinogenesis and carries the clues for better treatment strategies [6]. HCV can significantly disturb the cellular redox status which provokes alteration in the liver microenvironment via a change in respiratory, energetic, regenerative capacities, cytokine release, immune response, angiogenesis, collagen genes expression [7,8] and activation of the hepatic stellate cell which is the key in liver fibrogenesis [9].
Oxidative stress, an imbalance between the generation of free radicals and antioxidant defenses, plays a significant role in HCV pathophysiology [10]. CoQ10 is considered the main lipid-soluble antioxidant, which effectively prevents oxidation of lipids, proteins, and DNA [11]. CoQ10 can be easily and reversibly reduced by several dihydronicotinamide adenine dinucleotide phosphate (NADPH) oxidoreductases in both blood and tissues to maintain a high level of the active form (reduced CoQ10) [12]. Reduced CoQ10/total CoQ10 fraction is tightly regulated in healthy adults regardless of age, sex, race or cigarette smoking [13].
The persistent infection with HCV may progress to liver fibrosis [14], a dynamic scarring process due to the accumulation of collagen and extracellular matrix (ECM) proteins, which act as a precursor of cirrhosis and the development of HCC. Many non-invasive methods are used in clinical practice to evaluate liver fibrosis as aspartate aminotransferase to platelet ratio index (APRI) [15], fibrosis index based on the 4 factors (FIB-4) [16] and Forns index [17]. These non-invasive methods were recently introduced in clinical trials for prognosis [18,19], and for diagnosis of HBV-related HCC [20] and HCV-related HCC [21], but up till now no consensus on optimal cut off value for these indices.
Microfibrillar-associated protein 4 (MFAP4) is an extracellular glycoprotein localized to ECM fibers [22]. Since MFAP4 is involved in proper elastin fiber organization [23], the MFAP4 expression is upregulated in fibrotic and cirrhotic septae [22]. Patients with higher amounts of elastin fiber have significantly a higher risk of HCC development [24]. Furthermore, systemic MFAP4 increases significantly with progressive fibrosis stage among HCV infected patients [25] and can be used as a biomarker to assess hepatic fibrosis in HCV patients [26]. However, MFAP4 has not been evaluated before in HCC.
The work is carried out to evaluate the oxidative status and some fibrotic biomarkers in HCV-associated HCC patients, to explore their effects in initiation and progression of HCC, and to evaluate the diagnostic performance of MFAP4 and other fibrotic indices.

This study represents a case-control study. It was carried out from March 2016 to November 2016 with three enrolled groups:
Group I included 50 patients diagnosed with HCC associated with chronic HCV infection at outpatient clinics of Oncology Center of Mansoura University, Mansoura, Egypt.
Group II included 25 patients diagnosed with chronic hepatitis C related cirrhosis without any evidence of HCC at outpatient clinics of Specialized Internal Medical Hospital, Faculty of Medicine, Mansoura University, Mansoura, Egypt.
Group III included 15 healthy individuals as a control group with no apparent evidence of active disease or medical disorders.
All cases involved in this study were clinically, radiologically and pathologically examined in the Oncology Center and the Specialized Internal Medical Hospital, Mansoura University. No prior CoQ10 supplement or HMG-CoA reductase inhibitor was received. Patients with advanced organ failure, any other types of malignancy, advanced medical co-morbidity including diabetes mellitus, hypertension and atherosclerotic cardiovascular disease, active infection and Barcelona Clinic Liver Cancer stage D were excluded from the study. The severity of liver disease was assessed by the Child–Pugh classification [27], and all patients are Child-Pugh score A with performance status ≤ 2 according to Eastern Cooperative Oncology Group Performance Status.
The Research Ethics Committee of the Faculty of Pharmacy, Mansoura University, Mansoura, Egypt reviewed and approved the study on 13 February 2016 with code number 2016-8, which complies with the ethical principles of the 1964 Declaration of Helsinki and its later amendments. Written informed consent was obtained from all participants.

Fasting blood samples were collected from all patients and healthy individuals by vein puncture and then divided into three portions. The first portion was collected in a tube containing ethylene diamine tetraacetic acid for complete blood counts within 5 h. The second portion was collected in tubes containing sodium citrate for determination of prothrombin time within 3 h. The third portion was left to clot for 20–30 min at room temperature, followed by centrifugation at 1700 rpm (Sigma 2–16P) for 15 min to obtain clear non-hemolyzed serum. The serum samples were divided and maintained at −80 °C until use.

All Statistical computations were analyzed using the SPSS version 22 (Chicago, IL, USA), while the graphic presentation of the data was done using Graph Pad Prism version 5 (La Jolla, CA, USA). The results were presented as the mean values ± standard error (SE) for parametric data and the median interquartile range (IQR) for nonparametric data. Student’s t-test was used for comparison between the two groups. One way ANOVA followed by Turkey post hoc test and Kruskal-Wallis were used for comparison between more than two groups. The cut-off value was determined according to the highest sensitivity and specificity of a given marker. Survival analysis was done using the Kaplan–Meier test. p value was considered significant at the level of <0.05, highly significant at the level of <0.01 and extremely significant at the level of <0.001.

3.3. Diagnostic Performance of APRI and FIB-4 in HCC vs. Cirrhotic Patients and Control Group

3.4. Diagnostic Performance of MFAP4 and Oxidized CoQ10 for the Prediction of Dead HCC Patients

3.5. Survival Analysis for MFAP4 and Oxidized CoQ10 in the Prediction of Death in HCC Patients

In conclusion, the present study suggests that oxidative stress status and fibrosis are potential mechanisms for HCV persistence and oncogenicity, which might be targeted for better treatment plans for HCV sequels. HCV induces oxidative stress, which activates HSCs to secrete MFAP4 contributing to liver fibrosis and cirrhosis, a significant cause of HCC. Additionally, APRI and FIB-4 potentially are simple, non-expensive, non-invasive and dynamic surrogates for hepatic fibrosis and screening algorisms for risk of carcinogenesis, unlike the serum level of MFAP4 and Forns index that were not statistically different between HCC and cirrhosis.

The authors acknowledge every participant and technical staff of the biochemistry department for their contribution in this study. 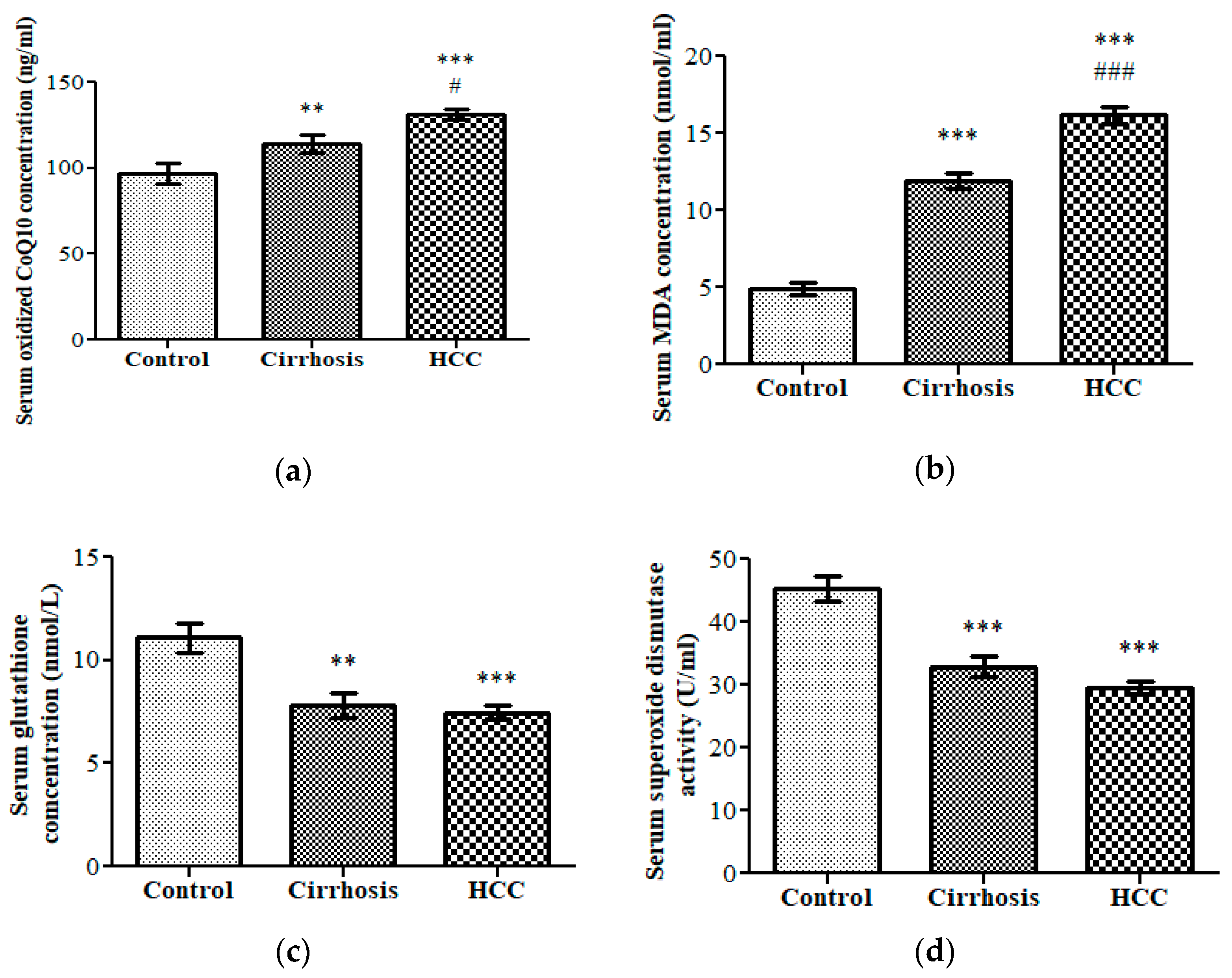