Acknowledgement to Reviewers of Diseases in 2018

Immunological Features in the Process of Blood Platelet-Induced Alloimmunisation, with a Focus on Platelet Component Transfusion

Alloimmunisation to platelet antigens is not uncommon; a large number of females, having had pregnancies, developed antibodies to Human Leukocyte Antigen (HLA) moieties harboured on their foetuses’ cells (inherited from the father(s)) that may conflict with further pregnancies and transfused Platelet Components occasionally. This is possible since platelets constitutionally express HLA class I molecules (though in copy numbers that consistently differ among individuals). Platelets also express HPA moieties that are variants of naturally expressed adhesion and aggregation molecules; HPA differences between mothers and foetuses and between donors and recipients explain alloimmune conflicts and consequences. Lastly, platelets express ABO blood group antigens, which are rarely immunising, however transfusion mismatches in ABO groups seem to be related to immunisation in other blood and tissue groups. Transfusion also brings residual leukocytes that may also immunise through their copious copy numbers of HLA class I (rarely class II on activated T lymphocytes, B cells, and dendritic cells). In addition, residual red blood cells in platelet concentrates may induce anti-red blood cell allo-antibodies. This short review aims to present the main mechanisms that are commonly reported in alloimmunisation. It also critically endeavours to examine paths to either dampen alloimmunisation occurrences or to prevent them. View Full-Text
Keywords: transfusion; platelets; platelet components: haemovigilance; alloimmunisation transfusion; platelets; platelet components: haemovigilance; alloimmunisation
►▼ Show Figures 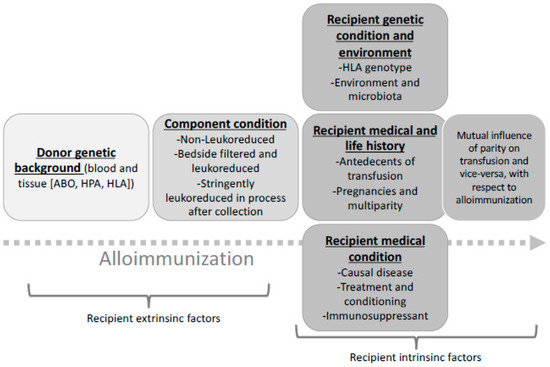