Diseases of the thyroid gland are common, affecting about 5% of the general population, and predominantly affect females [1]. Thyroid gland dysfunction is relatively common during pregnancy. The prevalence of hyperthyroidism is approximately 0.4%, subclinical hyperthyroidism about 3.3% [2], hypothyroidism about 0.3% [3], and subclinical hypothyroidism may reach 2.5% or more [4].
Dietary adequacy is different among different geographical areas in the world. The World Health Organization (WHO) estimates that two billion people are iodine-deficient [5], and hypothyroidism due to iodine deficiency can occur at any time in life, but the most critical period is when it occurs during fetal development and early childhood. When occurring early in pregnancy, hypothyroidism and the development of thyroid autoantibodies during pregnancy associated with maternal morbidity later in life [6]. Treated maternal hypothyroidism is not associated with adverse perinatal outcome [7].
The significance of detecting maternal thyroid abnormalities during pregnancy is that hypothyroidism may be associated with miscarriages, low birth weight, anemia, pregnancy-induced hypertension, preeclampsia, abruption placenta, postpartum hemorrhage, congenital circulation defects, fetal distress, preterm delivery, and poor vision development, in addition to the probable neuropsychological defect in the child [8,9,10].
Current guidelines advocate thyroid stimulation hormone (TSH) as a nearly universal thyroid screening test in non-hospitalized patients with intact hypothalamic/pituitary function [11]. In addition, thyroid hormones should also be measured to clarify the picture of thyroid dysfunction when indicated.
Currently, total tetraiodothyronin(T4) is preferred over free T4 in the pregnancy period after adjustment by a factor of 1.5 to compensate for the expected thyroxin-binding globulin (TBG) elevation [10]. Thyroid function test results of healthy pregnant women differ from those of healthy non-pregnant women. This calls for pregnancy-specific and ideally trimester-specific reference intervals for all thyroid function tests, but in particular for the most widely applied tests, TSH, free T4, total T4, and total triiodothyronin (T3) [12].
Studies have shown that hypothyroxinemia during pregnancy is associated with adverse outcome, and women with thyroid autoimmunity are at increased risk of pregnancy complications, thus thyroid function assessment in anti-thyroid peroxidase antibodies(anti-TPO) positive pregnant women seems beneficial [13,14]
Although screening for thyroid dysfunction in healthy non-pregnant woman is not recommended, thyroid screening in pregnancy is controversial. Some suggest targeted screening (case finding) of only the high-risk group, while others recommend TSH screening for all pregnant women by the ninth week of gestation or at the time of their first visit [15,16].

This study was done between January 2014 and June 2015. Participants for this cross-sectional study were apparently healthy pregnant women selected from women attending primary health centers (PHC), hospitals, out-patient clinic, and private gynecologic clinics in the city of Basrah (southern Iraq).
Instructions were given to the primary care doctors and specialists to refer pregnant women attending routine antenatal visits to assess their thyroid status at the Al-Faiha Specialized Diabetes, Endocrine, and Metabolism Center (FDEMC).
This study involved 893 selectively referred pregnant women; 31 of them were further excluded after detailed history and physical examination, and 9 women were also excluded because of high TSH value >10 μIU/mL. A total of 643 women were tested for anti-TPO; of them, only 103 patient tested positive, while the remaining 540 women distributed throughout different trimesters of pregnancy, 123 women in the first trimester, 246 women in the second trimester, and the remaining 171 women in the third trimester.
After ensuring patient acceptance to participate in the study, 3–5 mL venous blood samples were taken using a tube that contained clot activator from the pregnant women, and then centrifuged to be assayed on the same day. In addition to patient sampling, pregnant women were also subjected to physical examination and brief questionnaire including some parameters useful in the study. All information taken from the pregnant women have been stored in computerized systems at FDEMC.
Each patient included in the study was sampled once during her pregnancy and was not sampled again throughout the same pregnancy; this is to avoid missing patient follow-up, to enlarge sample size, and to increase sample variety.

Subject inclusion criteria (Figure 1) are apparently healthy pregnant women with uncomplicated single intrauterine gestations. The first trimester was considered from Weeks 1–12, second from Weeks 13–27, and Weeks 28–40 constituted the third trimester. All subjects provided verbal informed consent, and the research protocol was approved by the University of Basrah.

Women with the following criteria were excluded:

All biochemical tests were completed using an ECL technique with commercially available kits from Roche Diagnostics (Germany) with cobas e 411 analyzer. The hormonal analysis was done in the FDEMC.

For statistics, all data were computed and analyzed using SPSS, (version 15.0, SPSS Inc., Chicago, IL, USA). Continuous variables were summarized as the mean (± standard deviation (SD), and categorical variables were summarized as a percentage. The range of 5th to 95th centile was considered the reference range for each test separately. One-Way analysis of variance (one-way ANOVA) was used to compare mean.

The authors were grateful for the medical staff of FDEMC and received no funds to cover the study. 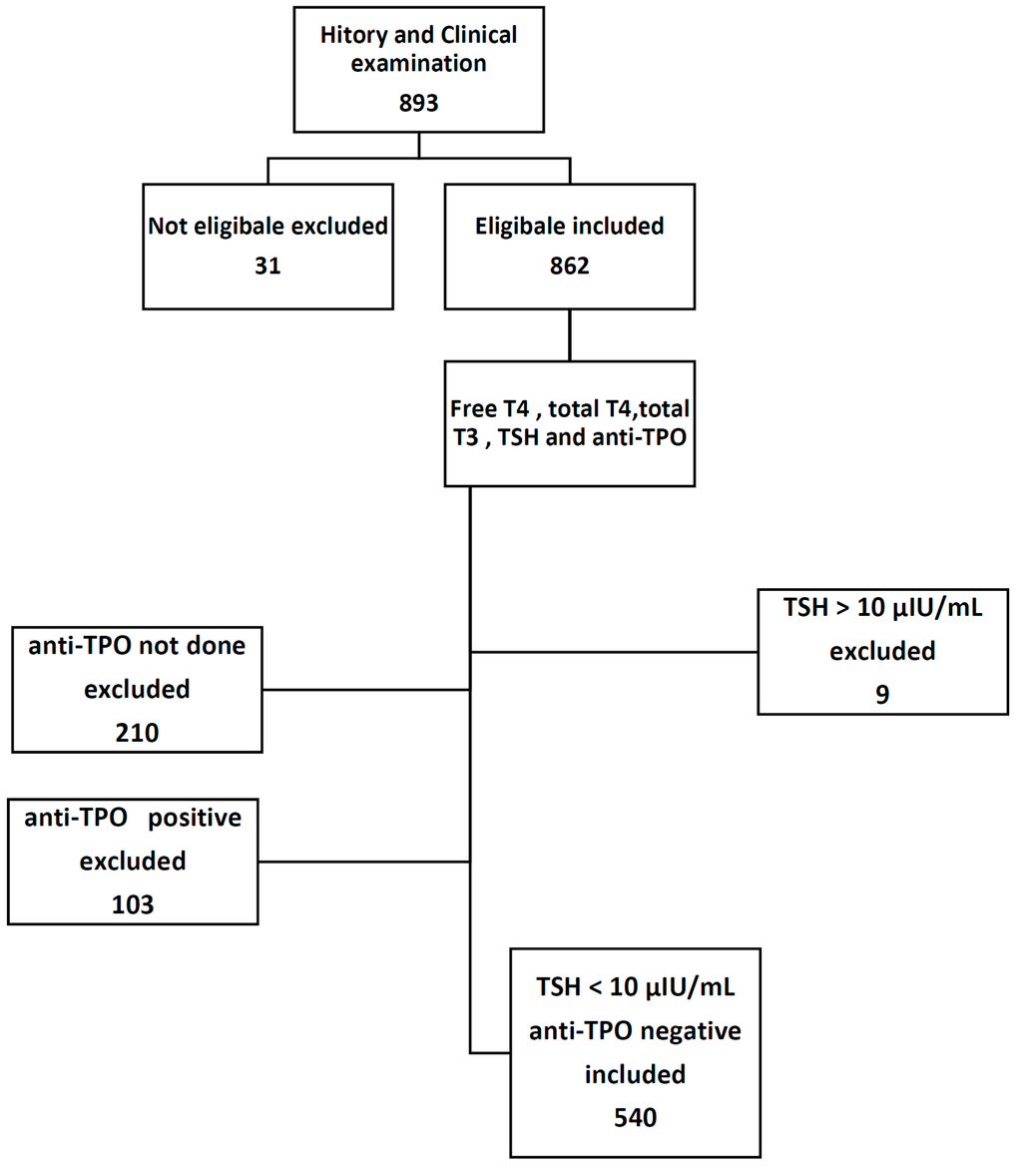 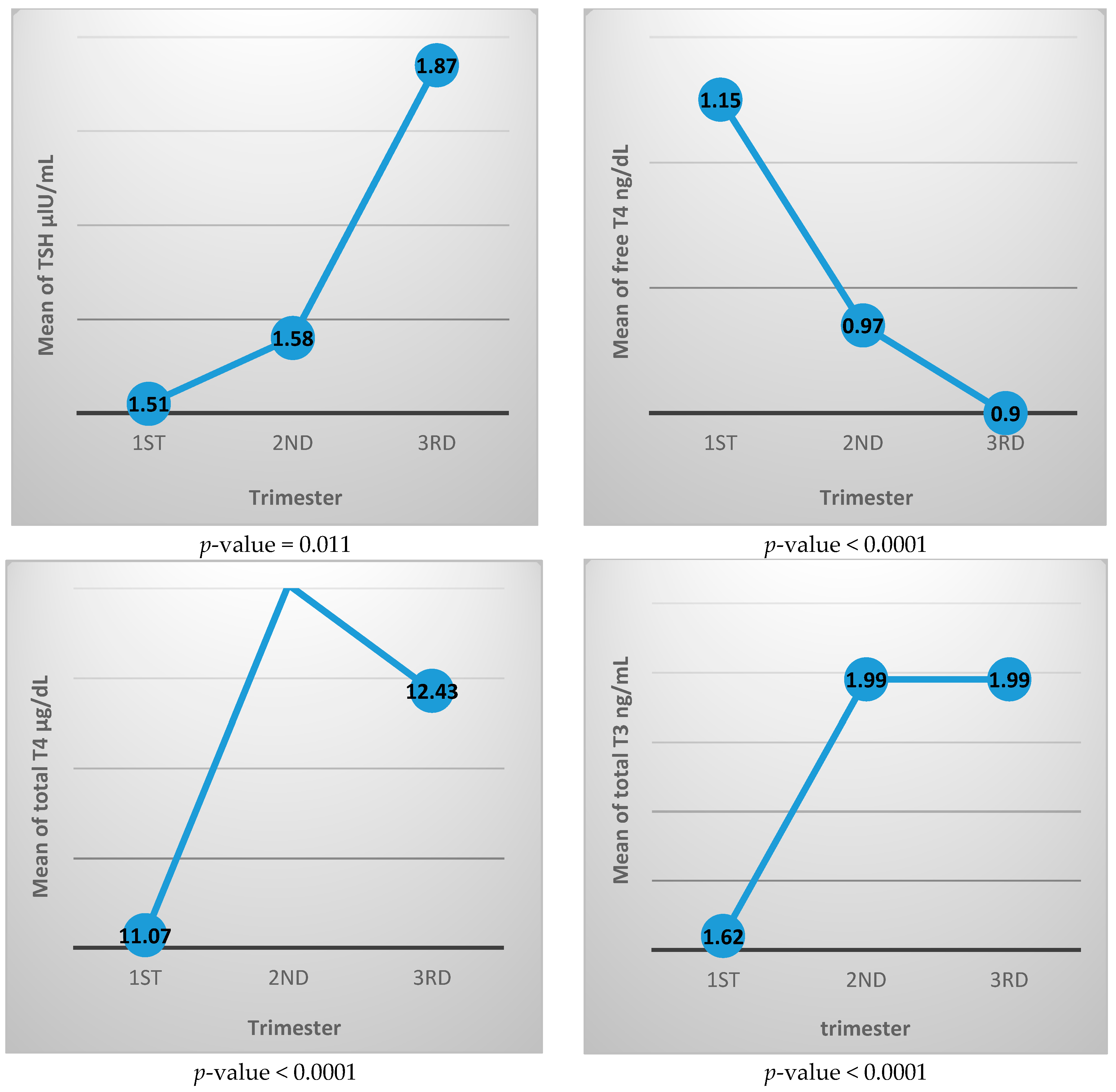 Table 2. The mean values of thyroid function test parameters per each trimester.

Table 3. The 5th and 95th centile values of thyroid function tests parameters per each trimester.