Decentralized wireless networks are gaining increasing popularity as they do not need a fixed infrastructure. Simultaneously, multiple research initiatives have led to different findings at the PHY layer of the wireless communication systems, which include Multi-Packet Reception (MPR) techniques that enable a receiver to decode multiple packets that are transmitted simultaneously. However, the distributed nature of decentralized wireless networks demands different network control policies that should take into account the MPR capabilities to increase the network performance. This work studies the performance of a wireless network composed of multiple transmitters that are willing to transmit to a single receiver. This receiver has MPR capability and adopts an Energy-based Sensing (EBS) technique to enable uplink users’ transmissions without interfering with the ongoing transmissions from other transmitters. The first remark to be made is that the MPR technique performance depends on the channel propagation conditions and on the amount of time the receiver needs to detect the spectrum’s occupancy state. However, it is shown that by increasing the number of samples needed to increase the sensing accuracy, the receiver may degrade its throughput, namely if the receiver is equipped with a single radio, that is sequentially used for sensing and transmitting (split-phase operation). The results presented in the paper show the impact of the channel propagation condition and EBS parameterization on wireless network throughput and the cases where the receiver MPR capture performance is greatly improved by the use of a spectrum sensing technique. View Full-Text
Keywords: multi-packet reception; spectrum sensing; aggregate interference multi-packet reception; spectrum sensing; aggregate interference
►▼ Show Figures 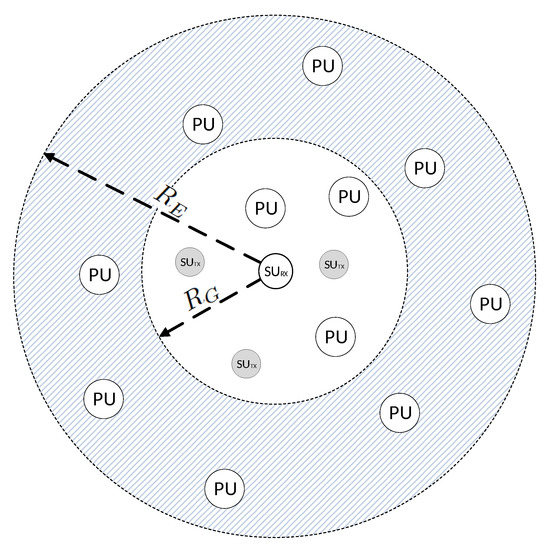