Waste Picker Organizations and Their Contribution to the Circular Economy: Two Case Studies from a Global South Perspective
Next Article in Special Issue

Ranking of Sustainability Indicators for Assessment of the New Housing Development Projects: Case of the Baltic States
Previous Article in Journal / Special Issue

Properly managed biopiles can be used for slaughterhouse-residual degradation and bacterial pathogen inactivation, which otherwise represent a major health risk in the environment. Biopiles were used to dispose of slaughterhouse-residuals and determine the occurrence and persistence patterns of indicators of pathogenic bacteria. The indicator bacteria included the family Enterobacteriaceae, total coliforms, Escherichia coli, nalidixic acid-resistant E. coli, and Streptococcus fecalis. The slaughterhouse-residual biopiles remained static for 164 d in 2006 and 141 d in 2007. In biopile effluent samples, exponentially decreasing populations of the indicator bacteria were observed. Indicator bacteria presence in biopile and soil samples suggested their retention and persistence in, but not migration from, the media. Though the family Enterobacteriaceae, total coliforms, and Escherichia coli shared behavioral correlations, they exhibited different fates in all media compared to S. fecalis, which was observed to persist and re-grow. The behavior of inoculated nalidixic acid-resistant E. coli suggested that inactivation was the primary process in the biopiles. However, the biopiles constituted continual sources of the indicator bacteria due to their persistence in isolated and protected locations, and changes in dominant species. While biopiling slaughterhouse-residuals was effective to inactivate >99% (log reductions) of indicator bacteria, tertiary methods and biopiling phases should be employed to ensure inactivation of pathogenic bacteria in animal waste biopiles. The fate of bacterial indicators in this system exhibited trends not-as-yet observed for animal waste biopiling activities, which generates numerous questions for further research. View Full-Text
Keywords: occurrence; persistence; bacteria; livestock; slaughterhouse; coli; strepto occurrence; persistence; bacteria; livestock; slaughterhouse; coli; strepto
►▼ Show Figures 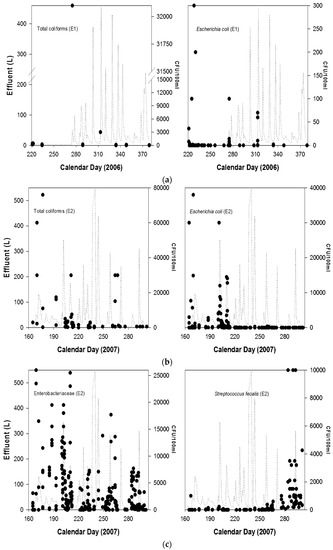