Collaborative Consumption: Towards a Resource-Saving Consumption Culture
Next Article in Special Issue

The amphibian Xenopus has long been a comparative model system of choice for a number of different biological research areas, including immunology. Specifically, the evolutionary distance between amphibians and mammals, including humans, allows for the study of both species-specific adaptations, as well as conserved features of the immune system. Furthermore, the Xenopus genus includes species with multiple levels of polyploidy, thereby providing a unique model to study whole genome duplication and its effects thereof on individual genes. To better exploit this amphibian model, the development and innovative applications of novel research tools have been a priority. In this regard, recent advances in adapting the transgenesis approach to Xenopus have allowed for in vivo studies of the impact of loss and gain of function of specific genes at the level of the whole organism, further enhancing the potential uses of Xenopus as an important biomedical model system. This review highlights some of the major uses and applications of the Xenopus model. View Full-Text
Keywords: Xenopus; biomedical model; transgenesis Xenopus; biomedical model; transgenesis
►▼ Show Figures 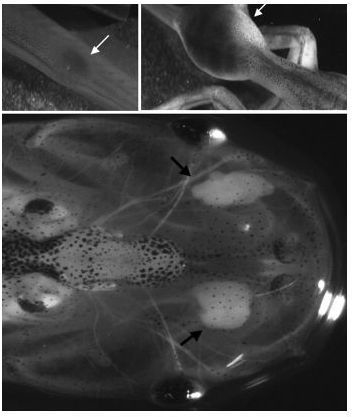 
Edholm, Eva-Stina; Robert, Jacques. 2013. "Recent Research Progress and Potential Uses of the Amphibian Xenopus as a Biomedical and Immunological Model System." Resources 2, no. 3: 167-183.