Exaptation of Retroviral Syncytin for Development of Syncytialized Placenta, Its Limited Homology to the SARS-CoV-2 Spike Protein and Arguments against Disturbing Narrative in the Context of COVID-19 Vaccination

The anti-vaccination movement claims an alleged danger of the COVID-19 vaccine based on the presupposed similarity between syncytin, which plays a role in human placentation and the SARS-CoV-2 spike protein. We argue that because of very low sequence similarity between human syncytin-1 and the SARS-CoV-2 S protein, it is unlikely that any S protein-specific SARS-CoV-2 vaccine would generate an immune response which would affect fertility and pregnancy. However, further evaluation of potential impacts of COVID-19 vaccines on fertility, placentation, pregnancy and general health of mother and newborn is required.

Human placenta formation relies on the interaction between fused trophoblast cells of the embryo with uterine endometrium. The fusion between trophoblast cells, first into cytotrophoblast and then into syncytiotrophoblast, is facilitated by the fusogenic protein syncytin. Syncytin derives from an envelope glycoprotein (ENV) of retroviral origin. In exogenous retroviruses, the envelope glycoproteins coded by env genes allow fusion of the viral envelope with the host cell membrane and entry of the virus into a host cell. During mammalian evolution, the env genes have been repeatedly, and independently, captured by various mammalian species to facilitate the formation of the placenta. Such a shift in the function of a gene, or a trait, for a different purpose during evolution is called an exaptation (co-option). We discuss the structure and origin of the placenta, the fusogenic and non-fusogenic functions of syncytin, and the mechanism of cell fusion. We also comment on an alleged danger of the COVID-19 vaccine based on the presupposed similarity between syncytin and the SARS-CoV-2 spike protein. View Full-Text
Keywords: placenta; syncytin; spike protein; retrovirus; SARS-CoV-2; COVID-19 vaccine placenta; syncytin; spike protein; retrovirus; SARS-CoV-2; COVID-19 vaccine
►▼ Show Figures 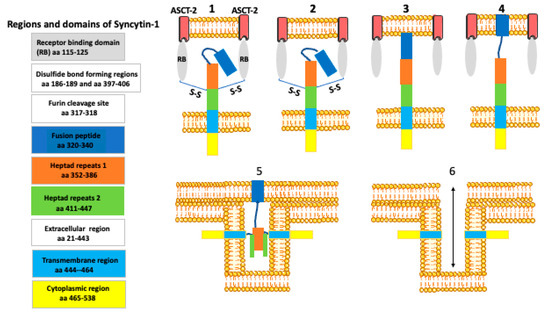 Kloc, M.; Uosef, A.; Kubiak, J.Z.; Ghobrial, R.M. Exaptation of Retroviral Syncytin for Development of Syncytialized Placenta, Its Limited Homology to the SARS-CoV-2 Spike Protein and Arguments against Disturbing Narrative in the Context of COVID-19 Vaccination. Biology 2021, 10, 238. https://doi.org/10.3390/biology10030238


Kloc M, Uosef A, Kubiak JZ, Ghobrial RM. Exaptation of Retroviral Syncytin for Development of Syncytialized Placenta, Its Limited Homology to the SARS-CoV-2 Spike Protein and Arguments against Disturbing Narrative in the Context of COVID-19 Vaccination. Biology. 2021; 10(3):238. https://doi.org/10.3390/biology10030238


Kloc, Malgorzata, Ahmed Uosef, Jacek Z. Kubiak, and Rafik M. Ghobrial. 2021. "Exaptation of Retroviral Syncytin for Development of Syncytialized Placenta, Its Limited Homology to the SARS-CoV-2 Spike Protein and Arguments against Disturbing Narrative in the Context of COVID-19 Vaccination" Biology 10, no. 3: 238. https://doi.org/10.3390/biology10030238